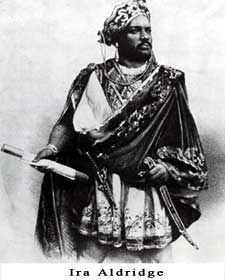 The black actor Ira Aldridge is now recognised as one of the most remarkable interpreters of Shakespeare’s leading roles. He first appeared on the London stage as Othello in 1825, and remained associated with the role for the rest of his life.  The critics’ reviews were patronising and racist, but Aldridge took advantage of even the negative comments, taking The African Roscius as the title by which he became universally known.

He was always popular with audiences who found his physical acting style exciting, and his appearance powerful and exotic. He encouraged the legend that he had been born in Senegal, descended from an African prince whose family was forced to escape to America to save their lives, while the mundane truth was that he was born in New York in 1807 of poor parents. Finding it was impossible to pursue an acting career in America he came to England at the age of 17 determined to make his name. 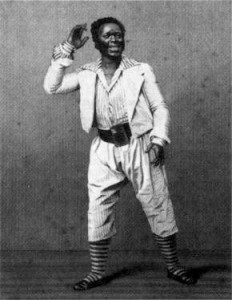 Ira Aldridge as Mungo in Padlock

Following poor notices in London, but taking advantage of the interest in himself, he toured relentlessly, including a visit to Stratford in 1851. He performed at the Royal Shakespearian Theatre in Chapel Lane for a week at the end of April and early May, with one performance of Othello followed by farces and melodramas including Slave, or the revolt of Surinam, Padlock, and Revenge, or the Captive Moor.  While in Stratford he visited Shakespeare’s Birthplace, signing the Visitors’ Book on 2nd May “Ira Aldridge: the African Tragedian, Senegal, Africa.” He included a quote by the Prince of Morocco in The Merchant of Venice:  “Mislike me not for my complexion, the shadowed livery of the burnished sun”. Both his wife and son also signed the book.

Elsewhere he extended his range, performing Shylock, Macbeth and King Lear, and rather bizarrely had to “white up” for these roles. Titus Andronicus was largely rewritten so that Aaron the Moor, the villain of Shakespeare’s play, could be played by Aldridge as its hero.

For the last 15 years of his life he toured the Continent with great success, spending much time in Russia. This review appeared in a newspaper in St Petersburg, where he performed 31 times in a month.

No sooner did the Moor make his appearance, than I felt myself, I confess it, instantly subjugated, not by the terrible and menacing look of the hero, but by the  naturalness, calm dignity, and by the stamp of power and force that he manifested.

Engravings of Aldridge usually highlit the noble, dignified side of Othello. However he did little to dispel the rumour that he had actually killed some of the actresses playing Desdemona. In one of his last UK performances Madge Robertson (later Mrs Kendal) played the role at the Haymarket in London, and in her memoirs she described how he would take her out of the bed and drag her around the stage by her hair before smothering her.

Aldridge’s foreign tours encouraged translations of Shakespeare into some European languages for the first time. He was showered with honours by many European heads of state, and was entitled to the title Chevalier Ira Aldridge, Knight of Saxony.

He died in the Polish town of Lodz in 1867.  Memorials in this country are few, but in Stratford, a plaque for him is on the back of one of the seats in the Royal Shakespeare Theatre.

Aldridge was a true ambassador for Shakespeare, bringing his work to audiences who had never encountered him before. Shakespeare too enabled Aldridge’s career to progress beyond the conventional fare of Victorian theatre to major roles which allowed audiences to see that “a gentleman of colour” could also be a great actor.

4 Responses to Ira Aldridge, Shakespearean actor and gentleman of colour