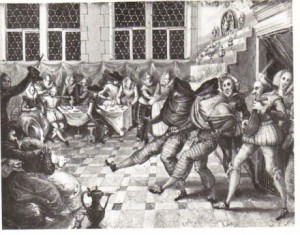 A few weeks ago Dr Robert Bearman wrote a piece for this blog explaining that he had rediscovered some evidence about touring companies visiting Stratford-upon-Avon in Shakespeare’s lifetime. He’s now found some more intriguing evidence relating to Stratford Corporation’s attitude to playing companies which he’s sharing with readers of this blog.

Growing hostility on the part of the Stratford-upon-Avon authorities towards travelling troupes of players is apparently already well documented. Until 1598, the annual accounts of the borough chamberlains are peppered with fairly regular payments to visiting companies. But then, in 1602, we have a Corporation order forbidding further performances on Corporation property on pain of a fine of 10 shillings, raised to a massive £10 by a further order in February 1612. As if in confirmation of this growing hostility, the King’s Men, were paid six shillings in 1622 for not performing in the Gild Hall.

However, as is often the case, things may not have been quite as simple. In getting together material for the next volume of Minutes and Accounts of the Stratford Corporation, several pieces of evidence, hitherto overlooked, suggest a more complex picture. For instance, no-one seems to have noticed that in the Corporation’s elaborate book of orders, issued in July 1612, the fine of £10, so recently announced, for allowing a performance on Corporation property, was within months reduced to 40 shillings. This was still four times higher than that imposed by the original order of 1602, but on reflection had perhaps been deemed a more appropriate penalty. The inference here is of an initial knee-jerk reaction following a disorderly, albeit unrecorded, public entertainment in February, followed by a more sober assessment of the situation. 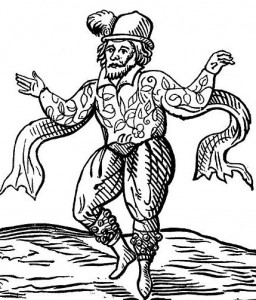 But forbidding performances on Corporation property was not the same as keeping players out of the town. In confirmation of this, we find that, in 1618, the Corporation, on the bailiff’s appointment, paid one company of players 5 shillings and another 3s 4d. Even more surprising was to find, in a set of accounts which we have now been able to date to 1620, a payment of 6 shillings, again by the bailiff’s appointment, to another troupe. Given that the well-publicised payment in 1622 to the King’s Men was for not playing in the Gild Hall, it may well be that these payments of 1618 and 1620 were made in the same spirit: namely, that, although the Corporation could prevent performances on its property, it was still thought advisable to keep the players on-side through a continuing, if tempered, display of patronage. This is of particular interest as it was in May 1619 that the Corporation’s Puritan majority managed to displace the easy-going minister, John Rogers, with the more radical Thomas Wilson, leading to civil disturbance and the publication of libellous pamphlets attacking the Puritan tendencies of several Corporation stalwarts; on the face of it, an unlikely time for a compromise on the issue of travelling players.

It just goes to show how misleading even official documentation can be unless put in its context by an expert. With so many documents having been lost caution is always advisable.

If you’re interested in acquiring a copy of Dr Bearman’s excellent book Minutes and Accounts of the Stratford Corporation 1599-1609, please contact Cathy Millwood, at dugdale-society@hotmail.co.uk . Readers of this blog will be able to acquire it at the bargain rate of £30, a discount of £5 off the normal price.

One Response to Players in Stratford-upon-Avon: Robert Bearman’s latest discoveries