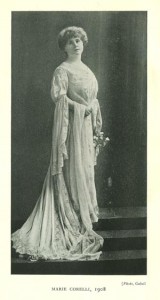 Today is World Book Day, so it’s a good opportunity to look at an author, almost forgotten now, but who 100 years ago outsold just about everybody.

Stratford-upon-Avon 100 years ago attracted literary tourists who were interested, not in Shakespeare, but in a living novelist. Marie Corelli was a prolific writer who made a fortune from the 20-or-so novels that she wrote in a style that has been described as “over-written exotic romantic fantasy”. She came to live in Stratford at the height of her fame in 1899, seeking a soothing place to live and work. From Hall’s Croft, she later moved to Mason Croft where she lived until her death in 1924.

Marie was a larger than life character who sometimes seemed to confuse fact and fiction. She certainly invented herself. The truth of her birth and early years are still not known, but it appears she was born Minnie Mackay, in 1855, the illegitimate daughter of the minor but respected author Charles Mackay. Although a bright and charming child she had a lonely childhood with no friends of her own age who might have brought her down to earth. 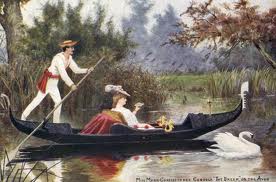 At some point she began calling herself Marie Corelli, claiming Italian descent, and had a short career as a pianist before deciding to pursue writing. Her love of all things Italian led her, while living in Stratford, to buy a gondola from Venice, complete with Italian gondolier who took her up and down the Avon.

It’s easy now to mock her way of life and aspirations. She longed to be respected as a professional author, but her books, although wildly popular, were never taken seriously. Lacking a sense of humour, she was both aggressively insensitive to others’ feelings and oversensitive herself when she met opposition.

In Stratford, locals were initially flattered by the famous author taking up residence in the town, but the honeymoon was short-lived. Marie took on all comers when it came to preserving any part of the town which dated back to Shakespeare’s day, and had public rows with people through the pages of the local newspaper. Mr T Edgar Pemberton wrote “This curiously angry lady would have us believe that until she chose to reside at Stratford, no one did anything for the township, and the memory of Shakespeare”, before listing some of the buildings which had been successfully restored without her assistance. 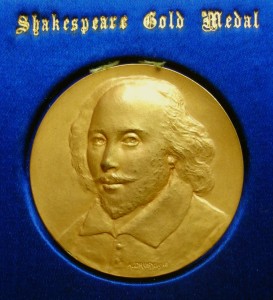 She attempted to encourage local appreciation of Shakespeare in 1919 by sponsoring an annual Shakespeare essay competition at his old school, the winners to be awarded medals. The winner of the final gold medal was my father, Eric Tompkins. He found the experience of collecting his medal from Mason Croft intimidating to say the least.

A few years ago, tucked into his copy of a biography of Marie Corelli, I found the original exam paper, five pages long. It’s full of leading questions from which it’s easy to see her opinions: “Has the deer-stealing episode any foundation in fact? Considering the manner in which Sir T Lucy was employed at this time, are there not other reasons for Shakespeare’s departure from Stratford than the legendary deer-stealing?”

And on the authorship question, “Did Ignatius Donelly visit Stratford before or after his book entitled “The Great Cryptogram?” Was he not under the impression that the Grammar School was a Dame’s School kept by a couple of illiterate old ladies? When the true position of the Grammar School was pointed out to him, is it not a fact that he left Stratford and England at once – never to return?” 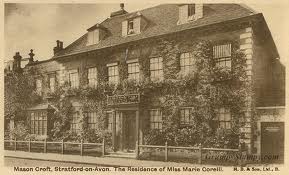 Mason Croft as it was when lived in by Marie Corelli

Marie Corelli wanted Mason Croft to be preserved as a shrine, the house to provide lodgings for distinguished persons in literature or science visiting Stratford. After the death of her devoted companion, Bertha Vyver, in 1942, Marie’s will was declared void, and the house’s contents were sold. By a stroke of good fortune the building now houses the Shakespeare Institute, part of the University of Birmingham, devoted to the study of Shakespeare, and where her music room is still used for recitals, lectures and performances.

And perhaps Marie Corelli’s hopes for her competition did bear fruit. My father became a scientist, working in industry, but all his life he read, listened to and attended performances of the plays, gave lectures on Shakespeare’s life, and of course instilled in me a love of Shakespeare too.

7 Responses to Marie Corelli and Shakespeare on World Book Day