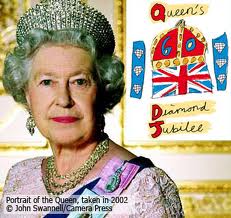 This weekend we celebrate the Diamond Jubilee of our Queen, and the media have made many references to the other massively influential English monarch who ruled for sixty years, Queen Victoria. Queen Elizabeth II doesn’t pretend to take a great interest in the theatre, though her eldest son makes up for her by being a real enthusiast for Shakespeare and the work of the Royal Shakespeare Company.  He gave the Annual Shakespeare Birthday Lecture in Stratford-upon-Avon in April 1991, later that year became the Company’s President, and regularly attends performances of the plays. 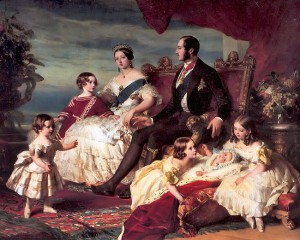 Queen Victoria with Albert and her family, 1846

Queen Victoria though was enthusiastic about the theatre and other entertainments. Farces, circus acts and melodramas were her favourites when young, but Prince Albert was a knowledgeable enthusiast for Shakespeare’s works and his taste rubbed off on her. She was impressed by King John, a play full of patriotic sentiment, and she judged Richard III “a fine heart-stirring play”. In the early years of her reign W C Macready was the most important actor in the country, a fine tragedian who undertook the restoration of Shakespeare’s texts as written after a century and a half when theatre audiences had seen mangled versions of them. One play which Macready was commanded to perform before the Queen was As You Like It in which he took the part of the melancholy Jaques. She sometimes attended the public theatres, attracting bumper audiences and creating something of a security risk, but otherwise plays were performed at Windsor Castle. 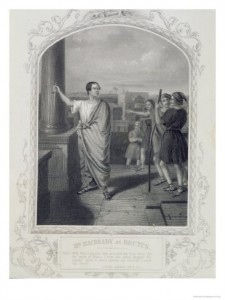 In 1850 a series of plays were performed under the direction of Charles Kean, the son of Edmund Kean and an established actor in his own right. On this occasion Macready performed Brutus in Julius Caesar. Charles Kean received royal favour, and the Queen visited his theatre on a number of occasions. When Macready retired from the stage in 1853 Samuel Phelps seemed to inherit Macready’s status, but never the same level of royal patronage.

Other performances are recorded: Charles Dickens, with his company of amateur friends performed Ben Jonson’s farce Every Man in His Humour twice, and during the 1850s Dickens appeared in Wilkie Collins’ play The Frozen Deep before Victoria and Albert, a performance which she was to remember for many years.

Then in 1861 Albert died, and there was no more frivolity. Her mourning lasted decades, but in the last twenty years of her long reign her interest in the theatre revived. From 1881 command performances at Windsor and Sandringham resumed, and it’s recorded that Henry Irving and Ellen Terry performed in front of her at her Isle of Wight home, Osborne House. I’ve written before about the Queen’s longstanding friendship with the actress Helena Faucit, and we shouldn’t forget that it was during her reign that the acting profession finally achieved respectability when in 1895 she knighted Henry Irving.

Queen Victoria’s reputation is of a prudish and disapproving woman: you can see this from the items reproduced on the Folger Shakespeare Library’s pages on Queen Victoria, Shakespeare and the Ideal Woman.

But in recent years her diaries and correspondence have revealed a different side to Victoria, just as recently-released home movies have shown us a softer side to our present Queen.