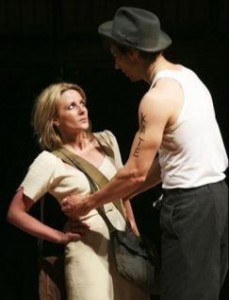 Outgoing Artistic Director Michael Boyd recently announced his last planned season for the Royal Shakespeare Company in 2013. In an interview he stated that “The theme of the season is heroines”, as several of the plays feature dominant women, and with no fewer than five of the eight plays being directed by women, it will be “a celebration of women in the theatre”. Three of the plays are Shakespeares, and will be performed in the RST: The Winter’s Tale, directed by Lucy Bailey, As You Like It, directed by Maria Aberg and All’s Well That Ends Well directed by Nancy Meckler.  Some people have commented that the emphasis on women is long overdue.

Stratford-upon-Avon’s record for employing women directors has never been good. In her 1998 book MsDirecting Shakespeare, Elizabeth Schafer commented “Women directors have been particularly scarce on the often maligned main stage at Stratford”,  and up to the time of her book only six women had directed in the RST.

Perhaps we can blame this on the fact that the house dramatist is male, and his major characters are men. The shortage is mostly in the rehearsal room, as quite a number of women have held influential roles within the organisation, from Lady Benson back in the early years of the Memorial Theatre to administrators like Elsie Beyer in the 1940s and women Governors like Ellen Terry and Lady Flower. Nobody though has ever come close to the career of Lilian Baylis at the Old Vic in London. 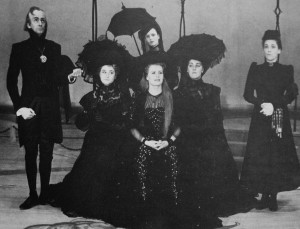 Viola and her household in Twelfth Night, Shakespeare Memorial Theatre 1939

I’ve been looking back at the two earliest female directors to work in Stratford, Irene Hentschel and Dorothy Green. Their careers at the Shakespeare Memorial Theatre as it was then neatly book-end the second world war. Hentschel was already a well-known director, mostly of Ibsen, and her 1938 production of J B Priestley’s play Time and the Conways had been a success in London. She was invited to direct Twelfth Night in 1939.  The newspapers concentrated on the fact that she was both a newcomer and the first woman to direct at Stratford, but she was not intimidated. One critic wrote that Hentschel “has celebrated the occasion by kicking up her heels with gay abandon”. It was a production that refused to be conventional. Instead of the usual dignified mature lady, Lesley Brook played Olivia as an immature girl. Olivia’s household looked severe, but “the primness is all on the surface. Ruffle it to the least degree, and in…Olivia you discover a warm-blooded girl”.

The designers, the all-female team Motley, designed the costumes to reflect the characters rather than setting the play in a single period, so Orsino was Byronic, Malvolio Dickensian, and Toby Belch Edwardian. Their set made the most of the capabilities of the new theatre (then only 7 years old). Using the stage lift, the garden set could be raised to reveal the kitchen set underneath, connected by a wrought-iron spiral staircase. Reviewers were unsettled by the director’s unusual approach, admitting it was refreshing – but perhaps in the build-up to the war reassurance would have been more welcome than innovation.

The second female director was Dorothy Green. She was well known and popular, having acted major roles such as Cleopatra both in Stratford and London over several decades. Her 1943 production of The Winter’s Tale is almost lost: the prompt book still exists but there are hardly any photographs and only a few reviews. This absence has more to do with the reality of a nation at war than Green’s production. What reviews there are talk about its dignity and restraint, and the fine performances she drew from Baliol Holloway as Autolycus and Abraham Sofaer as Leontes. 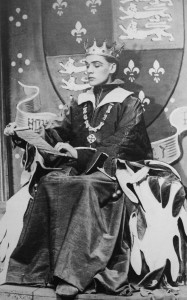 After the end of the war she was given another chance, directing Henry V in 1946 with the rising star Paul Scofield in the lead. This was a tricky play to direct, with the stirring wartime Olivier film fresh in people’s memory. No stage version was going to be able to compete, and Green wisely took a different approach to appeal to audiences tired of war. It was judged “straightforward Shakespeare, relying on the spoken word rather than a producer’s tricks”, and Scofield, a lyrical rather than a bravura performer, excelled in the night scene before Harfleur and the courtship of the French princess. The Stage commented “it gives Henry more appeal for a war-scorched generation than he could otherwise command”. The subtle production “did not soar… but neither did it crawl”. After the war, women were encouraged to resume lives of domesticity rather than continue to do “men’s jobs”, and it’s this, rather than any failing by either of these two women, that resulted in a delay of ten years before another woman was to direct.

This lack of opportunity must have had a long term effect on women’s ability to make progress in the theatre except on the stage itself. Even there, as Janet Suzman suggests, apart from a handful of great roles like Lady Macbeth and Cleopatra, female roles are less rewarding than those for men. These roles would have been challenging, to say the least, for boys to play. Who knows what Shakespeare would have come up with if he’d been able to write for more powerful women actors?

As I write this blog post it has been announced that a woman, Erica Whyman, has been appointed RSC Deputy Artistic Director to join Gregory Doran’s new team in January 2013. This news should ensure that under Doran the development of women at the RSC will continue to grow.

4 Responses to Here come the girls: women directors at the Royal Shakespeare Company