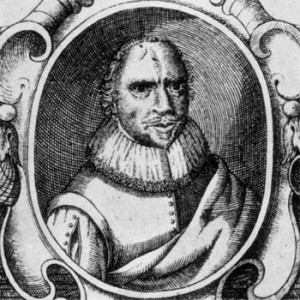 John Taylor, known as the Water-Poet, was one of the characters of Elizabethan and Jacobean London. On 25 July 1622 he undertook an impressive publicity stunt, attempting to row down the Thames from London to the Isle of Sheppey in Kent, a distance of forty miles, in a boat made of paper. For oars he used two fish tied to canes. Not surprisingly he ran into problems, but claimed to have  completed the journey. His poem about the adventure appeared in one of his published collections. Here is an extract, after he set off with a friend in the flimsy vessel:
The water to the paper being got,
In one half hour our boat began to rot.
In which extremity I thought it fit
To put in use a stratagem of wit,
which was, eight bullocks bladders we had bought
Puffed stiffly full with wind, bound fast and taut,
Which on our boat within the tide we tied
One each side four upon the outward side.
The water still rose higher by degrees,
In three miles going, almost to our knees.
Our rotten bottom all to tatters fell,
And left our boat as bottomless as hell.

According to Taylor, they somehow stayed afloat all night:
Thus three hours darkeling did I puzzle and toil
Soused and well pickled, chafe and muzzle and moil,
Drench’d with the swassing waves and stewed in sweat
Scarce able with a cane our boat to set.

It was clearly a tall tale, but the stunt gave him plenty of publicity and helped to increase the sales he was able to make from selling copies of his poem. 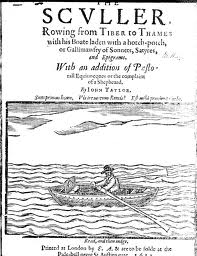 John Taylor had been born in Gloucester in 1578 and in his teens became a Thames waterman, the equivalent of a modern taxi driver. He fought at sea against the Spaniards and rose to become the organiser of pageants for special occasions. He also fancied himself as a poet, his poem The Sculler being one of his earliest published works. It forms part of the British Library’s current exhibition Writing Britain.

By 1630 he was able to publish a magnificent collection of his works, over 150 poems. None of the poems are very good, but they are studied for what they reveal of the life and times of people in the early modern period. He was well-enough known to be able to draw attention to pet subjects: he gained the support of King Charles 1 when he campaigned against the pollution and hindrances to navigation of some of England’s rivers. This blogpost explains some of Taylor’s stunts.

With his links to the theatre (watermen ferried people to the playhouses on the south bank of the Thames from the city on the north), and his interest in poetry, it’s impossible that he didn’t know Shakespeare, and it was John Taylor who wrote one of the earliest references to Shakespeare’s death. He compiled a list of poets whose work and name had survived because their poems were printed. It appears in the poem In Praise of Hemp-seed, published in 1620, which contains the following lines:
In paper, many a poet now survives
Or else their lines had perish’d with their lives.
Old Chaucer, Gower, and Sir Thomas More,
Sir Philip Sidney, who the laurel wore,
Spenser, and Shakespeare did in art excell,
Sir Edward Dyer, Greene, Nash, Daniell.
Sylvester, Beaumont, Sir John Harrington,
Forgetfulness their works would over run
But that in paper they immortally
Do live in spite of death, and cannot lie.

John Taylor’s immortality was ensured by making use of the power of the printing press. In fact, as far as we know, Taylor was much more concerned to keep his name alive for all time than Shakespeare ever was.