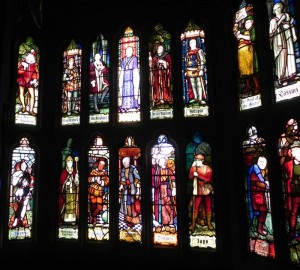 One of the most significant events in the early years of the theatre in Stratford was the appointment of Frank Benson to run the festivals. From 1879 to 1885 the Memorial Theatre had been a receiving house for companies bringing their own productions to Stratford for a couple of weeks. Charles Edward Flower, the founder of the theatre, knew that in order to escape the fate of the forgotten Royal Shakespearian Theatre, demolished in 1872, the theatre had to introduce a sense of continuity and community.

Frank Benson had founded his acting Company in 1883. His immediate inspiration was the German Saxe-Meiningen Company, but he was also following in the footsteps of Shakespeare himself. He led the festivals in Stratford-upon-Avon almost continuously from 1886 to the First World War. Henry V’s famous line “We few, we happy few, we band of brothers” became the Bensonians’ motto.

The Theatre’s collections include a painted portrait and a bronze head of Benson, but it’s the stained glass windows on the first floor of the original Shakespeare Memorial Theatre that really associate the Benson Company with the building. 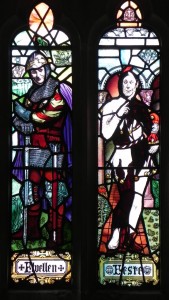 Old Bensonians marked the company’s connection to the Memorial Theatre by presenting glass panels of members of the company who had passed away to the window at the end of the Picture Gallery (now the Swan Room). Some had been with the Company for over twenty years. On May Day 1905 four portraits were installed along with a window bearing Shakespeare’s coat of arms and the phrase from Henry V. Two of these, George Hippisley and Alfred Ferrand, had died in the Boer War. Each portrait showed the actor in one of the parts for which they were best remembered (as the Bensons were a touring company these parts had not always been performed in Stratford). At the ceremony Benson’s aim, to “train a company, every member of which would be an essential part of one homogenous whole, consecrated to the practice of the dramatic arts and especially to the representation of the plays of Shakespeare”, was quoted.

Later in 1905 two more windows were unveiled and four more followed over the next few years. The final seven were added in 1925, unveiled by Henry Ainley, one of Benson’s leading actors. At the same time, a window in memory of Bensonians who lost their lives in the First World War was dedicated by Dame Ellen Terry, the greatest actress of her time. Overlooking the staircase, it shows St George killing the dragon. St George is a portrait of Frank Benson’s son Eric who was killed in the war.

In 1932, when the new Theatre was opened, twelve new portraits were inaugurated in the two windows to the left of the main oriel window, and dedicated by Sir Frank Benson himself. 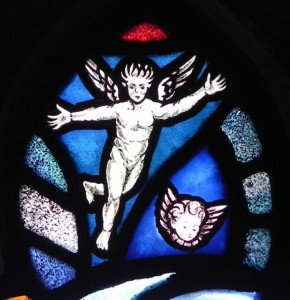 Detail of Ariel from the Prospero window

After Benson’s death in 1939 it was inevitable that his portrait would complete the window to show him amidst his fellow players. On 23 April 1950 the central panel bearing Shakespeare’s coat of arms and the quotation was replaced with Sir Frank Benson as Richard II. The unveiling was carried out by “Old Bensonians” Dorothy Green and Baliol Holloway in the presence of many actors including Dame Sybil Thorndike, Sir Lewis Casson, John Gielgud and Anthony Quayle.

The glass panel showing Shakespeare’s coat of arms is now above the bar on the ground floor.

The windows are beautifully made and include some lovely details, but you’ll need to visit during daylight to see them. If you’d like to examine them here’s a complete list.

6 Responses to Stratford’s Band of Brothers: the Bensonian Company