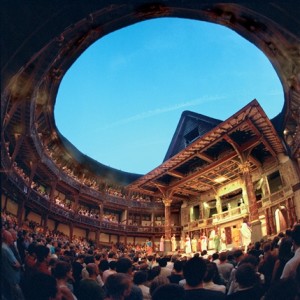 On 21 September 1599 a Swiss tourist, Thomas Platter, visiting London, went to the newly-opened Globe Theatre to see a play. As it happened, he saw Shakespeare’s Julius Caesar. The occasion made quite an impression on him, so much so that he wrote a long description. This is a translation.
On September 21st after lunch, about two o’clock, I and my party crossed the water, and there in the house with the thatched roof witnessed an excellent performance of the tragedy of the first Emperor Julius Caesar, with a cast of some fifteen people; when the play was over they danced very marvellously and gracefully together as is their wont, two dressed as men and two as women…

Thus daily at two in the afternoon, London has sometimes three plays running in different places, competing with each other, and those which play best obtain most spectators.

The playhouses are so constructed that they play on a raised platform, so that everyone has a good view. There are different galleries and places, however, where the seating is better and more comfortable and therefore more expensive. For whoever cares to stand below only pays one English penny, but if he wishes to sit he enters by another door, and pays another penny, while if he desires to sit in the most comfortable seats which are cushioned, where he not only sees everything well, but can also be seen, then he pays yet another English penny at another door. And during the performance food and drink are carried round the audience, so that for what one cares to pay one may also have refreshment.

The actors are most expensively costumed for it is the English usage for eminent Lords or Knights at their decease to bequeath and leave almost the best of their clothes to their serving men, which it is unseemly for the latter to wear, so that they offer them for sale for a small sum of money to the actors.

This is one of only a handful of accounts of what it was like to attend the theatre. From it theatre historians have drawn many conclusions about playhouses in Elizabethan England, and about the experience of the audience. It’s something of a miracle that this information has survived, but it began with Thomas Platter taking the trouble to write down his memories of the experience.

I’m interested in recording members of the audience to build up an archive about the modern experience of seeing Shakespeare in the theatre. This project is only in the planning stages at the moment, and you can find more information the RSC’s MyShakespeare blog, and on the Listening to the Audience page. If you’d like to be kept up to date with news about the project, just leave a comment on the Listening to the Audience page.