We all know that in order to get to grips with Shakespeare’s writing, you have to understand blank verse, most crucially the unrhymed iambic pentameter. Students often struggle with the theory, though in practice it’s not so tough: one of the reasons why blank verse is so easy to listen to is that it its heartbeat rhythm is also used in everyday speech.

The same can’t be said of the rhyming couplet. Recently Patrick Spottiswoode, Director of Education at Shakespeare’s Globe in London, came to speak to Stratford-upon-Avon’s Shakespeare Club on the subject of rhyme. I have to confess I’ve always thought of rhymed lines as rather inferior, not least because, being used to close scenes, they always seem artificial.

How wrong I was! In order to write this lecture Patrick Spottiswoode has totted up how many rhyming couplets there are in Shakespeare, and while I’m not going to give the number away, suffice it to say there are far more than I had realised, and in his lecture he explained how subtly Shakespeare uses them.

To begin with, he looked at the history of plays before Shakespeare, when at one time all plays were written in rhyme. Reading the plays in chronological order the jangling couplets made difficult reading, and Patrick explained his relief when he got to plays that moved away from them. The first blank verse play was Gorboduc, a tragic drama dating from 1561, and Supposes, a comedy, was written in prose.  By the time Shakespeare came along, writers like Marlowe had made blank verse plays the norm, though rhyme was certainly not dead. Poet Samuel Daniel said rhyme “gives the poet wings”.

Throughout his career Shakespeare experimented with poetic forms, and he does this with rhyme as much as he does with blank verse.

I’d never noticed, for instance, how much the use of rhyme varies according to character. In The Two Gentlemen of Verona the womanising Proteus speaks in rhyme, the virtuous (and rather dull) Valentine in blank verse. In Richard II, Bolingbroke only begins to use rhyme after he’s become king, using it most consistently in his final conciliatory speech. And in Twelfth Night, Olivia speaks in prose until Viola appears on the scene: the rhymes increase as she falls more desperately in love.

Patrick identified leaving and loving as the main situations where Shakespeare uses rhyme.  Leaving rhymes don’t just give an exit to the end of a scene, as in Hamlet’s
The time is out of joint, O cursed spite
That ever I was born to set it right!

but are used for the death of characters like Brutus in Julius Caesar.

In Othello, Iago’s attempts to influence Othello against Desdemona are in poetry, and rhymed couplets punctuate the progress of the argument. He pretends to be hurt that Othello challenges his motives:
I thank you for this profit, and from hence
I’ll love no friend, since love breeds such offence.

And as the plot comes to fruition he uses a rhymed aside to the audience to make them complicit.
Will you go on, I pray? This is the night
That either makes me, or fordoes me quite. 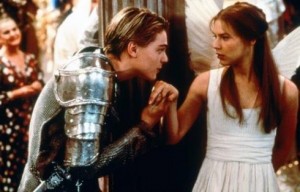 But rhyme is most associated with love. Rhymes, “verses of feigning love” are just one of the “cunning” means which A Midsummer Night’s Dream‘s Lysander has used to “filch” Hermia’s heart from her father. And Shakespeare revels in playing with poetry, Romeo and Juliet probably containing the best examples of using the rhymed couplet differently according to character and situation. Patrick described Lady Capulet’s couplets as “starchy”, and when speaking to Juliet about acceptingParis as a suitor her speech is certainly formal for a mother talking to her daughter:
This precious book of love, this unbound lover,
To beautify him only lacks a cover.

On first seeing Juliet, Romeo starts speaking in much more compelling rhyming couplets:
Did my heart love till now? Foreswear it, sight.
For I ne’er saw true beauty till this night.

When they meet, their first speeches together create a sonnet in which they share the final rhymed couplet before they kiss.
Juliet: Saints do not move, though grant for prayer’s sake.
Romeo: Then move not, while my prayer’s effect I take.

The balcony scene, which Patrick  called “a perfect marriage of form and feeling”, is almost 200 lines of mostly blank verse that includes some of Shakespeare’s most memorable rhyming couplets.
Good night, good night. Parting is such sweet sorrow
That I shall say good night till it be morrow.

If you get the opportunity to hear Patrick Spottiswoode speaking on this (or any other subject), take it. He’s a hugely entertaining speaker with a wealth of knowledge about Shakespeare and his plays. The Shakespeare Club’s next lecture will be on 13 November when Professor Stuart Hampton-Reeves will be assessing the rebel Jack Cade, alternately viewed as political hero or sadistic monster.