Measure for Measure, Pericles and Leveson

David Troughton as the Duke in Measure for Measure, 2004, a collaboration between the National Theatre and Complicite

O place and greatness … millions of false eyes
Are stuck upon thee: volumes of report
Run with these false and most contrarious quests
Upon thy doings: thousand escapes of wit
Make thee the father of their idle dream,
And rack thee in their fancies.

This speech, spoken by the Duke in Measure for Measure, fills a kind of onstage gap, covering the moments when Isabella persuades Mariana to substitute herself for a liaison with Angelo. He could have chosen to have Mariana agree to the suggestion immediately, but Shakespeare deliberately creates this moment for the Duke to remind the audience of how rumour affects those in the public eye.

The Leveson inquiry, which has just published its report, has looked at the freedom of our own press when considering the lives of celebrities, of ordinary people who become victims, and at those who are suspected of criminal activity. All can be damaged by the press’s attention.

This moment in Measure for Measure is a dodgy and questionable one. Those who are spreading the rumours may be acting wrongly, but what about those who pretend to be what they are not, even for the best of motives? The Duke has left his post, returning disguised as a friar in order to spy on the man he has left in charge. Isabella helps to set up the bed-trick even though by doing so she condones behaviour of which she previously disapproved. Does the end justify the means? Measure for Measure questions the morality and motives of everyone in the play, and nobody is without guilt.

The Provost (Angus Wright), Isabella (Naomi Frederick) and Angelo (Paul Rhys) in the 2004 collaboration between the National Theatre and Complicite

The Leveson inquiry is just one of a series of disturbing stories coming to light on the subjects of sexual exploitation, privacy, and the potential for corruption between the press, police and politicians. Measure for Measure is concerned with many of the same issues, where the rumour-monger Lucio performs the role of the press and the gaol authorities represent the police.

Angelo highlights the moral dilemma, desiring Isabella while also condemning her brother to death:
O, let her brother live:
Thieves for their robbery have authority,
When judges steal themselves.

One of the most unsettling aspects of the Jimmy Savile abuse cases is that he deliberately exploited young, vulnerable girls who he knew would either not dare to speak up, or who would not be believed if they did. When propositioned by Angelo, Isabella threatens to expose him.
I will proclaim thee, Angelo – look for’t!
Sign me a present pardon for my brother,
Or with an outstretched throat I’ll tell the world aloud
What man thou art.

In the most chilling moment of the play Angelo turns on her:
Who will believe thee, Isabel?
My unsoiled name, th’austereness of my life,
My vouch against you, and my place i’th’state,
Will so your accusation overweigh,
That you shall stifle in your own report.

There’s a section on child prostitution in Duncan Salkeld’s recent book Shakespeare Among the Courtesans. The author could hardly have guessed how relevant it would be. I was reading it when a news item came on the radio about the activities of gangs in the north of England which have been grooming young girls. They too were let down by police and social services, allowing the abuse to go on for years. And in recent days and weeks a whole series of public figures have been questioned about possible child abuse which has been uninvestigated until now. 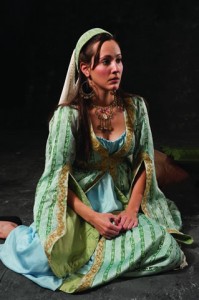 Paedophilia was certainly not unknown to Shakespeare. In Pericles Marina is asked “Were you a gamester at five, or at seven?” Salkeld comments that in this play Shakespeare “uniquely acknowledges the emerging sexual value of children in a world of commodity and capital”. Her virginity, her beauty, even her innocence, make Marina more valuable. That Shakespeare meant the world of Mytilene, like that of Vienna, to be recognisable to the citizens of London, is not in doubt in the face of the evidence in the form of court records examined in Salkeld’s book. Marina’s escape from the brothel leaves many other young girls still within, and the governor of the city is a regular client of that same brothel until converted by her.

Salkeld concludes that “the play may hold her up as a beacon of chastity but she is in fact a far more disturbing symbol in the history of desire’s demand and supply”. Similarly Isabella may not be the “thing enskied and sainted” that she at first appears, her moral certainties vanishing as the story unfolds and the need for deception increases.

4 Responses to Measure for Measure, Pericles and Leveson