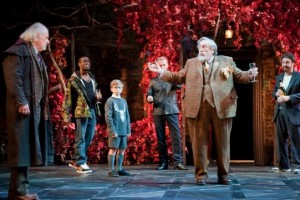 The RSC’s current production of The Merry Wives of Windsor, featuring Des Barrit as Falstaff

This week I finally caught up with the RSC’s joyful production of The Merry Wives of Windsor. It was the company’s grown-up Christmas extravaganza and if you have the chance, there are still a couple of performances which are guaranteed to bring cheer in the January gloom.

It’s a play which allows women a prominence they can lack elsewhere and here both wives and Mistress Quickly are allowed to let their hair down as they develop the comic potential of their roles.  The RSC has also cast the most skilful of Shakespearean comics, Des Barrit, as Falstaff. His Shakespeare roles have included a wonderfully fruity Malvolio in Twelfth Night, Bottom in A Midsummer Night’s Dream, both Antipholuses in The Comedy of Errors, and Falstaff in Henry IV parts 1 and 2, a very different version of the role from that in The Merry Wives of Windsor. It’s over a decade since he performed for the RSC, though he would have performed in the 2006 musical version of Merry Wives had he not had to withdraw through injury. 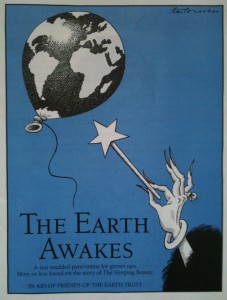 I first saw Des in the one-off panto The Earth Awakes, put on as a fundraiser for the Friends of the Earth Trust in November 1987, which was performed on two occasions, at the Palace Theatre in London and at the RST in Stratford. Although it had an impressive cast and was devised by the extremely talented comedy writer and performer Graeme Garden, the best moment of the evening for me was when Des burst onto the stage as the pantomime dame wheeling a shopping trolley. I don’t remember much about the panto itself, but Des’s was a superbly assured comedy performance that instantly connected with the audience.

Following this appearance he became a member of the RSC for its 1988 season and several times afterwards. He’s one of those actors that can made an audience laugh just by standing still as he did when playing Malvolio in Twelfth Night and, memorably, Trinculo in The Tempest.

His ability to play serious, even threatening roles, including the Porter in Macbeth and the Duke of Gloucester in King Lear demonstrated he was more than a clown and more than capable of handling the complexity of Shakespeare’s language. His path into the profession was unusual: he didn’t go into acting until he was 35 and a professional accountant.

Watching Des in action reminded me of some correspondence I’ve just had with a reader of my blog about the Bensonian window in the RST, one pane of which features Frank Benson’s most successful comic actor George R Weir. The two men worked together for a quarter of a century from the 1880s until Weir’s death in 1909. Described by J C Trewin as a genius, this “plump, unctuous-voiced, merry-eyed man” played not just the great clowning roles like Bottom in A Midsummer Night’s Dream and Dogberry in Much Ado About Nothing, but also roles demanding more depth such as the First Gravedigger in Hamlet, one of the Murderers in Richard III and, like Barrit, the Porter in Macbeth.

Weir was the most-loved of the Bensonians, and J C Trewin in his book Benson and the Bensonians recounts how “at Stratford it was a custom to call for Weir on the last Festival night, though everyone knew he would have to be coaxed into uttering a few shy, not very coherent words in the hubble-bubble voice that, when needed, he could discipline.”  Weir died at the early age of 56, and The Manchester Guardian in its obituary said of him: “He had just that patient intimacy with the unchanging movement of nature which is the spirit behind all the Shakespearean rustics. This helped to make him the very rare artist that he was: a comic artist with a sense of poetry”.

It’s been said that the most difficult parts to play in Shakespeare are the so-called clowns. George Weir and Des Barrit are two actors who have managed to perfect the art of finding both the comedy and the poetry within Shakespeare’s plays.

This entry was posted in Plays and Poems, Shakespeare on Stage, Stratford-upon-Avon and tagged Benson window, clowns, Des Barrit, George R Weir, The Earth Awakes, The Merry Wives of Windsor. Bookmark the permalink.