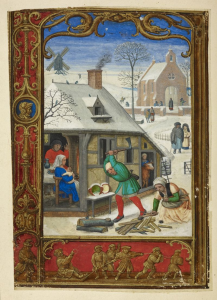 The image is another from the British Library: Calendar page for January, from the Golf Book (Book of Hours, Use of Rome), workshop of Simon Bening, Netherlands(Bruges), c. 1540, Additional MS 24098, f. 18v.  A blog post discussing it is here.

The song of Winter from Love’s Labour’s Lost is one of those places where you feel Shakespeare must be writing about his own experience of life in the country. It’s a bleak picture, but a reassuringly predictable one. We’re now in the last few of the twelve days of Christmas, after which normal working life resumed. Many writers and artists have vividly described activities appropriate to the season: here are a couple of contrasting examples.

In Five Hundred Points of Good Husbandry Thomas Tusser lists jobs on the farm at all times of the year, and although January might seem like a quiet month he has plenty to say about work to be done. “When Christmas is ended, bid feasting adue, goe play the good husband, thy stock to renue” he suggests. Cleaning out the farmyard, taking cuttings of roses and willow, felling and pruning trees, hedging, cleaning out the dovehouse, and keeping an eye on your cattle and sheep, all needed to be done. Preparing the soil for planting crops later in the year was a hard job:
Go breake up land,
get mattock in hand,
Stub roote so tough,
for breaking of plough.

Nicholas Breton’s charming description of January is quoted by Gregory Doran in his Shakespeare Almanac. This is a shortened extract: 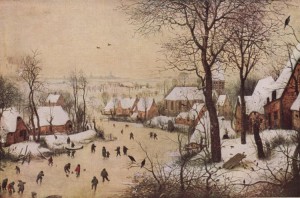 It is now January, and Time begins to turn the wheel of his Revolution, the woods begin to lose the beauty of their spreading boughs, and the proud oak must stoop to the axe: the squirrel now surveyeth the nut and the maple, and the hedgehog rolls himself up like a football: an apple and a nutmeg make a gossips cup: and the ale and the faggot are the victuallers merchandise…. Down beds and quilted caps are now in the pride of their service, and the cook and the pantler are men of no mean office….Fishermen now have a cold trade, and travellers a foul journey: the Cook room now is not the worst place in the ship, and the shepherd hath a bleak seat on the mountain: the blackbird leaveth not a berry on the thorn, and the garden earth is turned up for her roots: the water floods run over the proud banks….To conclude, I hold it a time of little comfort, the rich man’s charge, and the poor man’s misery.

I know there’s still plenty of time for a change, but so far the weather in January 2013 has been kind.