This is the second post I’m writing about the new book, J R Mulryne’s The Guild and Guild Buildings of Shakespeare’s Stratford: Society, Religion, School and Stage, published by Ashgate. The first can be found here.

The fame of this cluster of buildings rests on the fact that from the late 1500s the floor above the Guild Hall housed the town’s school, attended by the sons of local townsmen including William Shakespeare. It’s a sad fact that although many of the business records of the town have survived the names of the pupils have not, but then why would they? The earliest record of the names of the scholars is a list written in 1740 on the back of another piece of paper by the then schoolmaster Joseph Greene, and the official list of enrolled boys dates only from 1810. A full history of the school, Richard Pearson’s King Edward VI School, Stratford-upon-Avon: Shakespeare’s School, was written as recently as 2008.

Two chapters in the book deal specifically with the school. Sylvia Gill writes about the period from 1420 to 1558, looking in detail at William Dalam,the last teacher before the school was refounded under its new Protestant charter in 1553. We are fortunate that a number of agreements were drawn up clarifying the arrangements for the handover to Dalam’s successor William Smart including the terms of Dalam’s retirement at the age of 65. Ian Green by contrast broadens the view in his chapter, discussing the developments in education during the period more generally. He looks at the developments in the grammar school curriculum, the work of the teachers, and the standing of Stratford’s school during the sixteenth century. He concludes that the life of a schoolmaster may not have been a happy one, with up to sixty not very interested boys pupils learning the rudiments of Latin in one classroom. 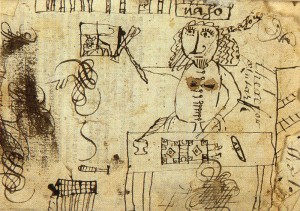 The image, which featured in the British Museum’s Shakespeare exhibition in 2012, is a caricature of a schoolmaster drawn by a seventeenth-century scholar in a copy of Ovid’s Metamorphoses from Eton College Library. We still recognise the portrait of the second of Jaques’ seven ages of man,
the whining school-boy, with his satchel
And shining morning face, creeping like snail
Unwillingly to school.

Though the curriculum focused on learning Latin, the boys read a wide range of material, including rote learning of William Lilly’s official Grammar, set pieces from other books and, for the older students, the humanist literature of Cicero, Terence, Virgil, Horace and Ovid. The Latin lesson in The Merry Wives of Windsor is clearly taken from Lilly’s Grammar, and Shakespeare includes quotations from the book in both Love’s Labour’s Lost and Twelfth Night.

Mulryne describes as “a main impetus towards writing this book” the recent archaeological and documentary research on the Guild buildings, summarised in the chapter by Kate Giles and Jonathan Clark. This has provided some new interpretations of the lower Guild Hall’s wall paintings and on the chapel, but tree-ring analysis has also led to a reassessment of the building traditionally known as the Pedagogues House tucked away from public view in the courtyard behind the Guild Hall. This building has always been assumed to be that which documentary sources from 1427 described as the “Scolehowus”. The results of the dendrochronological survey  suggest, though, that the trees used to build the Pedagogue’s house were felled in 1502. This raises two questions: where was the 1427 Schoolhouse, and what was the Pedagogue’s House’s original function? The answer to the second question will only be confirmed by further research, but it seems possible that it was intended as a hall and parlour for the almshouses. 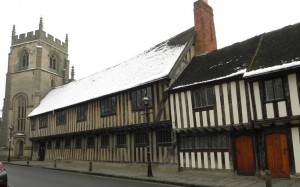 The Guild buildings, the Chapel on the left, then the Guild Hall and on the right the “infill house”

For the first question, about the early Schoolhouse, a “tentative proposal” has been made that this could in fact be the irregular-sized almshouse that stands adjacent to the Guild Hall, known as the “infill house”, and the suggestion seems to be supported by tree-ring analysis of its timbers. If this is true, the schoolroom would have been on the ground floor off Church Street with the master’s chamber above, and this information will add considerably to the interest of the buildings for those looking at them from the street. In the 1560s only a few years before Shakespeare became a pupil the school would have moved from this small space into the much larger room over the Guild Hall.