Speaking of comfort: theatre, Shakespeare and the audience experience

When you go to the theatre, do you have your favourite seat? Many of us have a preference, to sit upstairs, or to be down near the stage, at any rate. Back in Shakespeare’s theatres you would have been able to decide where you wanted to sit or stand, paying according to how comfortable your place was.

A few weeks ago I found myself sitting in a seat in the Royal Shakespeare Theatre dedicated to the actor Patrick Stewart. The naming of theatre seats, either in memory of someone else, or in your own name, was encouraged as part of the “Take your seat appeal”, by which it was possible to name a seat in the transformed theatre in exchange for a donation of between £1200 and £5000. Over 600 such names are listed in the 2010 Welcome booklet.

Raising funds by naming a seat in the theatre has quite a long history in Stratford. Back in 1932 those who had subscribed the substantial sum of £1000 towards the building of the theatre were invited to choose the name of a famous actor or theatrical personality whose name would be inscribed on a plate attached to a seat. Names chosen included Ellen Terry and Henry Irving, the American actress Ada Rehan, David Garrick, the African Roscius Ira Aldridge, Richard Burbage and even Katherine Hepburn.

This idea was revived in 1975 as part of the Centenary appeal in order to help raise funds for the theatre’s air conditioning plant. Donors were asked to pay a minimum of £500, and the practice of sponsoring plaques continued into the 1990s. Some of the people remembered in this way include Vivien Leigh, Alec Guinness, Dorothy Tutin, Director Michel St Denis, Judi Dench and the theatre’s manager for over 30 years, David Brierley. 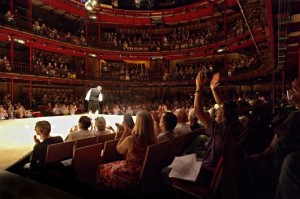 Audience at the Courtyard Theatre

When the theatre closed in 2007 for redevelopment the plaques were saved and re-attached to seats in the new theatre. The new list includes a more international group, people from Australia and Japan, ordinary theatregoers wanting to celebrate their enjoyment like John and Judith Theakston “The play’s the thing”, one couple wanting to commemorate favourite actors of their youth Alan Badel and Fabia Drake, and many in memory of people who loved Shakespeare in the theatre.

Sponsoring a seat sadly doesn’t give you the right to sit in it, but at least when you go to the theatre these days you can usually expect an upholstered seat (unless you go to the Donmar’s current Julius Caesar where sitting on a grey moulded plastic chair is part of the immersive experience, and actually not uncomfortable). Online booking has meant we can often choose our own seats, but apart from sites like the National Theatre’s where you can see photographs taken from different seats, you don’t really know what to expect. When writing the history of the theatre, the audience’s experience doesn’t usually feature very heavily, and this piece from the V&A explains how audience expectations have changed over the centuries.

Of course the play is the thing, but we all know how different it can seem when seen from a really good seat as opposed to from behind a pillar, right at the back, with no leg-room or facing a vertigo-inducing drop. Reviewers, and the creative team, tend to see the play from some of the best seats. 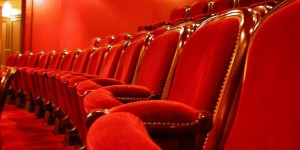 Last year Lyn Gardner wrote a piece  complaining about ticket prices: the average West End theatre ticket in 2011 cost £46.40 and top price tickets in 2012 often reached £70. Now Tim Sullivan has decided it’s about time audiences had the opportunity to check out individual seats in theatres, and to write their own review of them. His new website, http://www.seatplan.com is asking people to leave their own reviews on the site, rating how comfortable a seat was, whether there was enough leg room, and what the view of the stage was like. He’s aiming to map and rate every one of the 50,000 seats in West End Theatres. In order to encourage use of the site if you add your review to the site before the end of January your name will go into a draw for a pair of tickets to the final performance of Twelfth Night (starring Stephen Fry and Mark Rylance) at The Apollo Theatre on 9 February. The production has received rave reviews and the tickets are a great prize.

And as Tim says: with the launch of Seatplan you need never get a bum seat again!

One Response to Speaking of comfort: theatre, Shakespeare and the audience experience