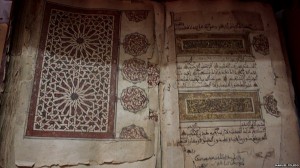 One of the manuscripts from Timbuktu

At last a news item in which Librarians are the heroes of the day, and in the same week as National Libraries Day too!

The city of Timbuktu in Mali is of significance for the whole continent of Africa. Official histories have implied that Africa had few written languages, but in fact tens of thousands of precious manuscripts have traditionally been kept in this centre of learning. Unofficial collections of documents have been kept in the city for centuries, but official manuscript libraries were first founded in 1973 when the Ahmed Baba Institute opened. In the forty years since, twenty-one libraries have been founded.

When the city was invaded by rebels last April the Librarians did what they have traditionally done when disaster strikes. They hid the manuscripts. They’ve had emergency plans, though they wouldn’t have called them that,  for centuries, and have needed to put them into effect several times in the last 500 years. This time the librarians worked at night, packing the thousands of manuscripts into more than 1000 boxes, then sending them to secret locations.

The manuscripts that have been saved are handwritten texts in Arabic and African languages in Arabic script produced between the 13th and the 20th centuries, original manuscripts that are significant resources for the study of Africa’s history and culture. 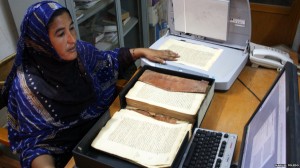 Their value has been recognised for some decades and digitisation programmes have been in operation, capturing images of the manuscripts in a collaborative project being organised from the University of Cape Town, South Africa. It’s an irony that it has taken this potential disaster to draw wider attention to this extraordinary but little-known resource.

It’s rare for Librarians to be seen in such a positive light, but the instincts and priorities of the librarians of Timbuktu are exactly the same as any Special Collections Librarian or Archivist, where preserving the original items comes first. Digitisation is a tremendous tool, reducing the need to handle the original while also enabling the item to be seen more widely, but no digitised image can take the place of the real thing.

Dgitisation projects have flourished throughout the world. The Europeana project which closed last year put online 20 million items illustrating Europe’s rich cultural heritage, though only a fraction of the possible total have still been digitised.

The database brings together items from a large number of European collections and is a wonderful resource. A search for Shakespeare currently yields 12,000 or so results.

The job of librarian has always included helping users to find research materials, whether this has been in reference books, old-fashioned catalogues, or more recently resources such as the plethora of online databases. One of the conclusions I came to when I spoke at the Shakespeare Association of America conference last year was that the time might be right for the creation of an online platform to bring together the fragmented resources relating to Shakespeare in performance. 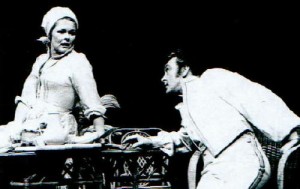 Judi Dench and Donald Sinden in the RSC’s Much Ado About Nothing, 1976

Even where there are official archives for companies like the Royal Shakespeare Company and the National Theatre keeping key items like the prompt book and production photographs, records of productions are still scattered. In the past, costume designs remained the property of the designer who may have given or sold them to the actors involved. The British Library may have a sound recording of the production, while actors and directors may donate their personal collections of scripts to major theatre collections such as the V&A Theatre Collection or the University of Bristol  Theatre Collection, and individual members of the audience may own signed programmes and notebooks containing their impressions.

There is more good news for National Libraries Day though: solutions to the problem are now being worked on. The University of Birmingham’s Shakespeare Institute and Institute of Textual Scholarship and Electronic Editing are  developing a platform to bring virtual material from multiple resources together in a structured way. Presently called the Virtual Shakespeare Theatre Archive this will enable the searcher to begin with the text of a Shakespeare play, linking different kinds of material to a point in the text. It will be possible for material to be uploaded by individuals, widening the scope of resources available and allowing currently unknown personal material to be found. And, importantly, the resource will be available for anyone wishing to use it. The Institute’s Shakespeare Librarian, Karin Brown, who has 15 years of experience working with Shakespeare collections, is driving this forward.

This project is another way in which Librarians are bringing resources together to benefit both researchers and the general public and I look forward to seeing how it develops.

PS Your Library needs you! Show your support today by paying a visit and taking out a book or two.