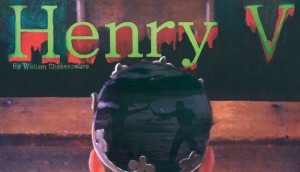 This past weekend an extraordinary series of performances of Henry V has been staged in Stratford-upon-Avon, for once almost unrelated to the RSC or the SBT, the leading Shakespeare organisations in the town, but all to do with Shakespeare’s school, King Edward VI.

For several years a unique group of players made up of pupils at the school, Edward’s Boys, has been putting on performances of little-known plays of the period, in particular those plays that were performed by boy companies in Shakespeare’s time. But that’s only part of the story. On Sunday evening Shakespeare’s play Henry V was performed in the same space that another production of the play was staged, by boys from the school, exactly a century ago. What is now the Swan Theatre was in 1913 the Shakespeare Memorial Theatre. As well as celebrating this centenary, this production is also in memory of those boys.

The following description explains more:
In 1913 the boys from ‘Shakespeare’s School’ – King Edward VI, Stratford-upon-Avon, were invited to perform Shakespeare’s Henry V as part of a season of history plays at the Memorial Theatre staged by Sir Frank Benson. Original music for the production was composed by the then little-known Ralph Vaughan Williams. The schoolboys brought to life the battlefields of France both on-stage and in a special performance filmed in the school courtyard – the earliest filmed amateur production of Shakespeare on record.

Shortly afterwards, all the boys taking part in the production were in France fighting for real on the Western Front of the First World War; seven were killed.

One hundred years later an all-boy company from the school, “Edward’s boys” celebrate the centenary of the Benson production, and the memory of its young heroes, by performing Henry V at the RSC Swan Theatre on Sunday 17 March 2013. The music for the new production will be an edited and partially reconstructed version of the original Vaughan Williams score, recently rediscovered, and to be performed for the first time since the original production 100 years ago.

In the original 1913 production the role of the Chorus was taken by a professional actor, and we are delighted that Tim Pigott-Smith, distinguished actor and an Old Boy of the school, has agreed to take the part in our production.

BBC Midlands Today have broadcast a piece about this production which includes clips from rehearsals and interviews with the Director, Perry Mills and the School’s Archivist, Richard Pearson as well as Tim Pigott-Smith.

And Perry Mills, in the production blog, explains another connection between the past and the present:
In the school’s Memorial Library (built in 1923) there is a bronze plaque with the names of the Old Boys and Masters of the school who gave their lives in the First and Second World Wars. There is also a stained-glass window which commemorates two brothers who died in the earlier conflict, the Jennings Window. Both lads were in the cast of Henry V and so the window features an image of Shakespeare’s king and a quotation from Act 4 (“O God of battles, steel my soldiers’ hearts.”) 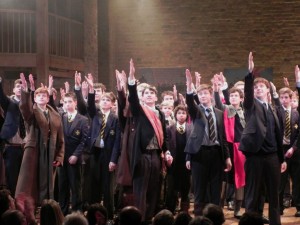 The action of the play could not be more apt, and made for a richly-layered evening. In the production Tim Pigott-Smith plays the chorus as a teacher at the school, looking back at the boys he has taught, many of whom went to war. At the end of the play, in a ceremony reminiscent of Shakespeare’s birthday celebrations in Stratford, the boys line up to place posies of spring flowers on the coffin of Henry V. As the lights dim, the explosions of the battles of World War 1 are heard as Smith, surrounded by exercise books as he sits at the teacher’s desk in Big School, weeps.

KES is a school especially aware of its past: the schoolroom in which Shakespeare was taught still exists, and continues to be used for teaching today. The production skillfully connects today’s schoolboys, some of whom appear in their school uniforms, with modern soldiers and with the historical characters of the play. The youth of some of the boys on stage is a reminder of the harshness of the war in which the boys of 1913 went on to fight, some to die. As so often, Shakespeare memorialises the past while simultaneously helping us make sense of the present.

I’d like to thank all those involved in the creation of this very special production: for those of you not able to see it, the performance was recorded and I understand a TV documentary on the subject is planned. Further information is certain to be posted on the website

One Response to Henry V, Edwards’ Boys and World War 1