One of the sessions I most enjoyed at the Birmingham REP 100 celebration weekend was Gwendolen Whitaker’s lecture on the Rep’s archives and the stories which they are telling. With my own background in the Royal Shakespeare Company’s archives I’m aware of their potential, though performance archives have often been seen as the Cinderellas of the archive world, probably because entertainment isn’t perceived as a serious part of people’s lives. It’s a false perception: as well as creative people like writers and artists, theatres employ armies of skilled workers to build sets, make costumes and make the theatre run. And audiences only continue to attend theatres because plays, and the live experience, touch them in ways that other kinds of entertainment do not.

Theatre is one of the UK’s greatest success stories, and that of Birmingham Rep is one of the most compelling. The theatre has long had a reputation for innovation and for promoting the work of visual artists. 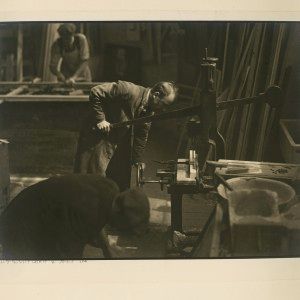 The workshops at the Old Rep

The REP 100 project seeks to celebrate the history of the Rep by opening up its archives, and involves archivists, curators, scanners and conservators. Thousands of items have been digitised and oral history interviews with people who worked for the Rep or who have been audience members are creating new archive material that helps to bring the other items to life.

Part of my interest in the project stemmed from my own decision taken about a year ago to try to fill in some of the gaps in the theatre history of Stratford-upon-Avon by creating an archive of sound recordings to include the memories of people who have worked with Shakespeare in Stratford or who have vivid memories of Shakespeare in performance. So often the only voices that are heard are those of professional journalists and academics. My last post included clips of a few of these recordings.

Gwendolen is curating the exhibition element of the REP 100 project, and I was delighted to see that although her talk was illustrated by images from the archives it also included sound clips from these interviews, and readings by live actors of the contents of some of the letters in the archives. 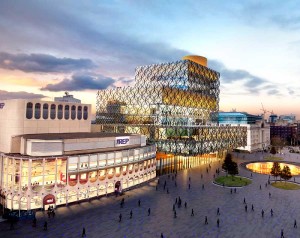 Artist’s impression of the Birmingham Rep and Library of Birmingham

The form taken by her talk, and the project itself, is appropriate and timely because the new Library of Birmingham, to be opened in September, will be physically connected to the current Repertory Theatre. Its striking Shakespeare Library room is being re-installed on the top of the building and the Rep archives, which have been kept in the Central Library for many years will now be much more accessible than they have been before, strengthening the link between these two major cultural centres.

To bring material together, four themes have been identified: The Detail’s in the Design, on theatre designs, Drama Queens focusing on the role women have played in the history of the Rep, Station Street to Stratford via Malvern, concentrating on the history of the theatre and the inspirational work of Barry Jackson, and Hidden Histories, in which the behind the scenes staff on whom so much depends get to come centre stage. As Claire Cochrane has put it:

All theatre buildings hide secrets. Theatre depends so much on the power of illusion. Huge effort is taken to disguise the means by which the imagined stage world is created. This is usually achieved through the unglamorous work of many more people than are seen in performance. 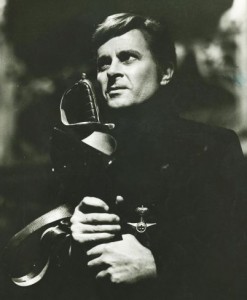 On the new website you can already search for programmes, photographs and oral history recordings. Shakespeare has always been a strong part of the offer at Birmingham Rep. Among the items available are pages of the prompt book from the 1923 Cymbeline, the first ever modern dress production of Shakespeare, photos of Alec McCowen as Hamlet in 1970 and cast lists for Richard III 1949 and Richard II 1955 in which actors on the way up Alan Badel, Richard Pasco, Donald Pleasance, Bernard Hepton, Eric Porter and Jack May all featured.

It will continue to build during the course of the project, and many activities are planned for the next few months which will hopefully open a new chapter for the culture ofEngland’s second city. There is plenty of scope for new creative partnerships to evolve involving both the theatre and the library.

And if you agree that theatre matters, then join the national campaign My Theatre Matters.

This entry was posted in Legacy, Shakespeare on Stage and tagged archives, Birmingham Rep, Library of Birmingham, sound recordings. Bookmark the permalink.