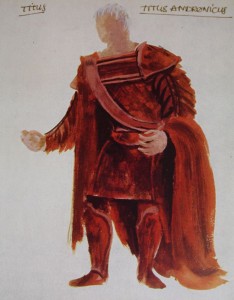 This post was always going to be about Titus Andronicus. But it was going to be about the designs for the 1955 Shakespeare Memorial Theatre production of the play, put on at a time when it was thought to be virtually unplayable, when Peter Brook and designer Desmond Heeley tried to find a solution to the problem of staging the horrors of this savage play.

But as I have prepared it, I have been bombarded by live images coming from Woolwich showing two men, holding bloody knives and machetes, having hacked a soldier to death in broad daylight on a London street. How could anyone thinking about Shakespeare not make the connection between these events and this violent play?

Tonight in Stratford-upon-Avon the RSC stages the press night of its latest production of Titus Andronicus. Members of the cast, crew and audience will, unavoidably have the events of the last day or two in their minds. In Act 1 scene 1, Titus and the Roman army, returning victorious from war, demand a sacrifice. Titus nominates the son of the captured foreign Queen Tamora. She begs for his life:
But must my sons be slaughtered in the streets
For valiant doings in their country’s cause? 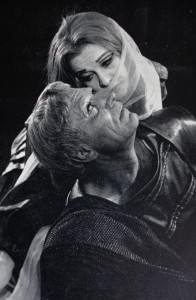 Her plea falls on deaf ears, and it’s this murder, not committed in battle, that leads, via a string of unnatural horrors, to the bloodbath of the final scenes. This must always have been a powerful scene: it is represented on the only contemporary illustration of any scene from Shakespeare’s plays on the Longleat manuscript.

It’s no wonder that the play was seen as a “horror comic”. In his piece for the book Shakespeare Memorial Theatre 1954-1956, the critic Ivor Brown wrote “I must confess that I went to Stratford for this occasion with a sinking feeling. I could not see so crude a collection of atrocities, such an assembly of Tussaud Terrorists, and such a feast of rape and mutilation being rescued from absurdity”.

In his recent Night Waves interview, Brook talked about the tremendous power of the play. He found the solution to staging it not in photographic naturalism but in emotional realism. Olivier’s Titus found the truth of the role: the battered veteran of a hundred campaigns, he showed his audience what Kenneth Tynan described as “the cornered human soul”. 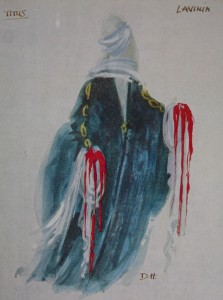 According to Ivor Brown, again, Brook’s method was “to drain off the rivers of gore, never to parade the knife-work, and, instead, to symbolise a wound with a scarlet ribbon”.  Lavinia, Titus’s daughter is the victim of rape and mutilation, whose arms trailed red ribbons, as you can  see in the photographs and in Desmond Heeley’s design.

The production was, against expectation, a triumph. As the savage events of the plot unfold, Titus’s own family is destroyed. Laurence Olivier as Titus “contributed nobly: he turned the part of the broken and bereaved veteran into an unforgettable utterance of despair”.
For now I stand as one upon a rock
Environ’d with a wilderness of sea.

The play quickly descends into a spiral of violence, Tamora  declaring that she will “find a day to massacre them all, /And raze their faction and their family” in revenge for her family’s treatment. In one strange,  hallucinatory scene, Tamora personnifies herself as “Revenge”, she and her two sons, “Rape” and “Murder”, visiting Titus who they suppose to be mad.
I am Revenge sent from th’infernal Kingdom,
To ease the knowing vulture of thy mind,
By working wreakful vengeance on thy foes. 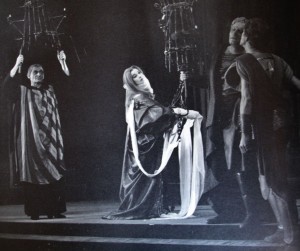 It is at the end of this scene that Titus puts into action the most horrific part of the story. He captures the two sons, kills them and bakes their flesh in a pie which is served to their mother.

Brook’s production toured to Europe in 1957, including Yugoslavia, then under the violent regime of President Tito (who attended one of the performances). The audiences in Belgrade received it rapturously, the play’s horrors mirroring for them events in contemporary Yugoslavia. 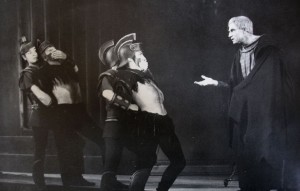 Olivier as Titus “was …the rock that is rent asunder with the dynamite of doom …[it became] a sounding-board of terrible yet authentic passions and of agonies monstrous but not beyond bearing by mankind”.  The Royal Shakespeare Company’s latest production has already been billed as bloody. The sense of recognistion which will be felt by tonight’s audience will undoubtedly, sadly, be felt long into the future.