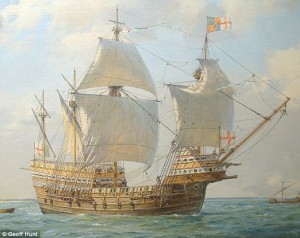 Impression of the Mary Rose

Do you remember what you were doing on 11 October 1982? It’s a day which I remember vividly. There was going to be live coverage on the TV of the raising of the Mary Rose, Henry VIII’s flagship, which had lain in the silt of the Solent since 19 July 1545.

Coverage began at 7am, and it was hoped that the remains would break the surface not too long after 8am. I remember hanging on, anticipating the exciting moment when some timbers would appear, making myself late for work as the work proceeded agonisingly slowly. With no way of catching up during the day, I saw the highlights at tea-time when the images of sodden timbers seemed a bit disappointing, but there was always the hope that one day it would be possible for the ship to be displayed. 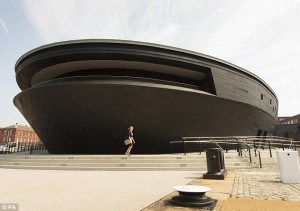 So here we are, more than thirty years later, and the magnificent Mary Rose Museum, costing 35 million pounds, is opening as part of the Portsmouth Historic Dockyard today, 31 May 2013. It’s been a long time coming but the reports of the dramatic black shell-shaped museum indicate that it will have been worth the wait. Follow the links to press reports, including picture galleries and video, here and here. It’s the most amazing achievement, the result of years of patient planning and scrupulous specialised work. The timbers were subjected to years of being sprayed with water, followed by years of being sprayed with water-soluble polymer. They are now being dried, a process that will take another five years as 100 tonnes of water has to be slowly removed. 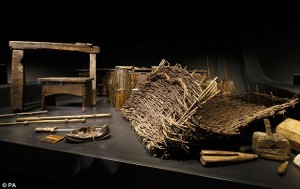 Some of the artefacts on display

In the intervening years many of the artefacts have been examined, conserved and displayed. Weapons, pewter plates and coins were to be expected, but objects like someone’s wooden bowl, a fiddle and bow, and bandages bring a personal dimension to the finds: they weren’t men on a battlefield for the day, but people whose whole lives were concentrated onto the ship. Tiny details are some of the most gripping: many combs were found, some of which still contained the nits which  infested the sailors. There is a beautiful backgammon set,  and as well as the skeletons of the crew, there was a dog. 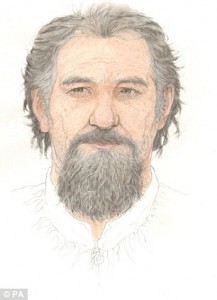 Impression of one of the crew

Attempts have been made to create sketches of some of the crew, based on their skulls, and examination of some of the skeletons has allowed the archaeologists to identify what sort of jobs people did.

The ship was involved in the Battle of the Solent, repelling an attack by the French. It’s thought that she capsized after firing a broadside against a French ship rather than suffering attack. Only 35 of the seamen on board survived, at least 400 men being drowned. Henry VIII himself saw the ship sink from Southsea Castle where he was watching the battle. The suddenness of the sinking, and the fact that it proved impossible to recover most of the objects on board, meant that the ship and all its contents remained relatively intact. It’s been likened to the remains of the town of Pompeii, where a catastrophic event stopped everyday life in its tracks. The ship’s bell, looking astonishingly new, has as part of the opening ceremony been rung for the first time in centuries. 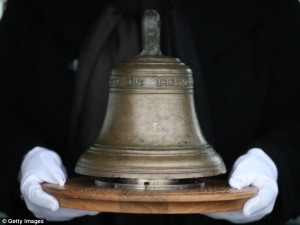 It’s the only 16th century warship on display in the world, but the fact that the Mary Rose capsized illustrates that she had design faults. Later ships were made to be less top-heavy. By the time William Harrison was writing his Description of England, twenty or so years into the reign of Elizabeth, he was able to write “the common report that strangers make of our ships amongst themselves is daily confirmed to be true, which is that for strength, assurance, nimbleness, and swiftness of sailing there are no vessels in the world to be compared with ours”. Queen Elizabeth had spent much time and money building up her navy. He reported at “Her Grace doth yearly build one ship or other to the better defense of her frontiers from the enemy”. And only a few years later came the Spanish Armada that put the fleet to the test. 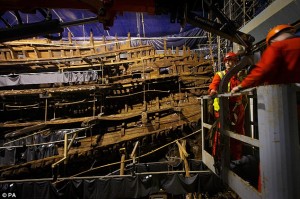 The timbers during preservation

The Mary Rose comes from a period when England was only just beginning to become a maritime power. By the time of Shakespeare’s birth, the ship had already been below the waves for 19 years, and the ships that Shakespeare would have been familiar with would have made it look old-fashioned. It’s been suggested, because Shakespeare shows such familiarity with the parts of contemporary ships, that he might have worked on board ship at some point during his lost years, and we shall probably never know. I’m hugely looking forward to visiting the new Mary Rose Museum, getting up close to one of these magnificent vessels, and seeing how it will help understand the fascination that Tudors, including Shakespeare, felt for their ships.

4 Responses to The Mary Rose Museum: open at last