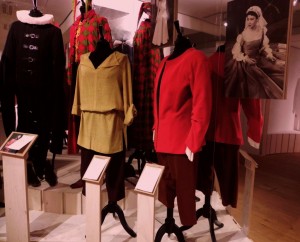 As You LIke It costumes in Into the Wild

Three cheers for the RSC’s latest linked exhibitions, In Stitches, A celebration of RSC Costume. The first, Into the Wild, highlights the twentieth-century Shakespeare costume through thirty-five examples drawn from the RSC Collection, while Costume Craft  illustrates the processes by which modern RSC Costumes and associated items such as wigs are created and maintained.

Looking at the historic costumes, the earliest of which dates from 1952, it’s fascinating to see how much costume design and creation has changed over the years. Modern costumes, designed to be seen closer up, and with improved stage lighting, are much more detailed than those created up to sixty years ago. And the range of fabrics and the techniques that can be used today are extremely sophisticated.

I’ve long been interested in the way that really successful theatre costumes can do part of the work of the actor and director for them. Not only do costumes help the actor to create the character, they can help to suggest the emotion of a scene or explain part of the plot of the play. The role of the costume designer, translating the play into visual terms, is often overlooked, but extremely complex. 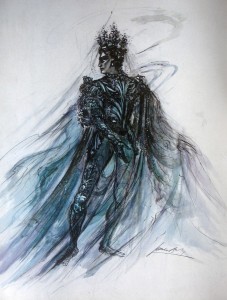 James Bailey’s design for Oberon in A Midsummer Night’s Dream, 1949

It’s easy to imagine how much a costume like James Bailey’s stunning design for the part of Oberon, the fairy king, in A Midsummer Night’s Dream, would have supported the actor who had to inhabit the role. Sadly this is one costume, dating from 1949, that hasn’t survived. Over the next few months I’m going to be writing a series of posts for this blog about some of the costumes featured in Into the Wild as well as looking at some of the designers whose work is represented.

The design process may begin months before the rehearsals start in discussion with the director. The director has the overall responsibility for the production, but the designer will bring their creativity to bear in working on the look of the production. The costume designer also has to collaborate with the costume department who create the costumes as well as the actors who have to wear them. 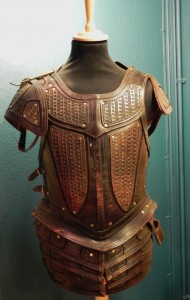 Costume Craft explains the many skills required for the creation of costumes. The RSC is one of the few theatres that makes its own armour, as well as making wigs and hairpieces, and uses a wide variety of techniques including dying and embroidery as well as distressing or breaking down costumes to make them look worn or damaged.

Creating a costume that can be worn onstage, and stand up to the kind of wear that Shakespeare’s plays demand, is a challenge quite different from the work of the maker of clothes for the high street. Shakespeare’s characters fight, climb, dance and sometimes have to change from one costume to another quickly. The costume designs have to be translated into a wearable costume by a team of costume makers. And costumes have to be worn onstage by individuals who are themselves artists, who need to feel happy with what they are wearing. Theatre costumes may also need to be frequently cleaned, and to allow for the concealment of padding, harnesses or blood bags. 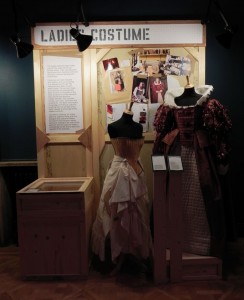 Part of the Costume Craft Exhibition

Theatre costumes send out messages, sometimes direct, sometimes subliminal, which can provide non-verbal clues for members of the audience for Shakespeare’s plays. Both exhibitions are on until September, Into the Wild in the Paccar Room, Costume Craft in the Ferguson Room (above the Swan Bar). Both are free and are well worth a visit if you’re in Stratford-upon-Avon.

This entry was posted in Shakespeare on Stage, Stratford-upon-Avon and tagged costume, Costume Craft, In Stitches, Into the Wild, James Bailey, Royal Shakespeare Company, theatre. Bookmark the permalink.