The Beaumont and Fletcher marathon 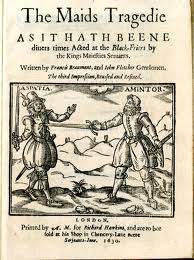 Title page of The Maid’s Tragedy

The students of the Shakespeare Institute in Stratford-upon-Avon are currently undertaking a project which I think is almost certainly unique: to read out loud all the works of the playwrights Francis Beaumont and John Fletcher in what they are calling the Beaumont and Fletcher Marathon. Beginning on 10 June, and ending on 29 June they are reading three plays a day, taking just Sundays off.

This link takes you through to Dr Martin Wiggins’ account of the project, and of the careers of Beaumont and Fletcher themselves.

Dr Wiggins is the author of the multi-volume British Drama 1533-1642: A catalogue, the first two volumes of which are already published. The Marathon reading will be supporting his work on the dating of these plays by field testing his proposed chronological order of the composition of the plays. 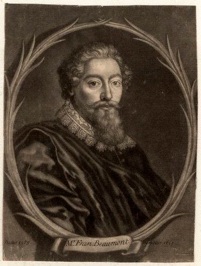 Beaumont and Fletcher are always mentioned in the same breath, but in fact they did not always write together. Beaumont died aged only 32 just weeks before Shakespeare, in 1616, after only a few years of working with Fletcher. Fletcher was a few years older, and as well as collaborating with Beaumont he wrote many plays on his own and in collaboration with a string of other writers including Shakespeare and Massinger. Fletcher died in 1625, aged 46. Their most famous plays include The Knight of the Burning Pestle (which was actually entirely written by Beaumont) and The Maid’s Tragedy. Fletcher worked with Shakespeare on Henry VIII, The Two Noble Kinsmen, and the largely lost play Cardenio. After Shakespeare’s retirement Fletcher became the leading playwright for the King’s Men and following the reopening of the theatres after the restoration of the monarchy in 1660 his plays were among the most performed. 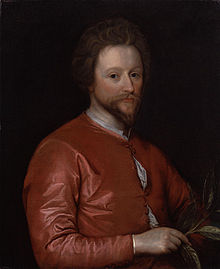 The choice of plays currently being read is a little complicated because of the mysteries surrounding collaborative writing: the first collected edition of the plays was published in 1647, the second in 1679, but because modern academic work has established that some of the plays included in the latter are not the work of either man these are being omitted. Both men had been dead for many years before these publications. A few plays not in either (such as Henry VIII, written collaboratively by Shakespeare and Fletcher), are being read. False attribution is not uncommon later in the seventeenth century: the third Folio of Shakespeare’s plays, published in 1663-4 contains several plays that Shakespeare had no hand in, such as The London Prodigal.

See here for more about the project, including a complete list of the 58 plays and 1 masque plays being read.  Visitors are welcome to attend, and the text is being simultaneously projected so it will be easier to follow. The readings are taking place in support of the Lizz Ketterer Trust. More information about the aims of the Trust, and how to sponsor the readings, is to be found on the site.

Earlier in the week I mentioned the Shakespeare productions listed on the Shakespeare Institute’s Touchstone site. For those interested in plays of the period not by Shakespeare, there is also a listing of Current and Forthcoming Renaissance Drama Productions in the UK. 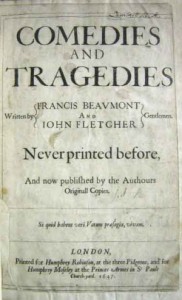 It’s particularly exciting to report that the Shakespeare Institute’s copy of the Beaumont and Fletcher First Folio is on display during this period. This copy was once owned by the writer Anthony Trollope, who noted on the title page that the last play being read, The Fair Maid of the Inn, “is the worst play in the volume”. Will, I wonder, those reading and listening agree after their three week marathon? And will their appreciation of Shakespeare be heightened after their experience?

3 Responses to The Beaumont and Fletcher marathon