Shakespeare and the sweet of the year 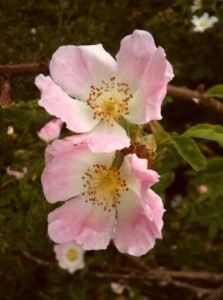 This week the UK is experiencing the warmest weather of the year. Whether it’s because last year was so disappointing, or because spring arrived so late,  summer is bringing with it an explosion of blooms with, it seems to me, an unusual intensity of scent.

In gardens, modern cultivars of plants mentioned by Shakespeare are blooming their hearts out, especially roses, honeysuckles and carnations. No character in Shakespeare personnifies the spirit of summer more than Perdita in The Winter’s Tale dressed as the goddess Flora,  in which
the fairest flowers o’th’season
Are our carnations and streaked gillyvors.

In the sheep-shearing scene Shakespeare raids his memory-bank for plants flowering or used at different seasons: herbs such as savory dried for winter, spring flowers like primroses for the young girls of the village and the summer flowers carnations and pinks.

Our garden roses, beautiful as they are, are mostly rather distantly related to the roses Shakespeare knew and valued for both the beauty of their flowers and their scent. “That which we call a rose by any other word would smell as sweet”, as Juliet has it. Roses were grown in gardens (although the famous scene in which Lancastrians and Yorkists choose red and white roses is an invention), but dog roses, then as now, grow in hedgerows. 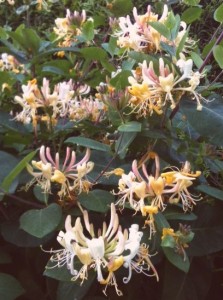 Shakespeare’s familiarity with plants and flowers has often been commented on and Richard Mabey, in his wonderful book Flora Britannica, quotes a number of Shakespeare’s mentions, in particular of honeysuckle. Honeysuckle is a native plant now seen more often in our gardens than in hedgerows, which releases its scent more strongly in the evening. Titania, wooing Bottom in A Midsummer Night’s Dream refers to the plant’s winding habit as well as its intoxicating night-time scent.
Sleep thou, and I will wind thee in my arms…
So doth the woodbine, the sweet honeysuckle,
Gently entwist; the female ivy so
Enrings the barky fingers of the elm.

The plant pictured is growing on a wall just across the road from Holy Trinity Church.

Earlier this week I went for a walk around the north Cotswolds, just a few miles south of Stratford-upon-Avon. As we walked along ancient footpaths bounded by hedgerows I was reminded time and again of plants mentioned by Shakespeare. Blackberry bushes are flowering abundantly just now and I would guess we’re in for a bumper harvest of these delicious fruits which were so common that Shakespeare describes them only as “plentiful”.

Also in the hedgerows were nettles, thistles and docks, dog-roses and elder bushes in full flower. Elder has a reputation for being an unlucky plant, Shakespeare mentioning the legend that Judas hung himself on an elder tree. Cow parsley, a wild plant called kecksies by Shakespeare (still commonly known as keck), has a number of other names including Queen Anne’s Lace, but is now past flowering, as is the beautiful hedgerow bush May.

In Henry V, the Duke of Burgundy likens France to a neglected garden:
her hedges even-pleach’d,
Like prisoners wildly overgrown with hair,
Put forth disorder’d twigs; her fallow leas
The darnel, hemlock and rank fumitory
Doth root upon,…  The even mead, …
Wanting the scythe,…nothing teems
But hateful docks, rough thistles, kecksies, burs,
Losing both beauty and utility.

I didn’t spot any hemlock on our walk, but these impressive, poisonous plants grow alongside the Avon near Stratford.

We walked past banks like Titania’s “where the wild thyme blows”,  covered in flowering buttercups, clover and common spotted orchids. 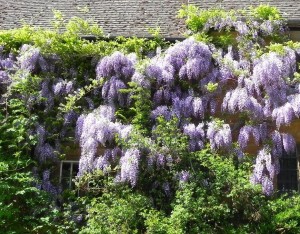 Wisteria growing on a Cotswold wall

Visitors to Stratford can’t help noticing the wisteria that now covers many old buildings, and that flowered profusely a few weeks ago: it always seems sad to me that this gorgeous plant was only imported into England many years after Shakespeare’s lifetime, so he could never have seen and smelled it.  But there’s no doubt that he loved the plants he saw in  summertime in the gardens and countryside.

This entry was posted in Legacy, Shakespeare's World and tagged A Midsummer Night's Dream, flowers, scent, summer, The Winter's Tale. Bookmark the permalink.

One Response to Shakespeare and the sweet of the year