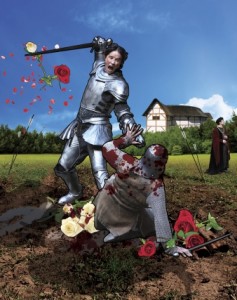 Today is World Listening Day, and although it’s mostly focused on hearing music and the sounds of nature, there is also a link with Shakespeare. Earlier this week a journalist, Rupert Christiansen, wrote a piece in the Telegraph expressing his wish to experience Shakespeare by listening to the poetry rather than watching it. He must have expected it to be controversial:  he raised a series of questions about the audibility of actors and the eccentricity of directorial concepts as well as suggesting that Shakespeare might be performed in concert conditions rather than in full productions.

This article was extensively retweeted and I was fascinated to read the often vitriolic comments of tweeters. Maybe it was because the article appeared in the Telegraph, or because Christiansen mentioned opera, but many tweets suggested that a “concert” performance would be elitist. The implication seemed to be that a theatre performance is democratic, an interesting thought for those who have struggled for years to overcome the popular notion that Shakespeare is only for posh people.

Christiansen’s tone in the article is actually quite apologetic, and I think he has a point. He quotes the poet Stevie Smith watching Romeo and Juliet and finding siding “irrevocably with the verse” made impossible when ” striving so hard to rise above the clash and clamour of inessentials”. She was probably thinking about the fights, or the banquet, but Shakespeare wisely cut the distractions right down when it came to the balcony scene, set at night, between the two leading players.

Shakespeare, particularly in his more mature plays, often gave his actors show-stopping speeches to deliver. He must have relished writing these virtuouso pieces of poetry, which sometimes have little to do with the action of the play. But Shakespeare’s dramatic poetry was still written to be performed, not just read, and it’s best appreciated by being heard.

I remember a performance at the Stratford Poetry Festival in which Richard Pasco, a master of Shakespearean verse speaking, delivered Clarence’s great speech from Richard III. He describes his dream of drowning, and this is just a bit of it:
Methought I saw a thousand fearful wrecks;
Ten thousand men that fishes gnawed upon;
Wedges of gold, great anchors, heaps of pearl,
Inestimable stones, unvalued jewels,
All scattered in the bottom of the sea.
Some lay in dead men’s skulls, and in the holes
Where eyes did once inhabit, there were crept –
As ’twere in scorn of eyes – reflecting gems,
That woo’d the slimy bottom of the deep,
And mocked the dead bones that lay scattered by. 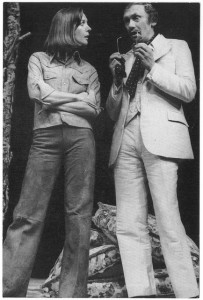 Eileen Atkins as Rosalind and Richard Pasco as Jaques in As You Like It, 1973

The speech isn’t totally irrelevant: Clarence goes on to be drowned, though in a butt of malmsey, not in the sea, but that didn’t stop Shakespeare imagining the scene. It was magical. I’d also seen Pasco performing the role on the same stage, just the year before, but it never had the same impact as it did in the “concert” performance. Incidentally, Richard Pasco’s performance of the Seven Ages of Man speech from As You Like It, another of those arias, provided the young Gregory Doran with the starting point for his obsession with Shakespeare.

As well as poetry readings, I’ve found one-man shows like Ian McKellen’s Acting Shakespeare a great way of hearing the words, and McKellen effectively manages to play more than one role at a time, for instance playing both Falstaff and Hal from Henry IV part 1. 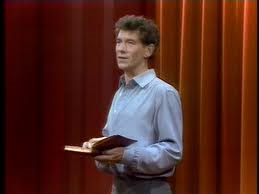 I’ve just found this recording of a performance of this show on Vimeo: made in 1982, it looks very dated and I would guess it’s an early version of the show which he went on to refine, but McKellen’s formidable skills are terrific to observe.

A production that came close to the idea suggested by Christiansen was the 1964 production of Hamlet with Richard Burton, directed by John Gielgud, in New York. With minimal directorial interpretation, and unencumbered by “costumes or flash-harry concepts”, Burton wore plain black clothes and used minimal props on an almost bare stage. Its enormous success, though, was put down more to the high-profile tempestuous relationship between Burton and Elizabeth Taylor rather than the production itself.

The production which sparked off Christiansen’s comments was the current Globe production of the three parts of Henry VI, plays which have been admirably presented by the RSC on a number of occasions.

Director Nick Bagnall has adapted the three plays to run at two hours each in order that they can be presented at some of the actual battlefields where the Wars of the Roses were fought. “A lot of talking in a field doesn’t really work – it needs to be action-packed,” he says. “I’ve got rid of all of the chit-chat and gone straight to the bone. The purists will probably hate me for it, but you can’t please everybody.”

You can, I think, see Christiansen’s point, especially since there are speeches in even these early plays that are worth listening to. So I’m all for the idea of allowing the words their full weight and allowing my “mind’s eye” to imagine the rest. Maybe when a production is being staged the company could do a concert performance, and see how it goes. If anybody wants to have a try, I’d love to be there!