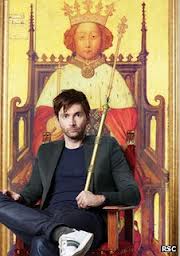 Next week rehearsals begin for the most high-profile event of the RSC’s year, Richard II starring David Tennant, directed by Artistic Director Gregory Doran. There is a lot of information on the RSC’s website including a brief interview with Tennant, but little casting has as yet been made public except for Oliver Ford Davies playing the Duke of York, Nigel Lindsay playing Bolingbrook and Michael Pennington playing John of Gaunt.

The Stratford run is completely sold out but the production will also be running at the Barbican Theatre in London and, best of all for the large numbers who will be able to attend, on 13 November the performance will be broadcast live to cinemas around the world. This will be the first Live from Stratford-upon-Avon broadcast, and John Wyver will be writing a weekly production diary reporting on preparations for this event. His first post on the subject, with many links, is here.

I’m beginning to feel more than a little embarrassed by the number of times I refer to John Wyver’s Illuminations blog, but being so deeply involved with bringing the RSC’s production to cinemas, he just keeps producing great posts. This one looks at earlier screen versions of Richard II. There have been a surprising number, most recently as part of The Hollow Crown series, but one was screened as far as 1950. In his interview David Tennant refers to seeing Derek Jacobi in the role when he was a student, and Jacobi’s Richard was one of the highlights of the BBC Shakespeare series filmed in the 1980s. 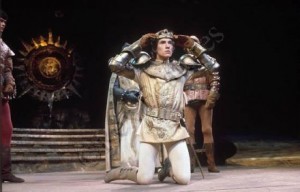 Another production which has become legendary was the double-act which a young Ian McKellen performed in 1969 when he played both Shakespeare’s Richard II and Edward II in Christopher Marlowe’s play for the Prospect Theatre Company. These productions were filmed and televised in 1970. More recently the plays have also been paired by Shakespeare’s Globe. They have much in common: the weak king with his favourites, opposed by nobles, the king’s downfall and murder. Marlowe’s play was written in the early 1590s, several years before Shakespeare’s, and Shakespeare was to write three plays about another weak king, Henry VI, before tackling the story of Richard II. He wrote some of his finest speeches for Richard, giving us memorable stage moments such as this one:
For God’s sake, let us sit upon the ground
And tell sad stories of the death of kings;
How some have been deposed; some slain in war,
Some haunted by the ghosts they have deposed;
Some poison’d by their wives: some sleeping kill’d;
All murder’d: for within the hollow crown
That rounds the mortal temples of a king
Keeps Death his court and there the antic sits,
Scoffing his state and grinning at his pomp,
Allowing him a breath, a little scene,
To monarchize, be fear’d and kill with looks,
Infusing him with self and vain conceit,
As if this flesh which walls about our life,
Were brass impregnable, and humour’d thus
Comes at the last and with a little pin
Bores through his castle wall, and farewell king!
Cover your heads and mock not flesh and blood
With solemn reverence: throw away respect,
Tradition, form and ceremonious duty,
For you have but mistook me all this while:
I live with bread like you, feel want,
Taste grief, need friends: subjected thus,
How can you say to me, I am a king? 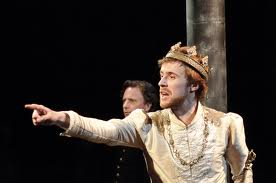 This autumn theatregoers also have the opportunity to see Marlowe’s Edward II at the Olivier Theatre. John Heffernan, who played a notable Richard II at the Tobacco Factory in 2011, is taking his first leading role for the National. On the website it’s  described as “A behind-the-scenes exploration of power, sexual obsession, and a king who treats the realm as his playground. The National offers a contemporary take on Christopher Marlowe’s magnificent, erotic and violent play.” Sounds as if it’s going to be a compelling production: it has its first preview on 28 August and plays into October, and more details are to be found on the website.

5 Responses to Richard II and Edward II take the stage