Reaping the harvest: growing food in Shakespeare’s England and our own 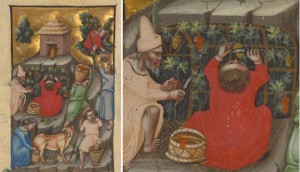 Harvesting grapes, from a medieval manuscript

With the weather on the turn and autumn just around the corner, there’s just time to celebrate the joys of gardening and farming edible plants.

This blog post, A Field Guide to Renaissance Gardens, offers some glorious images of sumptuous medieval gardens of various kinds as depicted in illuminated manuscripts. The blog was written to go along with an exhibition on the subject at the Getty Museum, unfortunately now closed, but we can continue to enjoy some of the images.

Another post in the same series looks at edible gardening in the renaissance, looking specifically at plants grown for food, and gardens designed for produce. The illustrations are gorgeous. 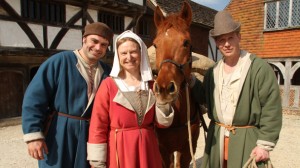 On the subject of the history of producing food, the BBC is soon to screen a new series fronted by specialist in domestic history Ruth Goodman. The series, Tudor Monastery Farm, follows earlier series on farming in the Victorian, Edwardian and Wartime periods. Ruth’s first series back in 2005 was Tales from the Green Valley, a 12-part series first shown in 2005, which focused on life on a small farm in Wales in 1620. This new series goes even further back: to quote the BBC’s advance publicity,

“The team is turning the clock back to the year 1500 – a great turning point in British history. After centuries of war and plague, the nation was enjoying newfound stability and prosperity under the reign of its first Tudor King, Henry VII. But it also marked the last decades of the monastic system that had controlled every aspect of life for centuries.

For almost a 1000 years monasteries dominated the British landscape and were at the heart of the way medieval life was organised. Up to a quarter of the landed wealth in the Kingdom belonged to the Church and much of it was rented to farmers like Peter, Tom and Ruth. ”

Although set before the dissolution, it sounds as though the series will investigate how the ordinary people were involved in the life of the monasteries and how their closing affected ordinary Tudors. The series is based at the Weald and Downland open-air museum in Sussex. 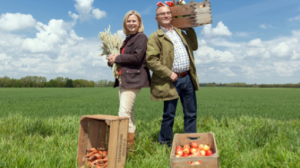 The current TV series Harvest is taking a look at how our food is produced now, focusing in three programmes on vegetables, cereals and fruit. Watching the first programmes it’s impossible not to be impressed by the scale of vegetable growing and to think how much has changed from Shakespeare’s days when it was all done by hand. Massive machines roll across enormous fields, and everything is aimed at selling crops. During the second programme a loaf of bread was made from the wheat that had just been harvested, and consumed in the field where it had grown. The farmer indicated he had never eaten his own wheat before: how different from traditional farming when the family would have used their own produce first of all to feed themselves.

The other notable point from the first programme was how very different the crops grown are from those Shakespeare would have known. Potatoes, orange carrots, tomatoes (grown in vast greenhouses), broccoli, all unrecognisable. The vegetables that Tudors would have known that we still grow, like onions, turnips and cabbages, are all rather unglamorous. But rapeseed, which we think of as a modern import, was grown during the Elizabethan period. The second programme demonstrated how much even those crops that we know to have been grown for centuries, like wheat, have been selectively bred to deliver a larger crop. Modern varieties, though, have the disadvantage of being less able to withstand rough weather than their less refined ancestors.

Finally a reminder of this weekend’s Food Festivals in Stratford-upon-Avon. A free festival takes place in the town centre and the Bancroft Gardens while a paid event at the Racecourse offers free parking and a shuttle bus to take people into the town centre. It’s all explained here. There’s much to look forward to – let’s just keep our fingers crossed, like the farmers hoping to get in their harvests, for some fine weather.

One Response to Reaping the harvest: growing food in Shakespeare’s England and our own