The great feast of language: English language and Shakespeare

Posted on September 3, 2013 by Sylvia Morris 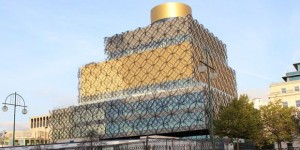 On the morning of 3rd September 2013 the new Library of Birmingham will be declared open. Just 24 hours in advance, it was announced that it will be opened not by a politician or member of the Royal Family but by the 16-year old Malala Yousafzai, who after being shot by the Taliban in her native Pakistan received treatment in Birmingham. Just a few weeks ago she delivered a speech to the United Nations on the importance of education for all children, and  she continues to inspire people of all ages. In a press release about the Library, she  commented:
The content of a book holds the power of education and it is with this power that we can shape our future and change lives. There is no greater weapon than knowledge and no greater source of knowledge than the written word. It is my dream that one day, great buildings like this one will exist in every corner of the world so that every child can grow up with the opportunity to succeed.

It is ironic that although the Library of Birmingham is intended to be seen as a symbol of the regeneration of this city, branch libraries in the city as elsewhere have been forced to close or reduce their hours, seriously affecting the opportunities for children and the less physically able to access libraries, most of which do far more these days than just lend out fiction. 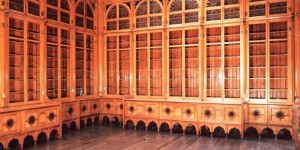 Birmingham has a long history of involvement with Shakespeare, and the Shakespeare Memorial Room, which was part of the Victorian Birmingham Library, has been rebuilt. It’s been likened to a golden fez, positioned at the top of this wedding cake-like building, the largest public library in Europe. Until December a Discovery Season is being held, with lots of events to introduce the Library and the reopened Repertory Theatre to which it is physically attached to the people of Birmingham.

The dominance of the English language, symbolically indicated by the Shakespeare Memorial Room, has been much in the news recently. Last week was the 50th anniversary of one of the most powerful speeches ever made in English, Martin Luther King’s “I have a dream”. For King, as for Malala, equal opportunities for children of all colours, faiths and nationalities was the key to a better future. 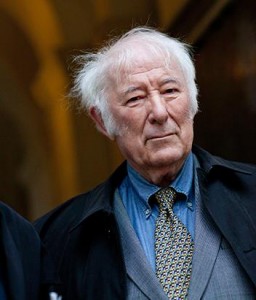 Then over the weekend two men who had used the English language to make their mark on history died: first Seamus Heaney, the Irish poet whose humanity oozed from every line he wrote, and who believed intensely in the importance of poetry. This is a quotation from the speech he made in accepting the Nobel Prize for  Literature:
Poetry can make an order as true to the impact of external reality and as sensitive to the inner laws of the poet’s being as the ripples that rippled in and rippled out across the water in that scullery bucket fifty years ago. An order where we can at
last grow up to that which we stored up as we grew. An order which satisfies all that is appetitive in the intelligence and prehensile in the affections. I credit poetry, in other words, both for being itself and for being a help, for making possible a fluid and restorative relationship between the mind’s centre and its circumference. . . . I credit it because credit is due to it, in our time and in all time, for its truth to life, in every sense of that  phrase.

This link is to an edition of Poetry Please featuring Seamus Heaney reading his own poetry.

Then  renowned  interviewer David Frost, who had first became known through the satirical TV programme That Was the Week That Was, also died.  He might not have been a creator of the English language but he was certainly a skilful user of it.

We are also in the middle of series 6 of  the  radio programme Fry’s English Delight. In it Stephen Fry investigates the English language, and last week’s episode was on the use of rhetoric. The craft of  writing persuasively was used to great effect in Shakespeare’s play Julius Caesar. There’s a clip from the programme here. 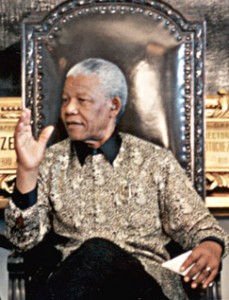 And also this weekend, Nelson Mandela was discharged from hospital.  Aged 95 and in frail health he is still the father of the modern state of South Africa.  The now-famous Robben Island Bible was owned by one of the African National Congress prisoners, imprisoned for their opposition to Apartheid on the infamous Robben Island. This copy of The Complete Works of William Shakespeare was disguised as a religious book and secretly passed around between the inmates, who were encouraged to sign their favourite passages. This was Nelson Mandela’s choice, also from Julius Caesar:
Cowards die many times before their deaths;
The valiant never taste of death but once.
Of all the wonders that I yet have heard.
It seems to me most strange that men should fear;
Seeing that death, a necessary end,
Will come when it will come.
The full story is told here.

For all these people from diverse cultures, English, Shakespeare’s language, remains the language of choice for those wishing either to influence others, or to express truths about human life.