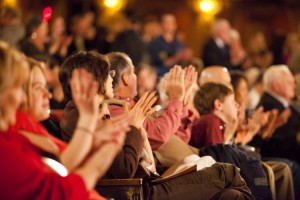 Last week a new report looking at the ways in which the ages and opinions of  theatre audiences are changing was published. State of Play: Theatre UK, was produced by Ticketmaster, who are not surprisingly interested to know who’s buying the tickets. But the statistic that took them by surprise was the growing percentage of under 25-year-olds now attending the theatre. In The Guardian, Alastair Smith, the editor of The Stage, said “There have been an awful lot of initiatives and theatre has tried very hard over the last few years to target younger audiences, and we’re seeing that pay off.” The National Theatre, RSC, Old Vic, Young Vic and other companies have offered young people tickets for as little as £5, and the signs indicate that people may continue to go to the theatre after their 25th birthdays.

More controversially, the report suggests that theatre audiences are changing in their attitudes to acceptable behaviour in the theatre. 13% think it’s acceptable to whisper (80% admit to it), 10% to take a photograph, 17% to eat, and nearly 47% of 16-19 year olds tweet about the show. But before established Shakespeare-lovers get worked up, the most popular shows are musicals which offer more opportunities for what might be seen as anti-social behaviour. The report doesn’t seem to ask about the use of mobile phones (as opposed to checking them), presumably because this is universally recognised as unacceptable.

The Daily Telegraph’s article concludes that the change in behaviour is caused by the widening social and age range of audiences, and seems to be in a bit of a time warp, commenting that “many now go to see West End shows in their daywear”. 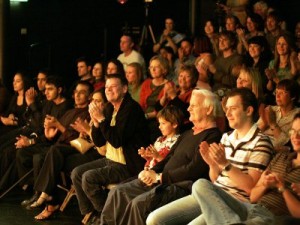 Being a good audience, though, is “much more than simply shutting up and slumping quietly in our seats”, as Lyn Gardner wrote recently. Theatre companies are beginning to recognise that “we are part of the theatrical equation”, and actors know how much audiences can vary from performance to performance. The Guardian suggests that with a sample of only 1500 the results should be read with caution. If people expect to behave as the results suggest they’re unlikely to experience what Lyn Gardner describes:
“But there are also those glorious nights when performers and audience seem perfectly attuned, firing off each other. These are the nights when the audience’s comic timing is as perfect as the actors and the quality of silence is golden, when everyone on stage and everyone in the auditorium knows that we have made this perfect evening together. ” Audiences can only expect to feel the intensity of the final scene of The Winter’s Tale, for example, if they’ve been paying attention.

Actors have to engage the audience, and Shakespeare, both actor and writer, describes the actor’s problem when talking about how Richard II is upstaged by the man who has deposed him:
As in a theatre, the eyes of men,
After a well-graced actor leaves the stage,
Are idly bent on him that enters next,
Thinking his prattle to be tedious.

The issue of actors’ techniques and audience engagement is discussed by Dr Jami Rogers’ blogpost of 29 August. As both a trained actor and an academic, she observes that in one recent thrust stage production instead of “characters talking to each other during scenes of high emotion”, “each and every one of them was gazing outward towards the audience”.  The result is that “none of them are able to engage either emotionally or intellectually with the other characters; not a single person is having a conversation with anyone else on the stage. It serves to make it Brechtian rather than allowing the audience into this world.”

Audiences can also feel excluded if actors don’t enunciate, and a few months ago actor Imogen Stubbs led a discussion on mumbling.  Andrew Billen, TV critic for The Times, found it affects both TV and the stage: “Trends in acting haven’t necessarily helped. Method acting tries to capture the “truth” of a character – even if that character can’t be heard properly – rather than bowing to stodgy old considerations about being audible from the cheap seats.”

Other actors can go too far the other way. Hamlet speaks for every author who has written for the stage:
And let those that play your clowns
speak no more than is set down for them. For there be of them
that will themselves laugh, to set on some quantity of barren
spectators to laugh too. 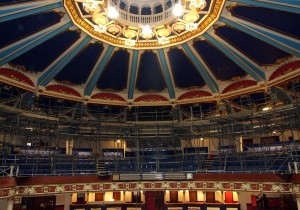 The Brighton Hippodrome, one of the theatres at risk

The good news is that young audiences are enthusiastic for live performance. But from seaside resorts to industrial cities all round the country, theatres are at risk of being demolished.

Lyn Gardner, again, suggests that time is up for some of these buildings, and that maybe another way should be found.  “Great shows need to reach the widest possible audience, and that means venturing out beyond our purpose-built cathedrals of culture. For years theatres have tried – often none too successfully – to entice more people into their buildings. If that doesn’t work, surely a better option is to present the work in non-theatre spaces alongside work from local artists?”

The Ticketmaster report also found the cost of theatre tickets was the biggest barrier for audiences, no surprise when West End tickets can easily cost £60. Taking some performances to unconventional spaces may enable more live theatre to take place. And nobody’s likely to complain because the audience haven’t got dressed up either.

One Response to State of Play: UK theatre audiences and actors