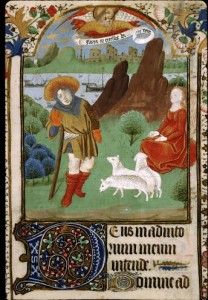 Annunciation to the Shepherds, book of hours (Bibliotheque Sainte-Genevive in Paris, c. 1433-1465

Now we’re in the grip of winter most of us don’t venture out for a walk without being muffled up in hats, scarves and gloves. While scarves are fashionable adornments at any time of year, hats and gloves are usually reserved for cold weather. But it’s not long since these garments used to be worn all year round and formed part of any respectable outfit.

Going back in history gloves had particular significance, and this is to be explored in a lecture on Wednesday 18 December entitled ‘Taking up the glove: Finds, uses and meanings of gloves, mittens and gauntlets in Western Europe, c.1400-1700 AD’. It’s being given by Dr. Annemarieke Willemsen from the Medieval Department, National Museum of Antiquities, Leiden. Here’s part of her abstract:
Late-medieval and early-modern people wore gloves, mittens and gauntlets for protection and decoration in many different contexts. They were made for men, women, and children: for workers, hawkers, fighters, preachers and lovers. They exist in wool, textiles, metals and leather, made to fit and sometimes lavishly decorated…. . There were rules for when to wear gloves, and when to take them off. They made suitable gifts and appear often as fashionable items in portraits. … Annemarieke Willemsen will be… presenting new research into the archaeology, iconography and symbolism of anything covering people’s hands in the late- and post-medieval period. 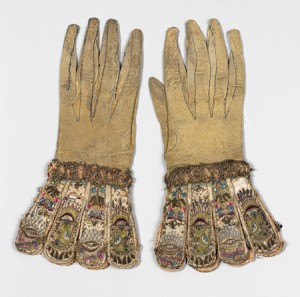 Organised by the Society for Post-Medieval Archaeology entrance is free, but seats at the Clore Learning Centre in the Museum of London have to be secured in advance. The lecture itself is from 7-8.30pm, preceded by a wine reception.

I’ve recently been reading some of the pamphlets relating to Shakespeare accumulated by members of my family, and my eye was caught by one written to celebrate the 1864 Tercentenary of Shakespeare’s birth. On closer examination it turns out to be an essay written (it is claimed) by E Moses, a London tailor and outfitter.
Our main purpose in this little pamphlet, is… to help to show…that the recognition of his greatness…is not confined …to any particular class, or rank, or profession…. Shakespeare has exhibited…such a familiarity with the practical details of different trades and professions, that some of his biographers…have endeavoured to illustrate his earlier personal history, by some of those allusions in his plays and poems which seem to indicate a more special acquaintance with certain particular employments than could be expected from any man…who had not served an apprenticeship to them.

The trade or profession which the pamphlet concentrates on is, not surprisingly, the making and supplying of clothes.
Shakespeare too well appreciated the importance of all external things and outward appearances, as emblematic of the unseen spirit, to deem it a profanation of the poet’s art to embody allusions to the subject of clothes in his majestic and immortal verse.

There is no shortage of references to clothes in Shakespeare from Macbeth, whose title hangs “like a giant’s robe upon a dwarfish thief” to Polonius’ precepts to his son in Hamlet that “the apparel oft proclaims the man”. And to Shakespeare gloves are among the most meaningful of items. Juliet’s glove is imagined as an intimate garment.
See, how she leans her cheek upon her hand!
O, that I were a glove upon that hand,
That I might touch that cheek!

Gloves (gages) are thrown down as deadly challenges by nobles in Richard II, worn as trophies in Henry V and exchanged by lovers in Troilus and Cressida. 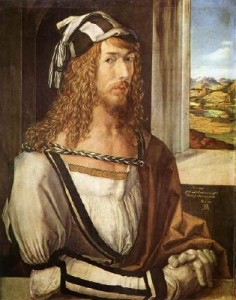 As suggested in the summary of the lecture, elaborate gloves made handsome gifts, embroidered and perfumed, and could be made from a variety of materials. In a miscellany compiled by Sir Francis Fane (1611-1680) there is a little rhyme which is supposed to have been composed by Shakespeare to accompany a gift of gloves which the master  at Stratford grammar school was to give to his mistress.
The gift is small,
The will is all,
Alexander Aspinall.
Alexander Aspinall was master at the school from 1582 until he died in 1624, and it has also been conjectured that he bought the gloves from John Shakespeare on the occasion of his betrothal in 1594. Needless to say there is no evidence for any of this, but it is a charming idea even if the verse is mundane. This website includes information and images relating to the history of gloves.

Shakespeare often displays a knowledge of the craft of glove-making. He talks of the tools of the trade “Does he not wear a great round beard, like a glover’s paring-knife?”, in The Merry Wives of Windsor and knows the qualities of raw materials. Cheveril is a kind of easily-stretched leather used in glove-making, and it’s mentioned by Mercutio as a symbol of something easily manipulated:
O here’s a wit of cheveril, that stretches from an
inch narrow to an ell broad!

The company of E Moses & Son claimed to be bespoke tailors for all classes, but they wanted to be seen as more than just tradesmen. In 1864 they published both their pamphlet on Shakespeare and another on “The Philosophy of Dress”, which contains press comments about the Shakespeare pamphlet. While the Chatham News was positive: “They have spent their money in a way that stamps them as above the ordinary run of advertisers. The whole is in excellent taste”, the Court Circular responded to a comment that reminds us of the snobbishness that surrounded tradespeople: ’A correspondent takes us to task because we have amongst our reviews a notice of the pamphlet…as if we had no right to recognise any literary talent in a tailor—as if no genius ever sprang from behind a counter.” No doubt the author had in mind the humble background of Shakespeare himself.

Finally, there’s also time to catch an exhibition that relates the manufacture and global trade in textiles to the development of empire. Interwoven Globe: The Worldwide Textile Trade, 1500-1800 will be on at the Metropolitan Museum of Art in New York until 5 January 2014. It’s also a celebration of textile-related crafts such as dyeing, weaving and embroidery. Amelia Peck, the exhibition’s lead curator said in an interview “this is the first time that anyone has created an exhibition that uses textiles to tell the story of worldwide trade in the early modern period.”