Fact or fiction: Shakespeare at Charlecote 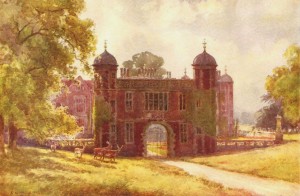 E W Haslehust’s painting of the gatehouse at Charlecote House

There are many legends about Shakespeare’s life, but none is more compelling than that linking him with Charlecote Park, near Stratford-upon-Avon. Local historian Dr Robert Bearman has just sent me details of a new publication that relates to it:
Anyone interested in Shakespeare’s life will have come across reference to
his alleged youthful deer-stealing activities at Charlecote Park, leading to
a life-long feud between him and the local lord, Sir Thomas Lucy. There have  always been problems with this story, not least that the Lucy family didn’t  seek official consent to create a park at Charlecote until 1615. Undeterred,  later purveyors of local folklore shifted the scene of the crime to  neighbouring Fulbrook where there *was* a park, or at least a run-down one,
during Shakespeare’s childhood. The problem here was the Lucys didn’t buy it
until after Shakespeare’s death! No doubt the story will prove more than a
match for these obstacles but those who prefer to deal in hard facts might
like to read about how the park at Fulbrook came into existence in the first
place. Leading social historian, Professor Chris Dyer, has recently
contributed an article on just that subject to the journal ‘Warwickshire
History’ (Vol. 15, no. 6, Winter 2013/14). With the aid of maps and diagrams
he demonstrates in great detail how, in the early 15th century, Fulbrook’s
lord, John Duke of Bedford (Henry V and Henry VI, Part 1!), built a grand
new house within the manor, at the same time transforming a traditional
landscape of open arable fields into extensive parkland. As for the village,
admittedly already in decline, it simply disappeared. Professor Dyer deals
only briefly with the later history of the park which became a royal
possession on the duke’s death and remained so almost until its purchase by
the Lucys, during which time the grand house was pulled down. He also steers
clear, perhaps wisely, of any reference to the deer-poaching story but the
article may still be of interest to those Shakespeareans wishing to sort
fact from fiction. To acquire a copy of the article, you can contact the
editor, Robert Bearman, via the Society’s email address:
info@warwickshirehistory.org.uk

The tradition is one of the earliest relating to Shakespeare’s life, as well as one of the most popular. In his book Shakespeare’s Lives, Samuel Schoenbaum considers its sources. It appeared in the first published biography of Shakespeare, written by Thomas Rowe to accompany his 1709 edition of the plays:
He had, by a misfortune common enough to young fellows, fallen into some ill company: and among them, some that made a frequent practice of deer-stealing, engaged him with them more than once in robbing a park that belonged to Sir Thomas Lucy, of Charlecote, near Stratford.  For this he was prosecuted by that gentleman, as he thought, somewhat too severely. 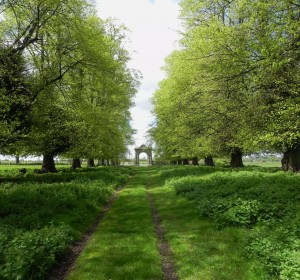 The avenue leading to one of Charlecote’s gates

The story continues that Shakespeare fled to London to avoid further trouble.  It’s made more convincing by the number of independent accounts that exist. One, a manuscript dating before 1709, notes that Shakespeare was “much given to all unluckiness in stealing venison and rabbits, particularly from Sir ____ Lucy, who had him oft whipped and sometime imprisoned and at last made him fly his native country.” Another, including a verse of a ballad said to have been written by Shakespeare and pinned to the gates of Charlecote House, was passed on by a man known to have died in 1703.

It surfaces in Shakespeare’s play The Merry Wives of Windsor where there are references to the three luces or louses (pike) on the Lucy coat of arms, and Justice Shallow has come to Windsor to make a Star Chamber matter of a poaching incident, blaming Falstaff for killing his deer. With so many doubts about the truth of the story, Samuel Schoenbaum wonders if locals, having heard or read about the story in Merry Wives, somehow invented the story of Shakespeare and the poaching episode. 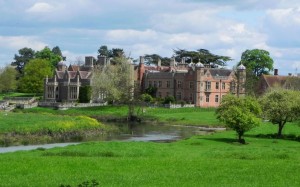 The romantic appeal of the story has proved irresistible ever since. The American author Nathaniel Hawthorne visited the Stratford area in the 1850s, and admired the beauty of Charlecote where “among those refined  and venerable trees, I saw a large herd of deer, mostly reclining, but some standing in picturesque groups, while the stags threw their large antlers aloft, as if they had been taught to make themselves tributary to the scenic effect. …They have held a certain intercourse with man for immemorial years; and, most probably, the stag that Shakespeare killed was one of the progenitors of this very herd.”

The National Trust, not surprisingly, agrees with Nathaniel Hawthorne in approving the story of the deer poaching, and the website for Charlecote Park includes a page on the subject. And even today few commentators can totally resist it, suggesting there may be at least a germ of truth in the story.

In my next post I’ll be looking at links between Charlecote and the performance of Shakespeare’s As You Like It.

2 Responses to Fact or fiction: Shakespeare at Charlecote