Shakespeare and Stratford in World War 1 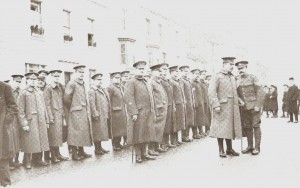 Recruitment in Stratford in the early years of the war

The outbreak of the First World War in late summer 1914 generated a huge recruiting campaign all round the country. In Stratford, where the summer Festival was taking place, a special performance of Henry V was mounted at the end of which the company marched on stage holding weapons including halberds and spears. The following day the leader of the company, Frank Benson, took part in the recruitment of soldiers in the neighbouring villages. The Benson company had always been great sportsmen and were known for their patriotism. Shakespeare was though of as the ultimate patriot, the plays dealing with foreign conflicts, Henry V and King John, often brought out at times of international dispute. And Stratford had a great reputation for recruitment: in 1914 a higher proportion of its young men than the national average signed up, and later on in the war the town gave generously to fundraising initiatives.

The WWI event at the RST

This last weekend the RSC held an event at which they have asked local people to share their stories of the First World War. The Foyer of the 1932 theatre was filled with people clutching mementoes, with representatives of the Warwickshire Regiment, family historians, RSC staff scanning and recording memories, and people from the Shakespeare Centre Library and Archive showing off some of the objects they hold which have a war connection. 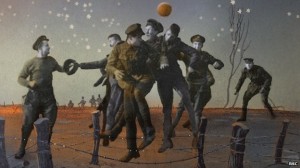 The RSC is involved is because in November the company will be staging a new play by Phil Porter, The Christmas Truce, inspired by the real-life famous football match held between German and British troops on the battlefield at Christmas 1914. This match was recorded by Bruce Bairnsfather, whose cartoons of life in the army became famous and who worked in the theatre for a time. Phil Porter is hoping to incorporate some of the stories that have been told during this weekend into his play.

But in 1914 the story was all about recruiting young men to fight. Looking at the old photographs of troops assembling to go off to war in the town centre it’s easy to make the connection with Shakespeare. The stirring battle speeches are the most famous, but Shakespeare also wrote about the business of recruiting in both parts of Henry IV. Both times, it’s his most famous comic creation, Falstaff, who is the one doing the recruiting. His contempt for his men, who he describes as”, “the cankers of a calm world and a long peace”, “scarecrows”, and “good enough to toss, food for powder, … they’ll fill a pit as well as better” must have been shocking even then. My Penguin edition of the play notes rather drily “Were he not a comic figure he could not but appear despicable here; the dramatic conventions of comedy protect him from the full implications of what he says”. The soldiers recruited in Stratford’s streets appear fit, but some look very young, and the photos are terribly poignant since we know how many never came back or if they did, bore the physical and psychological scars for the rest of their lives. 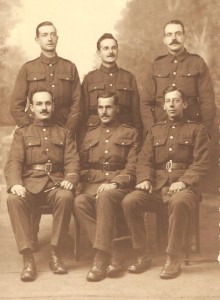 The battlefields must have felt like a million miles from leafy Warwickshire. But Stratford, and Shakespeare, were affected by the war. During wartime the Bensons, much-loved thespians, certainly were. The Bensons’ son was killed in the war, and they devoted their time to war work, cancelling the Shakespeare Festivals for a couple of years. I have only a very simple story of World War 1 in Stratford. My great uncle, George Harriss, was the professional golfer working at Stratford’s Golf Course. He didn’t go to war until 1916 when he became a driver, remaining in France until 1919. Although he wasn’t injured, after the war he became increasingly ill and died in 1929. He had been a popular young man, extremely handsome, and his early death caused his family great sadness. All her life his sister, my grandmother, kept a Christmas card he sent back from France in 1918 looking forward to his return to Stratford. Those at home suffered terrible anxiety, and there was a real sense of solidarity among the women left behind. I have the autograph book belonging to George’s wife, May, from the period. In November 1914 one friend wrote a beautifully-decorated version of “Auld Lang Syne”, and another, writing in May 1916, quoted a poem on the importance of love and friendship in uncertain times. Many of George’s family were Shakespeare-lovers, proud of their town’s connections. In 1912 George wrote a few lines for May in her autograph book which she must have treasured while he was away. The lines come from The Two Gentlemen of Verona:
she is mine own,
And I as rich in having such a jewel
As twenty seas, if all their sand were pearl,
The water nectar and the rocks pure gold.