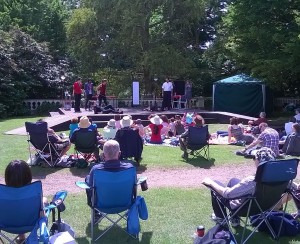 CL Rep Company performing their version of Hamlet in the Dell

This weekend just gone has been a great one for outside events: Wimbledon, the Tour de France in Yorkshire, and in Stratford the now-annual River Festival. Amazingly, the sun shone on them all. The Guardian recently published an article about the increasing number of outdoor theatre performances as a legacy of Danny Boyle’s spectacular Olympics opening ceremony, looking at issues about cultural value and funding.

Outdoor Shakespeare performances have also been multiplying. Here in Stratford The Dell, part of Avonbank Gardens that overlook the river, near Holy Trinity Church, has become a popular destination for outdoor daytime performances of Shakespeare. Visiting companies from all over the country perform in this informal of settings. This year there will be performances by the Royal Navy Theatre Association and companies from Gloucestershire, Newcastle-upon-Tyne and Yorkshire will be included.

With fingers crossed that the weather will stay good, here are links to some of the outdoor Shakespeares in the UK that you might like to see this summer:

The Cambridge Shakespeare Festival has been going for 27 years, performing over 8 weeks each year to audiences totalling 25,000. It’s a real plus that performances take place in the gardens of Cambridge Colleges. 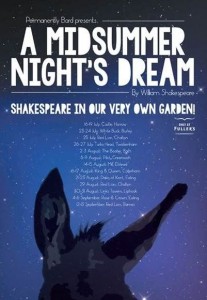 Permanently Bard, in association with Fuller’s Inns, is performing A Midsummer Night’s Dream in a series of pub gardens in the London area and south of England over the summer. You can order your own Elizabethan picnic basket and enjoy not only being outdoors, but having “a pint of Ale or a glass of wine on a sultry summer’s night”. They promise “an in-your-face, on-your-lap adaptation”.

For many people Regents Park Open Air Theatre IS outdoor Shakespeare, having been doing it for over 80 years, but this year is only offering Twelfth Night among its four-play repertoire, re-imagined for a young audience.

The Festival Players are performing The Comedy of Errors on a GB tour including Scotland, Wales, and even the Isles of Scilly over the summer months.

Oxford Shakespeare Company is putting on an outdoor production of As You Like It in the beautiful surroundings of Wadham College.

Other venues are playing host to touring companies: 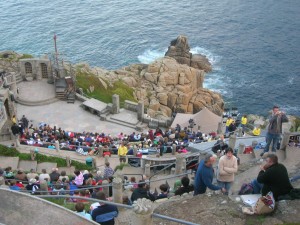 The Minack Theatre in Porthcurno, Cornwall has a unique setting on a cliff overlooking the sea, and this year plays host to three Shakespeares, The Tempest, Love’s Labour’s Lost and A Midsummer Night’s Dream.  This blog explains the venue’s attractions.

Also in the south-west, the Bristol Shakespeare Festival shows off lots of visiting companies in a number of different venues.

The Guardian article points out that a lot of street theatre is now of a high quality, and accessible to all. The Arts Council talks about ” great art for everyone… and everyone is pretty well covered by outdoor and street theatre. It is unique in dissolving the barriers between audiences and performers, daily life and fiction, and at its very best reclaims public space for us, encourages us to break the rules and break out of daily routines, and makes us look at the familiar world around us through different eyes.”

In another article Lyn Gardner writes about free theatre, challenging the idea that “free must be less worthwhile than a show that sells its tickets”. She cites a show Kadogo, Child Soldier that was performed in the Queen Elizabeth Olympic Part in London and many of the events at the Edinbugh Festival as evidence that “the lack of an admission price doesn’t correlate to a lack of ambition or risk”. Going to the theatre is always a bit of a gamble, no matter how much you’ve paid for the tickets. And the price of theatre tickets is certainly an issue. As she says:
I suspect that lack of critical coverage is one reason why free is treated with suspicion. Free seldom gets reviewed. But with a recent ticketing survey in the Stage finding that tickets to top shows in the West End have trebled over the past decade, and that premium seats are now nudging the £100 mark, there is an awful lot to like about free theatre. So do share your experiences of free shows and whether you felt the lack of an admission price compromised quality, or whether – like me – you think free is a fine way to go.

Free may be a fine way to go, but in terms of outdoor Shakespeare, the only one of the venues listed above that is free is the RSC’s Dell, and that, of course, is land owned by a company that receives a large Arts Council grant.  Lyn Gardner doesn’t offer an explanation of how the companies offering free entrance can afford to run their buildings or pay their performers, administrative staff and technicians. The Arts Council grants just announced certainly didn’t give much encouragement to theatre companies, with Propeller, for one, losing all its state funding.