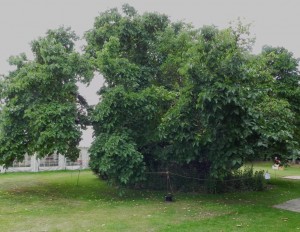 My current research on the development of celebrations for Shakespeare in Stratford-upon-Avon has really focused my attention on the importance of the historic mulberry tree and the site of New Place in the story of the preservation of Shakespeare’s town.

Both the original tree and the house were destroyed in the 1750s. The story is well known. The Reverend Francis Gastrell who lived at New Place became increasingly impatient with “pilgrims” wanting to see the mulberry tree which, by tradition, Shakespeare himself had planted in his garden. Eventually Gastrell was so fed up that he had the tree cut down and sold the wood  to the entrepreneurial Thomas Sharpe who turned it into many souvenirs. Items made from the tree almost assumed the status of holy relics: goblets and cups of mulberry wood continued to be used for toasts during the annual birthday dinners up to the 1840s.

Then Gastrell got into an argument with the local council over taxes. Gastrell’s response to anything he didn’t like seems to have been to destroy it. And so Shakespeare’s last home, or what remained of it (his actual house had already been replaced in about 1700), was knocked down.

I’ve always been rather sceptical about the story that Gastrell was drummed out of town following this action: the house stood almost next door to the Guild Hall where Council meetings were held: if feeling ran so high why wasn’t the demolition stopped? But I’ve been surprised to find the fate of the mulberry tree and New Place mentioned as a source of shame and as a warning to townspeople about the need for them to protect Shakespeare’s heritage against exploitation. 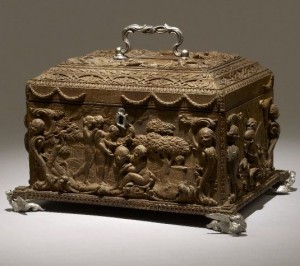 Only a few years later the town built an impressive new Town Hall, a symbol of its aspirations. In order to show its loyalty to Shakespeare it invited the great Shakespearean actor David Garrick to donate a statue to decorate it. To woo him, he was offered the freedom of the borough, presented in a box made of the wood of the sacred mulberry tree. Garrick ran away with the idea and created the famous three-day Jubilee in 1769.

The tree itself was replaced by a “scion” or cutting of the original tree, and this still stands in New Place Garden. References to it begin to appear when the celebrations of his birthday began in earnest. It was an essential part of the 1830 “Temple of Shakespeare” which was set up “embracing and canopying his Mulberry tree within his garden of New Place”. This structure was compared with the elegant pleasure gardens of Ranelagh and Vauxhall.

In 1833 the Warwickshire Advertiser announced that there were to be celebrations in Stratford again: “Several of the gentlemen of the neighbourhood, as well as several visitors from Warwick, Birmingham and other towns, with a few admirers of Shakespeare from the metropolis, mean to join the townspeople of Stratford”. Marking the day was almost a religious duty: “The worthy Mayor, Thomas Mills, Esq. [is] …one who remembers the sacrilegious down-cutting and up-rooting of Shakespeare’s mulberry tree…and his younger fellow-townsmen will need no exhortation from us to support him”. The tree-felling to which it refers had happened 70 years previously.

The following year Dr Conolly made a passionate speech linking the mulberry tree with the issue of honouring Shakespeare’s memory in his town.
The ruin of Shakespeare’s house, that house in which he lived and died, the sacrilegious destruction of his Mulberry Tree, the loss of almost every relic of him… are all melancholy proofs that for a long time after his death there was either an indifference to his immortal memory, or the want of a Shakespearean Club to concentrate individual regard and give it an honorable utility. You cannot raise his mansion from the dust, nor restore the original colours of his monument, you cannot make the mulberry tree put forth the green leaves and crimson fruit once more, but his works, his unrivalled works remain… they flourish with a perpetual spring, and of their precious fruits men will gather to the end of time.

By 1835 the Shakespearean Monumental Committee had been set up chaired by Dr Conolly. The immediate aim was to preserve the chancel of Holy Trinity Church with its Shakespearean graves, but the Committee was already thinking beyond that “even to the purchase of the site of New Place…a spot which, being yet unencroached upon, they are most desirous of guarding from new erections and consecrating to the memory of him whose name has rendered it in their estimation, hallowed ground”. 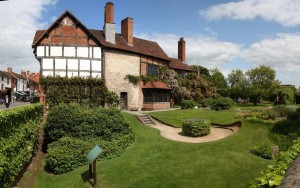 The site of New Place

When the estate of New Place became available in 1861 historian Halliwell-Phillipps acquired it specifically in order to protect it.  He aimed to make the estate over to the Corporation of Stratford-on-Avon, laying down conditions that “the purchase [was to be] for the free use of the public for ever, of property which formerly belonged to Shakespeare …upon Trust, that the Public should for ever have free access, and that no building should ever be erected on it”.  As so often in the long story of the Shakespeare properties, it didn’t quite work out like this, and the property was made over to the Shakespeare Birthplace Trust in 1875, after the small theatre that had been in the garden since 1827 had been demolished.

The site of New Place and its garden have indeed been left and remain almost unchanged. The Shakespeare Birthplace Trust is currently considering the future of the site. We may no longer see it as “hallowed ground”, but it is to be hoped that Halliwell-Phillipps’ intention to ensure the garden was  freely accessible to the public and the whole site clear of buildings will be honoured in this most atmospheric and historic corner of the town.