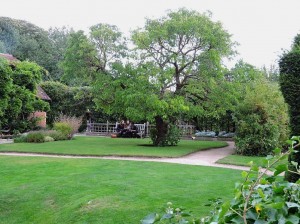 In August 2014 a further consultation is taking place on the future of New Place, Shakespeare’s last home, the final public consultation day being 30 August. Since the first consultation last year, I’ve spent a lot of time reading about how we in Stratford have celebrated Shakespeare’s life and works.

New Place itself has an interesting history. The original house was built towards the end of the 1400s, being purchased by Shakespeare around a hundred years later in 1597, though it’s thought he moved into it much later, perhaps as late at 1610. It had been built by the Clopton family who acquired it again towards the end of the 1600s and rebuilt it around 1702. It was this second house that was demolished by Rev Gastrell in 1759. The only thing we know for sure about Shakespeare’s occupation of New Place is that he died there.

Reading up about the history of Shakespeare celebrations I found documents written in 1861 when the whole site was acquired by J O Halliwell, who saw it as his role to save it. He “made [it] over in trust to the Corporation of Stratford-on-Avon, on the condition that the Gardens of the great National Poet shall never be built upon, and that the public shall for ever have free access”. Another document repeats that it is “for the free use of the public for ever…and that no building should ever be erected on it”. Halliwell’s intention that the Corporation would take over the site stalled, but when in 1876 the property was formally made over to the Trustees of Shakespeare’s Birthplace his hopes must have been the same. 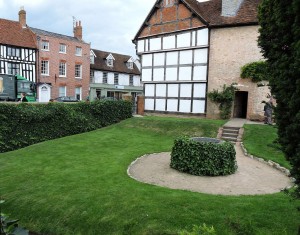 The foundations of New Place

The next year the Trustees issued a series of regulations regarding admission to the house and gardens, allowing paying visitors to the house access to the gardens, with the public having free access to the gardens on Saturdays through the Chapel Lane gates. Householders could pay 5s (25p) a year, ten times the cost of a visitor’s ticket, for a key. This system must have been a nightmare to administer, but wasn’t uncommon for people to pay for access to gardens: 1n 1933, before  the Gower Memorial was moved  to its current public spot, people were charged a shilling (5p) to view it, a cause of local resentment.

The foundations of New Place and its gardens, especially including the Great Garden, have been seen for many years as the place in which the spirit of Shakespeare lives on. There is nothing to distract the visitor in the gardens, which are beautiful in an old-fashioned, relaxed English style, with clipped hedges, old trees, flower beds and the ornamental Knot Garden. Only the Knot Garden has a formal air, plants confined within their allotted spaces surrounded by low box hedging, full of colour in the summer. 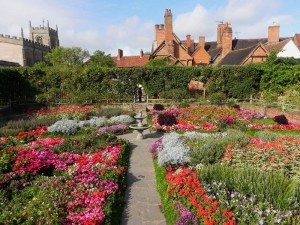 The Knot garden, looking towards the Guild Chapel and Falcon Hotel

In 1927 the young writer J B Priestley visited Stratford. Here is an extract from the essay, Seeing Stratford, which he wrote as a result.
And there was one moment, the other afternoon, when I really did feel I was treading upon his own ground. It was when we were in the gardens of New Place, very brave in the spring sunlight. You could have played the outdoor scene of Twelfth Night in them without disturbing a leaf… The little Knott Garden alone was worth the journey and nearer to Shakespeare than all the documents and chairs and monuments…I remember that when we left that garden to see the place where Shakespeare was buried, it didn’t seem to matter much. Why should it when we had just seen the place where he was still alive?

Having looked at the plans it seems to me that the best way of preserving Shakespeare’s spirit at New Place is to keep it natural, remembering that Shakespeare loved gardens, flowers and plants. After years of working in the noise of London he chose to come back to the small country town. Opening up the existing garden gates to allow free access to people during the property’s opening hours would be a great act of generosity for the Shakespeare Birthplace Trust,  providing a haven of peace in what is itself nowadays a very busy town. For visitors from abroad, and even from our own cities, it’s the lawns, flower beds, trees and birdsong that are unusual, and the beautiful River Avon, better than any artificial water feature, is only yards away.

So I would say honour the intentions of J O Halliwell, to whom we owe the preservation of the site and give the Great Garden back to everybody. Vandalism has been said to be an issue, but could surely be solved by better supervision. Remember the words of  J B Priestley, and tread softly in this special place full of echoes of the past and overlooked by buildings imbued with centuries of history.

If you wish to take part in the consultation, go to Stratford’s ArtsHouse (Civic Hall) on Saturday 30 August from 11-2, or look at the website.