The Two Gentlemen of Verona meet Shakespeare in Love

Posted on September 1, 2014 by Sylvia Morris 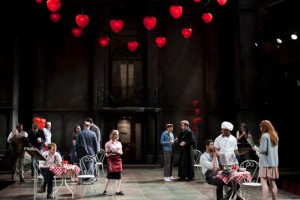 The RSC’s 2014 production of The Two Gentlemen of Verona

On 3 September 2014 the RSC’s production of The Two Gentlemen of Verona is to be broadcast Live from Stratford-upon-Avon to cinemas. I’ve written before about the way this enables people who would never have the chance to see plays in a theatre to get something like the live experience. The Two Gents is a particularly good example, because it’s a play rarely performed on stage. There have been three RSC productions in the Swan Theatre, one of which, in 1991, was particularly successful, and a cut-down version was performed in the RST in 1981, but it was last given a full production on the main stage back in 1970. The current production has received terrific reviews, and greeted with enthusiasm by audiences. The stage version closes on 4 September: with a hit on its hands the RSC must have wondered if they should not have scheduled extra performances.

The Two Gentlemen of Verona is possibly Shakespeare’s first play, and I agree with Charles Spencer, writing in the Daily Telegraph, that part of its fascination is that ” it contains the seeds of so much that he wrote later.” “This is the first of his plays in which the heroine disguises herself as a boy to go in search of her beloved, the first in which the characters find themselves in all kinds of trouble in a wood, the first in which love and youth triumph over the opposition of hidebound and obstructive parents.”

In that sentence alone we’re reminded of Twelfth Night, As You Like It, A Midsummer Night’s Dream and Romeo and Juliet, as well as the much later play Cymbeline in which Shakespeare revisited some of the same ideas. 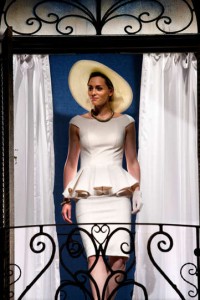 Spencer also notes “It all works a treat in Simon Godwin’s production, niftily designed by Paul Wills and set in modern Italy, with a dolce vita buzz of scooters, nightclubs and open air cafés. ” Well yes it does, but I’m surprised that the reviewers seem happy to accept Godwin’s view of the play as a bit of a romp. I certainly missed the poignancy of Julia’s dilemma, forced to go between her own lover and the lady with whom he is now in love. I was pleased, though, when Silvia was released from her distractingly glamorous designer outfits to rail at Proteus in pyjamas and finally an outfit she might have gone running in. I thought I heard an echo of another early Shakespeare play, which I’ve never noticed before. In Richard III, Clarence dreams of being accused: “Clarence is come: false, fleeting, perjur’d Clarence,… Seize on him Furies! Take him unto torment”.

In Two Gents, Silvia addresses Proteus in an encounter that reminded me, though mildly, of the scene in which Richard III woos Lady Anne:
Thou subtle, perjured, false, disloyal man!
Think’st though I am so shallow, so conceitless,
To be seduced by thy flattery,
That hast deceived so many with thy vows? 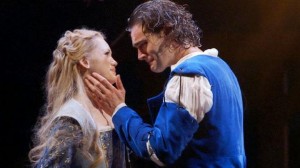 A scene from Shakespeare in Love, 2014

Only a week or so before seeing the RSC’s Two Gents, I’d enjoyed the West End version of Shakespeare in Love. It is of course The Two Gentlemen of Verona that Viola has seen and so completely fallen for. It contains several passages about love, one of which is probably the first such declaration Shakespeare wrote. In the play, Viola has learned it, and performs it for the benefit of members of the household.

In Shakespeare’s play, Valentine, Silvia’s true lover, is banished from her:
What light is light, if Silvia be not seen?
What joy is joy, if Silvia be not by?
Unless it be to think that she is by
And feed upon the shadow of perfection.
Except I be by Silvia in the night,
There is no music in the nightingale;
Unless I look on Silvia in the day,
There is no day for me to look upon;
She is my essence, and I leave to be,
If I be not by her fair influence
Foster’d, illumined, cherish’d, kept alive.

I’m always surprised that this beautiful passage is so rarely quoted in anthologies or spoken in recitals. Perhaps for obvious reasons it’s one of my favourite Shakespeare speeches, while the well-known song “Who is Silvia”, dreamt up by her other suitors Proteus and Thurio, is nothing like so good.

To hear both, get down to your local cinema on the 3rd September. And to get you in the mood for the opening, buy an ice cream on the way in: only a lucky few in the theatre each night are offered a free sample of gelato.

This entry was posted in Legacy, Shakespeare on Stage and tagged love, Shakespeare in Love, The Two Gentlemen of Verona. Bookmark the permalink.