A new chapter in the history of Shakespeare’s Celebrations 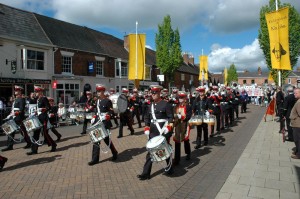 I’ve spent much of the past year or so researching the history of the celebrations of Shakespeare’s birth in Stratford-upon-Avon.  It’s a long and complicated story with its origins in the 1769 Garrick Jubilee, and I’m happy to report that after a few years of uncertainty the celebrations are entering a new phase.  Shakespeare’s Celebrations has been formed as a partnership between the Town and District Council, determined to revitalise this unique annual event that takes place on the nearest Saturday to Shakespeare’s Birthday, 23 April. I was privileged to be invited to the launch on 30 October at which the aims of the organisation were outlined.

It is “dedicated to leading the world in celebrating William Shakespeare’s life, through developing the traditional and globally recognised Shakespeare Birthday Celebrations in his home town of Stratford”.  It was heartening to hear Town Clerk Sarah Summers describe the continuing organisation of the Birthday Celebrations as a “no-brainer”, Stratford gaining enormous worldwide recognition and admiration from its association with Shakespeare. Both actor David Bradley, a Stratford resident as well as being famous for his work on stage and screen, and Dame Janet Suzman, have agreed to be Patrons of the organisation.

Finance has always been at the heart of the discussions about the Birthday Celebrations, the question being “Who should pay?” The new scheme will both “ensure that the festival benefits the community and economy of the Stratford district and that it is financially independent of public subsidy and is sustainable in its own right”.  Town Mayor Councillor Ian Fradgley, quoted in the Stratford-upon-Avon Herald, emphasised that the issue is not just about money but about community support and participation; the aim, he said, is to “establish a sustainable plan, which will benefit the entire town and wider community for years to come”. 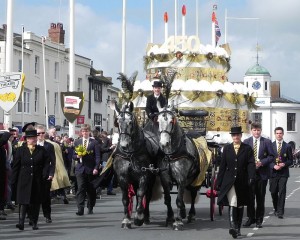 Assistance is being sought in a variety of ways. A Friends scheme is in place, starting at just £7 a year for individuals rising to more substantial donations for businesses, and it is possible to sponsor a flag or a banner along the route of the procession. This is not a particularly new idea: street decorations have been a big part of the Celebrations for over 150 years. To begin with individual businesses decorated their own windows and the pavements outside them, before becoming organised street by street in the early twentieth century.

New volunteers are also being sought to help out. A small army of volunteers has taken on a number of roles for many years: stewards accompanying distinguished visitors, marshalls helping to control the crowds, or workers behind the scenes ensuring the celebrations, which take over almost every street in the town centre, run smoothly. The additional volunteers being actively recruited will increase the opportunities for community participation in the main procession. And for those who just want to support this historic event it will be possible to become a Friend of Shakespeare’s Celebrations.

The website is already launched containing more information about how people can take part, and Shakespeare’s Celebrations has its own presence on Twitter @Shakespearescel . If you care about Shakespeare and want the traditional celebrations of his birth to continue, please consider becoming a Friend or volunteer to help make them thrive.