Shakespeare and the memories of the German nation 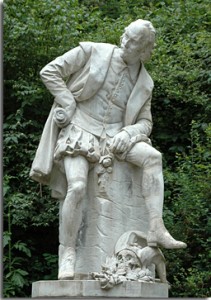 The statue of Shakespeare in Weimar, Germany

The British Museum is just about to launch its new exhibition Germany: Memories of a Nation.  Following a successful formula, the Museum’s Director Neil MacGregor has a Radio 4 series under way that links museum objects with an idea or event. He’s tackling Germany over centuries of its history from many points of view. Last week he got to the concept of Germany as a nation, and this is where, perhaps surprisingly, Shakespeare broke in.

One programme looked at Fairy tales and forests, and how in the early nineteenth century after Germany’s defeat by Napoleon the work of the Brothers Grimm came to be influential. I’ve just been reading Philip Pullman’s version of the Grimm Tales, and reminding myself, as MacGregor pointed out, how very strong was the idea of the forest in German culture. In Grimm’s tales the forest is usually threatening: in Hansel and Gretel, for instance, the children are abandoned in the forest which contains the witch who intends to kill and eat them, and other examples are Snow White and Rapunzel. Shakespeare drew on the Northern European tradition of forests being dark and forbidding, where witches and fairies might be met. This is often overlooked in favour of his debt to Italian sources, but the fear of forests comes from the same sort of folk tales as were later collected by the Grimms. In both Shakespeare and the tales, though, the forest is also the place where character is tested and evil is overcome.

The real obsession of the Brothers Grimm was the German language, and the way in which it had grown from within. Language bound Germans together in a way that was different from French or English, both of which had been heavily influenced by other languages. And English has become the most universal of languages: it’s because of this that Shakespeare is himself such an international figure.

The programme One nation under Goethe looked at the way Goethe unified Germans, but also at how heavily influenced the German poet was by Shakespeare. In 1771, inspired by the Garrick Jubilee two years before, and aged only 22, Goethe held a celebration of Shakespeare in his own house. He proclaimed : “The first page of Shakespeare that I read made me aware that he and I were one… I had been as one born blind who first sees the light…I did not hesitate for a moment to renounce the rule-ridden theatre of the ancients… I leaped into free air and for the first time was aware that I possessed hands and feet…In the face of Shakespeare I acknowledge that I am a poor sinner, while he prophesies through the pure force of nature”.

It’s a fascinating series, and will undoubtedly be a terrific exhibition, running from 16 October 2014 to 25 January 2015. Even if you’re not likely to get there I’d recommend listening to the podcasts and taking a look at the BBC’s website which includes, as well as images of all the items MacGregor has chosen to talk about, some enlightening maps and illustrations showing how Germany has contracted and expanded since the days of the Holy Roman Empire.