Shakespeare, politics and the history of Stratford-upon-Avon 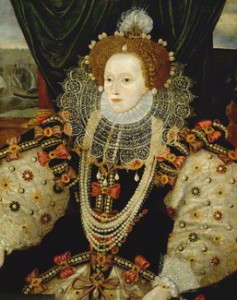 The Shakespeare Club’s October meeting consisted of a lecture by historian Nicholas Fogg on  Shakespeare and politics. It was perhaps no surprise that he had decided to look at the subject through a historical perspective, suggesting that to understand Shakespeare’s views of politics as shown in the plays, we need to drop some of our modern baggage as well as to take some on.

The world of politics has changed immeasurably since Shakespeare’s day. Politics was, for instance intimately bound up with religion, demonstrated by Measure for Measure which examines the responsibilities of the ruler in a setting where the main female character is about to become a nun, some of the scenes are set in a convent, and the ruler takes on the disguise of a holy friar.

He looked briefly at small-town politics, but suggested that although details of Stratford’s government surface in the character of the constable Dogberry, the town watch, and the beadle mentioned in King Lear, the Council on which Shakespeare’s own father sat contributed little to the characters and events of the plays.

Although local government may not have inspired Shakespeare, Nicholas Fogg examined the way in which local issues affecting ordinary people interested him. The poor are often seen as victims of the decisions made by those higher up the social scale. Though not mentioned by Shakespeare the dissolution of the monasteries a generation earlier had a knock-on effect as these sources of charity and protection for the unfortunate were not replaced, causing considerable hardship.

Shakespeare’s Henry VI plays show a fascination with the closely-knit web of nobles linked by blood who governed the country. Dynasties were created which fought it out amongst themselves, always trying to gain the favour of the monarch or, to replace him with their own leader . 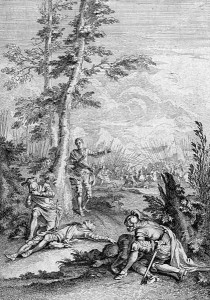 As the nobles argued, changed sides and betrayed each other civil war resulted. In the plays, it’s the common people who suffer: in Henry VI part 3 fathers and sons are shown in deadly conflict in one particularly poignant scene at the Battle of Towton. In all the History plays from Richard II onwards Shakespeare somewhere includes a speech about the history of the conflict being dramatised. It can feel like “the story so far”, but these speeches also serve the purpose of reminding audiences that the sins of the fathers are visited on their sons.

This blending of different social levels occurs again in Henry VI where the shepherd is the exemplar of order. The civil war Shakespeare writes about was only 67 years before his birth and there were a number of uprisings during his lifetime that could have resulted in a return to war. No wonder Shakespeare included this image, where the king, standing in for Christ, talks about being the shepherd to his flock, and, sitting on a molehill, he speaks about the sweetness of the life of the humble shepherd while battle rages around him.

The conflict between the king and his subjects reaches its height in Henry V where on the night before the battle of Agincourt the king, in disguise, has to defend the actions of the monarch against the ordinary soldier Michael Williams. Henry puts forward the doctrine of personal responsibility, and Nicholas Fogg brought us back to the present day with the thought that the same policy is still adopted by politicians today.

Although dismissive of the impact made by Stratford’s local politics on Shakespeare’s plays, Nicholas Fogg has returned in his latest book to the history of Stratford. It’s a subject he knows well.  In 1986 his book Stratford-upon-Avon: the Portrait of a Town was published. It was very different in tone from earlier history’s such as Levi Fox’s The Borough Town of Stratford-upon-Avon. Fogg concentrated on the very human story of the town and its inhabitants, not just its government, its architecture, or the history of the Shakespeare industry, although all were included. It did, however, end at the start of World War 1, a century ago. 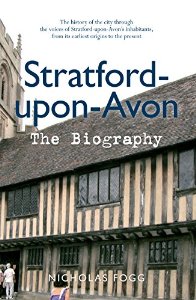 He has now filled this gap with a new book, Stratford-upon-Avon: the Biography, published by Amberley Press. Although the book owes a great deal to the earlier one, there is a great deal of reworking in the early chapters, and several chapters have been added at the end to bring the story up to date. The two world wars feature heavily and recent events of interest to Shakespearians are included such as the revamping of the Royal Shakespeare Theatre and the changes to the Shakespeare Birthday Celebrations. The book makes splendid use of past issues of the local newspaper, the Stratford-upon-Avon Herald. With his dedication to the recently-retired editor of the paper, Chris Towner, the author acknowledges the debt he owes to its weekly reporting of local scandals, crimes, celebrations and events from jumble sales upwards. The book also contains many stories from private individuals, testament to the author’s wide network of friends in the town and a reminder of how important enthusiasm and commitment is for the life of a small town, even one as famous as Stratford-upon-Avon.