Witchcraft on page and stage 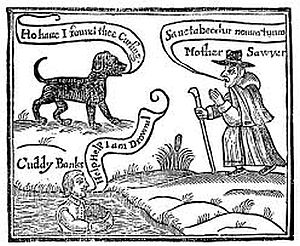 The image from the title page of The Witch of Edmonton

The Royal Shakespeare Company is currently staging the multi-authored play The Witch of Edmonton, first performed in 1621. It’s easy to see how attractive the play is since its subject relates so closely to Macbeth. In Shakespeare’s play the weird sisters are evil just because they are: there’s no sense of them as real people, no explanation of why they do what they do. Their appearance is sinister:
What are these,
So wither’d and so wild in their attire,
That look not like th’inhabitants o’ th’ earth,
And yet are on’t? … You should be women,
And yet your beards forbid me to interpret
That you are so.

And their powers make them dramatic, disappearing magically, cooking up a potion from grisly ingredients and conjuring apparitions. Mother Sawyer in The Witch of Edmonton  is labelled a witch because she is poor, old and ugly, and decides that she therefore might as well become one. Excluded and isolated from her community she turns to the devil in the shape of a black dog, Tom.

Witchcraft was of compelling interest in Shakespeare’s day. Witch trials had been held in Europe, particularly in Germany, for some decades before the first Acts of Parliament to control witchcraft came into force in 1542. Beliefs about witchcraft and the supernatural were encouraged by written and published work. Opinion was divided, but Reginald Scot’s 1584 book The Discoverie of Witchcraft was an attempt to prevent the persecution of vulnerable old women. He described them: “One sort of such said to bee witches, are women which be commonly old, lame … poor, sullen, superstitious … They are leane and deformed, shewing melancholie in their faces, to the horror of all that see them”, very like Mother Sawyer in fact. If Scot hoped to calm down the hysteria, he failed.

Shakespeare used as his main source book for the story of Macbeth Holinshed’s history of Britain, the Chronicles, but Shakespeare’s witches owe more to Scot’s description than to the image of the weird sisters that appeared in the first, 1577 edition. These three are rather well-dressed “nymphs”, and modern interpreters of the witches have often chosen to make them attractive or at least trustworthy: I’ve seen them played as children, as pretty girls, and, most chillingly, in the Patrick Stewart film, as hospital nurses. However they are interpreted they are unforgettable. 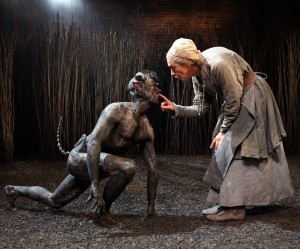 Jay Simpson as Dog, Eileen Atkins as Mother Sawyer in The Witch of Edmonton, 2014. Photo by Stewart Hemley

The Witch of Edmonton itself drew on a pamphlet by Henry Goodcole,  The wonderful discoverie of Elizabeth Sawyer, Witch, the real-life model for Mother Sawyer who had been executed on 19 April 1621. Goodcole’s Mother Sawyer, like that in the play, is a bit of a disappointment by contrast with Shakespeare’s witches. As Peter Kirwan comments in his review of the play in The Bardathon, “The Witch of Edmonton is an odd play to choose as a star vehicle”. It isn’t the fault of the excellent Eileen Atkins that in the play she appears infrequently, and isn’t given the opportunity to do  anything very interesting. In both productions I’ve seen, at TOP in 1981 and the one currently at the Swan Theatre, it’s the devil in disguise as a Dog, played by a young man wearing black body make-up and little else, who steals every scene.

Writing Macbeth just a year or two after the Gunpowder Plot, Shakespeare was inspired by King James 1’s known interest in witchcraft. James had been personally involved in the 1590 Berwick witch trials and his own book on the subject, Daemonologie, was published in 1597. A fervent believer himself, he used his book to promote the practice of witch-hunting. He claims “The fearefull aboundinge at this time in this countrie, of these detestable slaves of the Devil, the Witches or enchaunters, hath moved me..to resolve the doubting…both that such assaults of Satan are most certainly practised, and that the instrument thereof merits most severely to be punished”.

The subject remained high in the public consciousness. Middleton’s play The Witch was performed some time between 1609 and 1616, and elements of it illustrating the practice of witchcraft were inserted into Shakespeare’s play, no doubt to make it even more exciting. 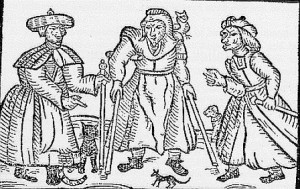 In 1612 the most infamous of witch trials took place in the north of England, mostly in Lancaster. Of twenty people accused of being witches eleven were eventually hanged. One of their supposed crimes was plotting to blow up Lancaster Castle, a charge thought to be a complete invention by the investigating magistrates.

Thomas Potts, the clerk to the court, was commanded to write an official account of the trial published in 1613 as The Wonderfull Discoverie of Witches in the countie of Lancaster. It seems that Potts’ account, extraordinarily detailed as it is, was designed to confirm the justice of the court system and to meet with the approval of the King. Some years later Potts, who had been brought up in the household of Thomas Knyvet who apprehended Guy Fawkes,  apparently received Royal favour.

At 6.30 on 27 November, at Lancaster Castle, there will be an event entitled “Beyond the Lancashire Witches: Writing and Freedom” that will include a dramatization of the womens’ testimonies as well as looking at contemporary writings inspired by the prison and the Castle.