Italy and the Italians in Shakespeare 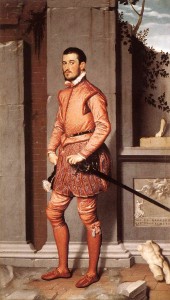 The Gentleman in Pink

The English have been fascinated by Italy for centuries, never more so than during the period in which Shakespeare lived. Sir Henry Wotton, who represented King James as the English Ambassador to Venice from 1604, was more knowledgeable than most. Wotton brought back to England glorious paintings of the Venetian Doges that are still in the Royal Collection, and a birds-eye view of the city painted in 1611 which he proudly donated to Eton College and still hangs there.

Doctor Carol Rutter is researching Wotton’s life in preparation for a full biography of the fascinating man. The surviving comprehensive archives of the city contain much information about its organisation and the confidence of its rulers, but Venice was also a place of questionable morals, as in Othello and The Merchant of Venice.

It wasn’t just Venetians who were rich and fashionable, as the paintings of the Italian artist Giovanni Battista Moroni testify. Little is known of Moroni, who is thought to have been born between 1520 and 1524, and to have died in 1579 or 1580 in the little north-Italian town of Albino. Unlike more famous painters who headed for the main cultural centres in Italy he worked within a fairly small area between Bergamo and Albino, an area governed by Venice. The recent exhibition of his work at the Royal Academy has brought new attention to his portrait paintings, and I caught it just before it ended.

When establishing himself Moroni moved to Bergamo where he painted members of the local aristocracy. Rich and fashionably dressed, the painting show the sitters, many of whom are anonymous, full length. Moroni doesn’t flatter them, and they sometimes look rather awkward: perhaps they’re not as sophisticated as their clothes make them look. Their gorgeous costumes, complete with jewellery and expensive accompaniments like swords, gloves, fans and books, are all exquisitely painted. Some of the paintings tell us more about the wealth and status of the sitter than their identity and character. 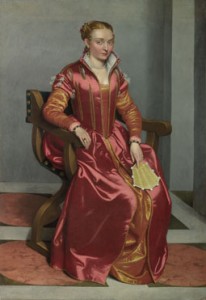 The Lady in Red

The aristocratic ladies have the wealth of Shakespeare’s Portia, wearing their glorious clothes slightly self-consciously, and seem confined by their wealth just as Portia is by her inheritance. The young men seem like her suitors, looking as impressive as they can in order to make a good marriage.
In Belmont is a lady richly left,
And she is fair, and, fairer than that word,
Of wondrous virtues…
Nor is the wide world ignorant of her worth,
For the four winds blow in from every coast
Renowned suitors, and her sunny locks
Hang on her temples like a golden fleece…
And many Jasons come in quest of her.

Moroni’s most perceptive paintings come from the period after he returned to the smaller town of Albino, where he had been brought up. 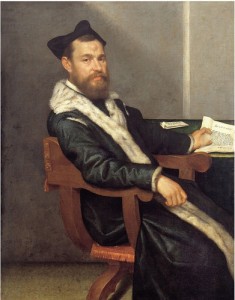 Portrait of a Doctor

Many of these people are middle-class: doctors, lawyers, even a tailor.  Moroni increasingly moved away from elaborate backgrounds to concentrate on the faces and upper bodies of his sitters, including their hands. These people seem more comfortable: they’re not trying so hard to impress. Here are confident, humorous young men like Benedick and older people with faces full of character. My eye kept on being drawn to the portrait of the old man below, apparently a lawyer, though it was the likeness to Paul Scofield’s King Lear that kept me looking. Moroni’s old man, “disgruntled” according to Sarah Dunant, gives the viewer a challenging look. 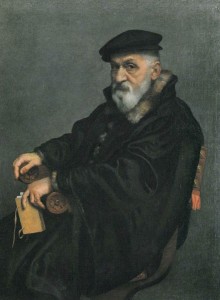 Portrait of an Elderly Man Seated with a Book

Moroni’s paintings were highly valued in London during the nineteenth century, when his style was admired by other creative artists. The exhibition catalogue quotes George Eliot’s description from Daniel Deronda of the character Grandcourt “the chair of red-brown velvet brocade was a becoming back-ground for his pale-tinted well-cut features and exquisite long hands: omitting the cigar, you might have imagined him a portrait by Moroni, who would have rendered wonderfully the impenetrable gaze and air of distinction; and a portrait by that great master would have been quite as lively a companion as Grandcourt was disposed to be”. The sitters are both mysterious and familiar, like so many of Shakespeare’s characters are.

If you want to immerse yourself in Shakespeare and Italian Renaissance Culture, the second summer school organised by Shakespeare in Italy will be perfect. Last summer’s two-week school was so successful they are repeating it, once again in the beautiful city of Urbino, a walled city in the hills further south. The City is a World Heritage site, the birthplace of the painter Raphael and the setting for Castiglione’s Book of the Courtier. Director Bill Alexander and actors Josie Lawrence and Michael Pennington will be leading studies on Othello, The Taming of the Shrew and Coriolanus and the school is organised by actors Julian Curry and Mary Chater.