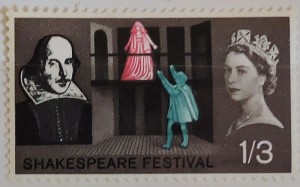 A few weeks ago the Royal Mail launched a celebration of fifty years of “special stamps”. They claim “Before 1965, ‘Commemorative Stamps’ were issued occasionally and mostly for Royal and Postal events and anniversaries. New Postmaster General Tony Benn revised the criteria for stamps and in 1965 key decisions as to the future scope and design of regular ‘Special Issues’ were made”.

TV historian Dan Snow introduces the subject in this video.

But hold on just a cotton-picking minute! What about the Shakespeare Quatercentenary in 1964, for which a whole series of pictorial stamps were created? Our Will was the first commoner ever to appear on a British postal stamp, and let’s not forget it or sweep it under the carpet just because they want an anniversary. As Stamp Magazine explains, at the time the Post Office fudged the whole issue:

“The Post Office’s long-standing refusal to countenance stamps in honour of famous people gave it a problem in 1964 when there was agitation for a special issue of stamps to mark the 400th anniversary. But it found a way around its discomfort. It argued that its special issue was to celebrate an event of international importance (the annual Shakespeare Festival at Stratford), rather than the man himself. Nevertheless, this was a real break with previous policy, in that the four lower denominations featured the first portrait of a commoner to appear on British stamps.” 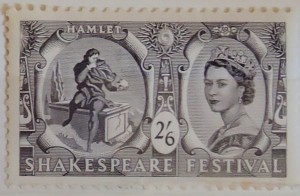 The highest denomination stamp showing Hamlet and the skull

This post from the British Postal Museum and Archive agrees: “Surprisingly, given the importance of Shakespeare’s contribution to world culture, requests to commemorate the 400th anniversary of his birth on stamps were not immediately approved. At the time the Post Office would only mark Royal or postal anniversaries, and current events of national or international significance.”

In his Memoir, Levi Fox, the Director of the Shakespeare Birthplace Trust, notes that he suggested a special issue of stamps to the Postmaster General on 14 January 1961, only to be told that the Post Office “had never issued stamps to commemorate the birth, death or achievements of individuals, however distinguished or admired”. No person other than the Queen was allowed to be shown on stamps, and if an exception was made, it would then be impossible to turn down similar requests. He began lobbying vigorously, eventually arranging for the issue to be raised at Question Time in the House of Commons after which he was informed that the decision had changed. The commemorations did amount to “an outstanding event fully warranting a special stamp issue”. The stamps were phenomenally successful. By the beginning of December 1964 195 million single stamps had been sold and stocks were almost exhausted. Mr Fox writes with some satisfaction :“A successful precedent having thus been set, the issue of special stamps to commemorate national figures and events subsequently became a regular feature of Post Office activity”.

Getting a set of stamps was a really big deal at the time, particularly as unusual stamps were so rare. Those 195 million stamps flew everywhere in much the same way as messages on social media go viral today. The British Postal Museum and Archive explains: 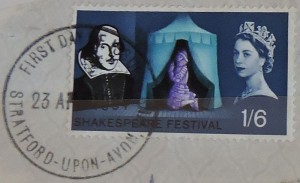 “From 1952 to 1964…there were only 20 commemorative issues and 16 of these were in the last five years. Postage stamps, by their very nature, are distributed all over the world, and when it came to the international celebration of the Quatercentenary of Shakespeare’s birth, in 1964, nothing would have a bigger impact than a special issue of postage stamps by the British post office.“

The 1964 stamps were of simple, striking design. The main ones were designed by David Gentleman, each one depicting a scene from one of Shakespeare’s plays: Henry V kneeling before battle, and the Balcony Scene from Romeo and Juliet, for instance. Gentleman went on to design 32 covers for the Penguin Shakespeare and he has created murals for the London Underground. The two-shillings and sixpence stamp was by brothers Christopher and Robin Ironside and showed Hamlet contemplating Yorick’s skull. Christopher Ironside has since spent much of his career designing coins. David Gentleman later noted that the representation of Shakespeare’s head on the stamp alongside the Queen’s “caused a fuss that would be unimaginable now,”. 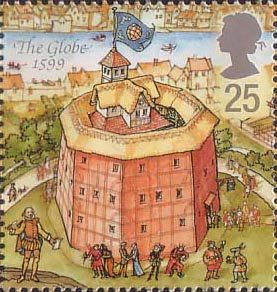 A further set of special stamps is particularly notable. The 1995 set of stamps celebrated Shakespeare’s theatres as the Shakespeare’s Globe reconstruction reached completion. These were little objects of beauty in their own right, by C Walter Hodges, a Shakespearean scholar as well as a terrific artist. I’m indebted to the author of this website  for pointing out “along the bottom of the se-tenant strip of five are some of Shakespeare’s best known characters…In the enlarged version of the [1599 Globe stamp]…Shakespeare himself at bottom left, then…Macbeth and Lady Macbeth, Romeo and Juliet, Hamlet, Richard III, Falstaff and Bottom”. All the stamps are equally worth examining under magnification, so detailed are Hodges’ designs, and they are all to be found here. They haven’t announced the 2016 crop yet but let’s hope there will be special stamps to commemorate the Quatercentenary of Shakespeare’s death.

2 Responses to Shakespeare in stamps