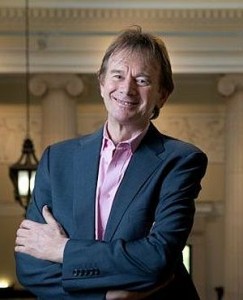 The BBC’s serialisation of Hilary Mantel’s novels Wolf Hall and Bring Up the Bodies is proving grippingly good. To complement these programmes about “the glittering –though at times terrifying- world of the Tudor court” a new documentary on more ordinary people is being shown on BBC4 on Thursday 12 February: it “tells the story of a woman touched by new opportunities in society, work and education, in a century that saw the birth of England’s cultural and economic greatness.” Made by renowned TV historian Michael Wood it’s entitled Mary Arden: a Tudor Life. Mary Arden was “the daughter of a 100-acre farmer in a small village in Warwickshire. Mary had eight children, three of whom died young, and went through many family disasters and tragedies. But what makes Mary’s life especially fascinating is that one of her sons was William Shakespeare.”

Mary’s life “spanned one of most dramatic periods of change in our history: her childhood during the last years of Henry VIII; her youth under Mary Tudor, in the last days of Catholic England, and her married life through the reign of Elizabeth, to her death under James I – by which time her son William was a well-off royal servant and the most famous poet of the age.” The programme will ask “what role a Tudor woman had, working on the farm with her father, and then in business with her husband; whether she could read and write; how she brought up her children; the stories she told, and the beliefs she passed down in an age of religious persecution; and how the political battles of the Elizabethan state could touch even an ordinary family.”

Michael Wood has taken an interest in Mary Arden since at least 2001 when he filmed his biographical series “Searching for Shakespeare” (released on DVD). At the time he aimed to “reveal a man who is the product of his time – a period of tremendous upheaval that straddled the medieval and modern worlds”.

In his book of the series, Michael Wood explained: “The story of a person’s life begins before he or she is born. It is our family that shapes our values and our ways of seeing, that gives us our deepest fund of tales and images: stories at our mother’s knee; our observations of the way the family works; the relationship between our parents”.  William Shakespeare “came from farming stock: old families rooted in the Warwickshire countryside”. 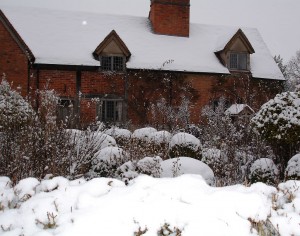 I’ve recently seen Mary’s father Robert described as a “peasant farmer”, but this is far from the case. My husband, Richard Morris, was for many years Chief Guide at Mary Arden’s House, in Wilmcote and he has supplied me with the following information. Professor Christopher Dyer wrote “We know that Robert Arden, Mary Arden’s father, was already a person of some substance when he paid 6s 8d to join the Stratford Guild in 1517”, and in 1538 “Robert was playing a prominent role in the religious fraternity at Aston Cantlow, which would suggest an important person in village society”.

Robert Arden farmed 150 acres of land in Wilmcote owned by Lord Abergavenny and owned farmland in the village of Snitterfield which was rented by the Shakespeares. This is probably how John Shakespeare got to know Mary.

The known facts about Mary Arden’s life are few: it’s thought she was born between 1536 and 1538, just the time of the Dissolution of the Monasteries, and when each parish was instructed to acquire a copy of the Bible in English. It’s going to be interesting to see what evidence Michael Wood is going to give us about the education of a typical woman of her time.

We know quite a lot about Robert Arden’s finances because he made a will, and the inventory of his goods survives. Mary was named as his executrix. It shows him to be relatively affluent, as well as showing how his house was furnished. Michael Wood notes that the objects mentioned in the 1556 inventory were absorbed into Shakespeare’s vocabulary: “Not only the cloths on the wall, with their frightening and fascinating images, but the skillets, iron crows, pails, mattocks, cauldrons, augers, querns, handsaws, joint stools, cupboards, benches, bolsters, pillows and diapers – words that all appear in his plays”. 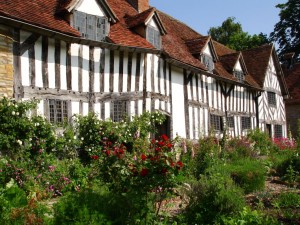 The house that was the subject of the inventory still stands, and from 14 March 2015 will be open for the summer.  In the late 1990s the Shakespeare Birthplace Trust commissioned a number of reports on the documentary and physical evidence for the house. The results were received just before Michael Wood came to film. The investigations showed that the house previously known as Glebe Farm, 50 yards along the road, was actually Robert Arden’s house and the one traditionally known as Mary Arden’s House was a later building owned by Adam Palmer. Self-appointed local historian John Jordan had made the mistake in the eighteenth century. By an amazing coincidence the SBT had acquired Glebe Farm to prevent development of the site, but it was the wonderfully-atmospheric Palmers Farm that Michael Wood used for his filming. If you’d like to read up, here’s a link to an article about Shakespeare written by Michael Wood.

3 Responses to Michael Wood and “Mary Arden: a Tudor Life”