Looking forward to spring and the art of the garden 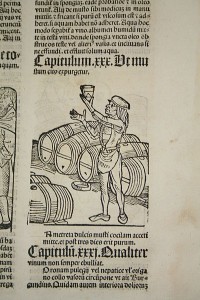 A page from Ruralia Commoda

The British love affair with gardening is well-known, and opening on 20 March and running until 11 October is an exhibition at the Queen’s Gallery, Buckingham Palace called Painting Paradise: The Art of the Garden. Building on the success of the TV series Wolf Hall, the exhibition will highlight a horticultural manual that once belonged to Henry VIII himself.  The book, Ruralia Commoda, is a latin text written between 1304 and 1309 by an Italian lawyer, Petrus de Crescentiis. It’s described as the world’s first gardening manual, and may have inspired the lost garden of Whitehall Palace.  It apparently includes instructions on how to lay out a “royal garden”, including instructions on building walks and bowers “where the king and queen can meet with the barons and lords when it is not the rainy season”. The book also includes more practical advice about how to grow giant leeks and succulent fruit such as cherries and figs.

The exhibition will look more generally at the history of gardens, focusing on royal gardens such as those at Hampton Court Palace, Windsor Castle and Kew. Items from the Royal Collection will be on display including exquisite enamel and jewel flowers by Faberge, tapestries, porcelain, tableware and drawings, all featuring plants and flowers. 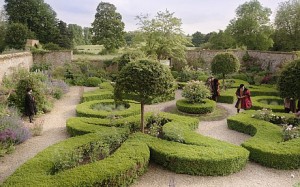 A garden scene from Wolf Hall

The National Trust provided many of the locations, both interior and exterior, for Wolf Hall, and is expecting a “Wolf Hall effect” at their houses and gardens this year. Apparently they hope to get 25% more visitors at houses featured in the series, and they’ve produced a useful guide for those wanting to visit the spots where the series was filmed.

Back to humbler gardens, now it’s March, our thoughts turn to spring and the season ahead. Thomas Tusser, always one for forward planning, writes:
In March and in April, from morning to night,
in sowing and setting, good huswives delight:
To have in a garden, or other like plot,
to turn up their house, and to furnish their pot.

It’s a bit early yet, but in The Winter’s Tale is one of Shakespeare’s most lovely tributes to the flowers of spring:
O Proserpina,
For the flowers now, that frighted thou let’st fall
From Dis’s waggon! daffodils,
That come before the swallow dares, and take
The winds of March with beauty; violets dim,
But sweeter than the lids of Juno’s eyes
Or Cytherea’s breath; pale primroses
That die unmarried, ere they can behold
Bright Phoebus in his strength—a malady
Most incident to maids; bold oxlips and
The crown imperial;

In Stratford, a few daffodils are already out, despite the freezing winds we’ve experienced for much of the year so far, and a couple of exotic camellias are in bloom in sheltered corners. On the Avon itself, and the gardens nearby, birds are in breeding plumage and indulging in courtship behaviour. And for us humans, there’s a real warmth in the sun now. Although they’re a reminder of winter, I love the trees at this time of year, the sun on their barks, branches bare against the sky. Here are a few photographs taken recently on walks around the Avon the surrounding green spaces in Stratford-upon-Avon. 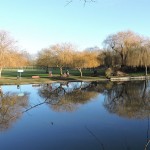 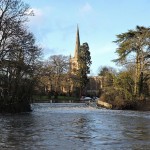 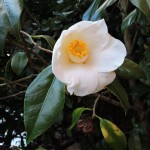 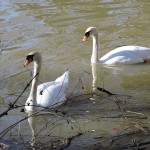 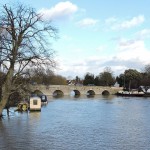 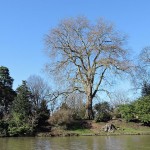