Shakespeare and the Greeks 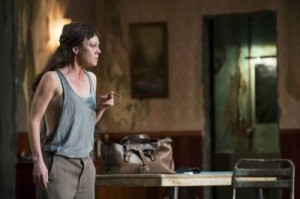 Every few years the tragedies of ancient Greece seem to come back into fashion, and just now, in 2015, several theatres are staging revivals or adaptations of these powerful ancient plays.

On 24 March the Almeida’s new season goes on sale with productions of several Greek tragedies. It begins in May with Aeschylus’s Oresteia trilogy, an “apocalyptically bloody family feud”, adapted into a “leaner modern reading”. This will be followed by an adaptation of The Bacchae, with Ben Whishaw as Dionysus and a new production of Euripides’ tragedy Medea with Kate Fleetwood.

One of the reasons for the current popularity of these plays may be the great dramatic roles they provide for women. The Almeida’s follows an acclaimed production of Medea at the National Theatre last autumn featuring Helen McCrory as Medea. This production of this story of a mother’s murder of her children was highly acclaimed. 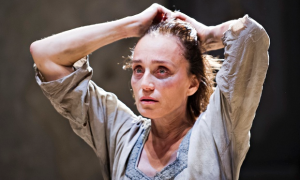 Also at the end of last year Kristin Scott-Thomas played a powerful Electra at the Old Vic. The Guardian review wrote: “Drained to a dust grey, rigidly held, eyes fixed wide, it is the face of an obsessive. She is both galvanised and ground down by her terrible purpose, of avenging her father’s death by arranging the murder of her mother… It is hard to watch Electra without thinking of Hamlet. She is the prince without vacillation. The avenger who acts. She is also the proof that we don’t need to cross-dress Shakespeare to give a woman a mighty role.”

At the Barbican until 28 March Juliet Binoche is playing Antigone in a production that will then go on international tour and will be filmed for BBC4. It’s a pity then that the production has not been more positively received.

Later on this year, from the end of August to October, Shakespeare’s Globe is also doing a version of the Oresteia in which “the original trilogy will be distilled into one thrilling three-act play”.  The trilogy relates the story of how Agamemnon sacrifices his daughter before leaving for the Trojan War, triggering a whole series of other murders over many years: Agamemnon is killed by his wife Clytemnestra on his return, and their son Orestes has to avenge his father’s death by murdering his mother. The unfolding of this unending cycle of revenge is one of the greatest of stories.

There are a number of parallels between Hamlet and Orestes. Both lose their fathers by murder, and both are denied their father’s throne. In their revenge both their mothers and their new husbands are killed. But whereas a resolution is found at the end of the Oresteia, Hamlet ends with the violent death of nearly all the main characters. 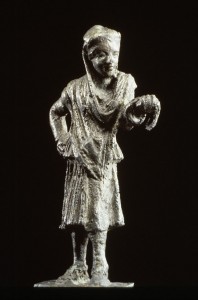 Bronze statue of a Greek actor in female dress

Public booking has just opened for the RSC’s production of Hecuba, another play about the Trojan War being staged at the Swan Theatre in autumn 2015. It’s to be another new adaptation, directed by Erica Whyman.
Troy has fallen. It’s the end of war and the beginning of something else. Something worse.  As the cries die down after the final battle, there are reckonings to be made. Humiliated by her defeat and imprisoned by the charismatic victor Agamemnon, the great queen Hecuba must wash the blood of her buried sons from her hands and lead her daughters forward into a world they no longer recognise. Agamemnon has slaughtered his own daughter to win this war. But now another sacrifice is demanded… In a world where human instinct has been ravaged by violence, is everything as it seems in the hearts of the winners and those they have defeated?

Shakespeare’s play about the Trojan War is Troilus and Cressida, but rather than using any of the original plays, or indeed the Iliad or Virgil’s Aeneid as sources, Shakespeare took his story from medieval writings such as Caxton’s Recuyell of the Historyes of Troy, Robert Henryson’s Testament of Cressid, and Chaucer’s version of the story in Troilus and Criseyde that focuses on the love story rather than the war itself.  Troilus and Cressida is quite a late play, but the story appears in one of Shakespeare’s earliest works, The Rape of Lucrece. References to the Trojan War are scattered through Shakespeare’s plays. In Henry IV Part 2 Pistol calls Doll Tearsheet a “lazar kite of Cressid’s kind”, and the sack of Troy itself provides the speech which Hamlet asks the First Player to perform.
One speech in’t I chiefly lov’d. ‘Twas AEneas’ tale to Dido, and thereabout of it especially where he speaks of Priam’s slaughter… ‘
The rugged Pyrrhus, like th’ Hyrcanian beast-‘ ‘
Tis not so; it begins with Pyrrhus: ‘
The rugged Pyrrhus, he whose sable arms,
Black as his purpose, did the night resemble
When he lay couched in the ominous horse,
Hath now this dread and black complexion smear’d
With heraldry more dismal. Head to foot
Now is be total gules, horridly trick’d
With blood of fathers, mothers, daughters, sons,
Bak’d and impasted with the parching streets,
That lend a tyrannous and a damned light
To their lord’s murther. Roasted in wrath and fire,
And thus o’ersized with coagulate gore,
With eyes like carbuncles, the hellish Pyrrhus
Old grandsire Priam seeks.

If you would like to read more on the subject, there’s an introduction to Greek tragedy on the National Theatre’s website.