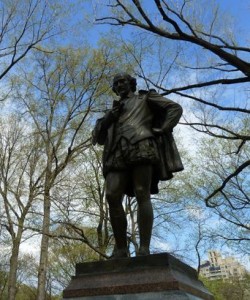 The statue of Shakespeare in Central Park New York

My last blog post looked at some of the more official celebrations of Shakespeare’s birthday being held in Stratford, London, New York and Washington DC.  This time I’m filling in some of the gaps by including some links to other celebrations or resources that those of you who aren’t able to take part in in person might find fun during this special week.

First of all,  I’ve been told of a free, open to the public, celebration of Shakespeare that will be held at the outdoor Naumburg Bandshell in Central Park from 1-4pm on Friday 24 April. It”s the 5th Annual Sonnet Slam, during which each of Shakespeare’s 154 sonnets will be read out in numerical order by 154 different volunteers. Readers include the British Deputy Consul General Nick Astbury, author Adam Gopnik and as you might expect several Broadway stars. 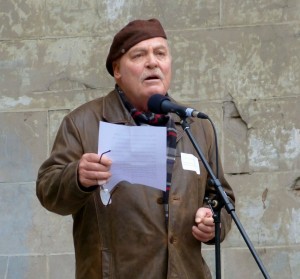 The photo shows renowned actor Stacy Keach who took part in 2012 and this clip is of actress Dana Ivey kicking off the proceedings in 2014 with a reading of sonnet 1. The Sonnet Slam is the creation of Melinda Hall who describes it as “a unique opportunity for the Sonneteer and Shakespeare to be together on the Bandshell stage, even if it’s only for a minute”. With readers of all ages taking part it should be a lot of fun so do go along if you’re able to.

Plus a video clip of Sonnet #18 as performed last year in ASL:

New York has a long history of performances of Shakespeare. There is a record of a possible amateur production of Romeo and Juliet in 1730, and in 1750 Richard III was performed, followed in 1751 by Othello. For many decades, though, Shakespeare was the preserve of English actors on tour. One of the greatest, who had enormous success in New York between 1820 and 1825, was Edmund Kean who played a wide range of roles including Richard III, Othello, Macbeth and King Lear.

Separate from the Sonnet Slam, there is also a project in progress at the moment to film each of Shakespeare’s sonnets “through a New York lens”. Each one is being filmed at a different  location. The Sonnet Project is the work of the New York Shakespeare Exchange: the films appear on the Sonnet Project website, and Sonnet 108 will appear on 22 April. Sonnets are linked with locations, so for instance “the legal-minded Sonnet 46 [is filmed at] the State Supreme Court building.” The sonnets can be searched by location and they are also hoping to build a walking-tour app. 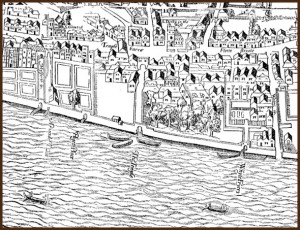 Part of the Agas Map of London

In London, to celebrate Shakespeare’s Birthday on 23 April the walking tour company Footprints of London are holding a day of walks celebrating Shakespeare in London. You can choose between Shakespeare in Shoreditch, Shakespeare on Bankside and Shakespeare in the City. You might think there is little left of  the London Shakespeare knew but these guided walks will reveal more of the city as it was.

In addition to these walks, there’s a great new interactive map of Shakespeare’s London now available from the University of Victoria in Canada. It’s based on the Agas Map of the city that shows it in great detail and is the brainchild of Janelle Jenstad. As well as the map there is information about the early modern period and about the different buildings it shows. There’s an introductory video on this page.

Another wonderful resource on the early modern theatre in London is the ShaLT (Shakespearean London Theatres) website. There’s a walking map with five suggested walks, and on this page there are about 20 films on lots of different aspects of the subject.

On the subject of walking tours, I must mention the prize-winning Stratford Town Walks. They offer walks every day of the year, even Christmas Day and Shakespeare’s Birthday, and are led by knowledgeable and enthusiastic guides. Stratford-upon-Avon is an ideal size for a walking tour and I’d recommend these to any visitor to the town.

Enjoy Shakespeare’s birthday this week, whether you’re able to get out and about, or just enjoying the virtual experience on your computer screen.