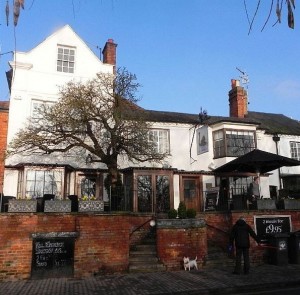 The pub showing its official sign, The Black Swan

In 1556 John Shakespeare’s first official appointment in Stratford was as ale-taster, requiring him to check the measures, prices and quality of beer provided by inn-keepers. As a market-town, Stratford always provided refreshment to visitors, locals and traders, and by the mid-nineteenth century the local Flowers brewery was making some of the best beer to be found in England. In 1851 the Board of Health listed all the Licensed Houses in the town, of which there were eighty-five. Many have since been demolished, changed use, or have different names. Quite a few owed their names to the town’s Shakespeare connection. There was once a Globe in Great William Street and a Falstaff Inn at the top of Henley Street. Others, like the Falcon, the Garrick and the Shakespeare Hotel itself have kept their names and are still trading today. Sadly, bearing in mind the number of scenes Shakespeare set in the London tavern, there has never been a Boar’s Head Inn in Stratford.

Part of Shakespeare’s Birthplace itself became a pub after Shakespeare’s time, the Swan and Maidenhead. Shakespeare was called “Sweet Swan of Avon” in the 1623 First Folio, and there are still several pubs in the town with “swan” in their names. 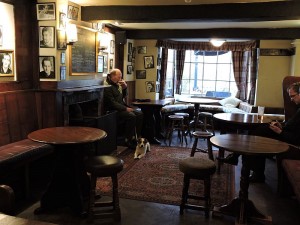 The bar at the Dirty Duck

Legends abound about Stratford’s pubs and Shakespeare’s links with them, usually vigorously promoted by their landlords. However I wasn’t aware, until I read it in notes written by Fred Morris, that the Black Swan/Dirty Duck at one time claimed a Shakespeare connection. He repeats the story, found in WS Brassington’s book Shakespeare’s Homeland, that the Dirty Duck “bears the reputation of having sheltered Shakespeare when he fled across the river from Sir Thomas Lucy’s men” (an event which probably never took place). The story continues that the Dun Cow Inn on the Birmingham Road (no longer in existence) “was the reputed rendezvous of the Poet and his companions after their poaching expeditions, and it is said that the venison was cooked before the ample fireplace of that inn”. Fred Morris adds the sad but accurate note that this is only a tradition. Although I never met him, Fred was my father-in-law and spent his retirement researching the history of Stratford’s many pubs. Most of his meticulous notes are now at the Shakespeare Centre Library and Archive where photocopies can be easily consulted. 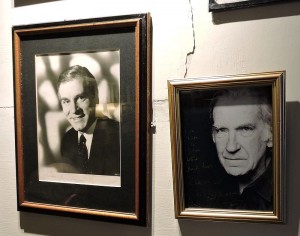 Laurence Olivier and David Warner share a space in the bar

The Black Swan/Dirty Duck, though, has a strong connection with Shakespeare that continues to this day and that makes it famous among visitors. For at least a century it has been the favourite drinking-hole of actors from the Shakespeare Memorial/Royal Shakespeare Theatres. The central part of the building has been a public house since 1738, known as the Black Swan since at least 1776. The bar to the right of the entrance was originally a separate house, incorporated into the pub in 1866 because of growing use of the river for pleasure. The building to the left became part of the pub in 1937. The bar is famous for the photographs of actors, many signed, that decorate its walls, and after performances it’s still the place where actors (and theatre audiences) gather for a drink.

The theatre’s connection with the pub goes back over 100 years. Len Parish (stage name Leonard Parrish) was part of Frank Benson’s company from 1910 to 1915, playing over 50 different parts including Old Gobbo in The Merchant of Venice and Bardolph in The Merry Wives of Windsor. A collection of his writings, including plays, poems and letters, are now at the Shakespeare Centre Library and Archive.

Many are reminiscences of his time with the Benson Company. One poem, entitled Stratford Ale, was written in the bar-parlour of the Black Swan, and is dedicated to three of his fellow-actors and drinking partners.  These are the first two verses: 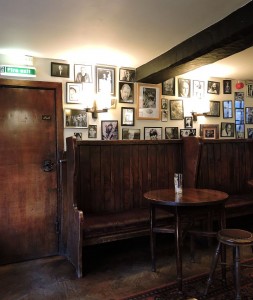 This golden ale of Stratford Town
Be the drink for good company
A tankard full, and over the brim,
No less than a quart for me;
And the same for the other three.

You old Jimmy and Frank and Mac,
Gad, but ‘tis fine to greet
You careless lads! See over there
The same old oaken seat
Where we – all of us – used to meet!

In Shakespeare, alehouses are places where the disreputable Falstaff and his cronies hang out, or where the foolish hold boozy, noisy parties. Malvolio, woken up by Toby Belch’s late-night party in Olivia’s kitchens, asks:
My masters, are you mad? or what are you? Have ye no wit, manners, nor honesty, but to gabble like tinkers at this time of night? Do ye make an alehouse of my lady’s house, that ye squeak out your coziers’ catches without any mitigation or remorse of voice? 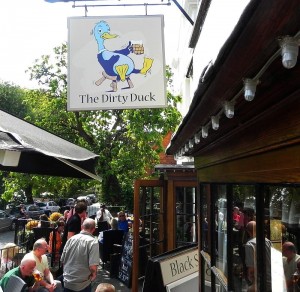 Stratford’s pubs nowadays, including this one, are more respectable, but I like the fact that the sign hanging outside the Black Swan/Dirty Duck shows both faces of the public house, the dignified Black Swan on the one side and the mischievous, boozy Dirty Duck on the side facing the theatres. I’ve heard that it was the actors who gave the pub its nick-name by which it is universally known, and it’s a tradition that’s unlikely to be changed.