Bidford-on-Avon and the Shakespeare legend

Back in June 2015 a farm vehicle struck the fifteenth-century stone bridge at Bidford-on-Avon, a few miles downstream from Stratford. Bidford was once, as Stratford still is, a market town and its bridge marks a crossing that goes back to Roman times. During the Civil War it was partially demolished by Royalist troops retreating from Worcester to Oxford. More recently it’s been damaged by flood waters, but this time “significant damage to the… stone parapet, spandrel wall and central pier”, means the bridge will be closed to motor traffic for some months, though pedestrians and cyclists are able to use it.

The narrow bridge is governed by traffic lights to make it one way, while people on foot cross carefully taking shelter in the refuges on the side. In Stratford, Sir Hugh Clopton’s bridge of the same age has always been grander, and has been enlarged over the years: it still carries much of the through traffic including enormous lorries though there are currently discussions going on about restricting traffic using it. Bidford’s little bridge always feels like a relic of a quieter past.

It’s a town with Shakespearian connections, mentioned in a piece of doggerel verse that is reputed to have been written by Shakespeare himself.
Piping Pebworth, Dancing Marston,
Haunted Hillboro, Hungry Grafton,
Dodging Exhall, Papist Wixford,
Beggarly Broom and Drunken Bidford. 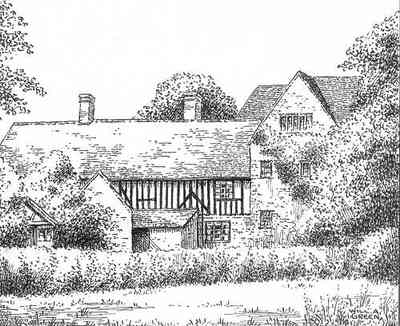 A print of Hillborough Manor from 1943

The villages mentioned in the rhyme: Pebworth, Long or Broad Marston, Hillborough, Temple or Arden’s Grafton, Exhall, Wixford, Broom and Bidford, are all situated to the west of Stratford, roughly in a triangle formed by Stratford, Alcester and Evesham. It’s not certain whether the villages ever merited their descriptions, but Papist Wixford could be a reference to the Catholic Throckmorton family, and the tiny hamlet of Hillborough contained an ancient manor house that might have been reputed to be haunted.

Bidford, the only place of any size, could well have been described as drunken. It had and still has several licensed premises, though the one in which it is reputed Shakespeare drank, the Falcon Inn, is now flats, still containing some sixteenth-century features. Bidford held markets, where farmers and those who came to buy and sell would need refreshment and maybe accommodation, and the river at Bidford, as in Stratford, was a working river, though little remains now. Gradually as Stratford became larger and busier, Bidford’s market declined. This article published in the Birmingham Post by Chris Upton gives lots of details.

Bidford’s reputation as a good place to go for a drink was undoubtedly promoted by the local innkeepers, and the connection with Shakespeare wouldn’t have done them any harm either. The rhyme quoted earlier relates to a drinking match in which Shakespeare is said to have taken part with other local lads, and the crab-apple tree under which he is said to have slept it off. I’m going to look at the legend of Shakespeare’s Crab in a later post, but I’ve been searching around to try to establish where the legend and the rhyme might have come from.

The fullest account comes in Samuel Schoenbaum’s book Shakespeare’s Lives (1970), which he wrote as a preliminary volume to his larger book William Shakespeare: a Documentary Life (1974). In it he investigated the myths and legends of Shakespeare’s life, bringing some much-needed clarity to a subject complicated by the sheer number of forged and semi-fictional accounts. 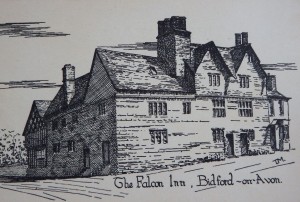 The Falcon Inn, Bidford, from a postcard

Schoenbaum finds that Sir Hugh Clopton, the eighteenth-century owner of New Place, told the story to the local schoolmaster Joseph Greene. Greene mentioned in a letter dated 1758 that he did not believe it. Then “an anonymous traveller, writing in The British Magazine in 1762 tells of putting up at the White Lion in Stratford, and being taken by the landlord to the village of Bidford, about seven miles below Stratford”. A version of the story was told by the notoriously unreliable John Jordan, who collected and elaborated many of the anecdotes relating to Shakespeare, but Jordan did not invent any major part of the story. Instead it seems to have been promoted by landlords both in Stratford and Bidford. Schoenbaum again: “A scene for the revelry would be found in a large building at Bidford once called the Falcon Inn; not only would the room be pointed out to admiring callers, but also the actual chair in which Shakespeare sat”.

One of the accounts of the drinking story, from The Gentleman’s Magazine in 1794, is available online. In it the author comments that “Shakespeare’s bench, and the half-pint mug out of which he used to take very copious draughts of ale at a public house either in Stratford-upon-Avon, or the neighbourhood of the town, are well-known to all our English Antiquaries”. All these spurious relics, like “Shakespeare’s chair” at the Birthplace “are melted into air, into thin air”, leaving not a rack behind”. Yet the legends that surround them are some of the most enduring stories about Shakespeare’s life.

2 Responses to Bidford-on-Avon and the Shakespeare legend