Hugh Quarshie looking for the Moor 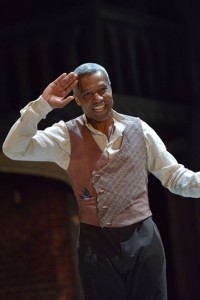 I wrote last October about the news that the distinguished actor Hugh Quarshie was to take on the role of Othello, with another black actor, Lucian Msamati, playing Iago. The story is that in an essay Quarshie wrote some years ago, he seemed to count himself out of playing the role, but was eventually persuaded by the Artistic Director of the RSC, Gregory Doran, who suggested that this was the right time for him.

The reviews of Iqbal Khan’s much-awaited production are now out and are universally favourable. Dominic Cavendish in the Daily Telegraph called the production “electrifying” and remarked: “it feels as though history is being made. A blow is struck for diversity without at all diluting the play’s perturbing power. The concept burns with molten intensity into the flesh of the evening. At a stroke we move beyond black-and-white ideas of racism as a motivator for Iago, and racial difference as the reason for Othello’s ruinous suggestibility. In this version, they’re both outsiders and that makes for a fascinating psychological dynamic. ” 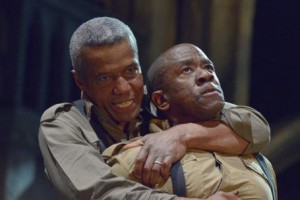 With a black Iago as well as a black Othello, the production seems to be making the play less about racism and more about psychology. In an interview with the Stratford Herald Quarshie suggested that audiences come to hear “the Othello music”, ” They are less concerned with the psychology than the magnificence of the emotion.” For Quarshie, though, “the problem for any actor playing Othello is marrying the two halves – in the first half he is mellow, astute and assured, but in the second half he becomes obsessive, insecure, riddled with jealousy and violent – this massive switch occurs in just one scene.” This production tries to find a reason for this sudden change other than the usual explanation that relates to Othello’s genes.

On 12 July 2015, that’s this weekend, Radio 3’s Sunday Feature at 6.45pm is entitled Looking for the Moor. It’ll be available on IPlayer after broadcast. This is the description from the Radio Times:
The actor Hugh Quarshie read Shakespeare’s Othello at secondary school. He was delighted to have a black man at the centre of the drama when he began the play, but felt that Othello was debased, a caricature of a “typical” black man – unpredictable and violent – by the end. Quarshie has enjoyed a successful acting career but has always turned down the role of the Moor, until now, agreeing to play it for the first time for the RSC. This highly personal feature has Quarshie ask other black actors, including Lenny Henry, Adrian Lester and James Earl Jones, how they square Othello’s sudden transformation from admirable hero to murderous wretch. They have all found a way. It’s a tragedy about a man – his ethnicity is immaterial.

In an interview with the Guardian, Quarshie suggested that “the play’s history on stage uncovers as much about the societies in which it appears as the play itself. “What we make of it tells us more about ourselves than it does about Shakespeare,” says Quarshie. He laughs: “I’m sure our production will be no different.” 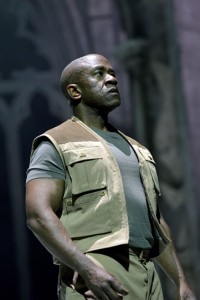 There’s a further interview with him on the Afridiziak website. Most of the media interest has been in Quarshie, but this production sees both Othello and Iago as outsiders, so here’s a link to one of the few interviews with Lucian Msamati, incidentally the first black Iago for the RSC.

At the RST on Sunday 9 August from 11-12.30 a debate is being held asking “Is Othello a racist play?”, which given the current production should be a terrific discussion.

The production is on until the end of August and will be broadcast Live from Stratford-upon-Avon to cinemas on 26 August 2015. Don’t miss it!

One Response to Hugh Quarshie looking for the Moor