Posted on September 7, 2015 by Sylvia Morris 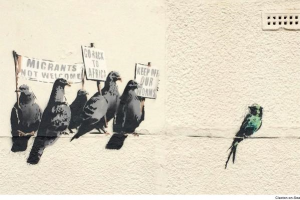 The story of the week: in fact the story of the summer, has been the displacement of people from war-torn and impoverished parts of the Middle East and Africa to Europe. It’s been described as the biggest refugee crisis since World War 2. Britain has a long tradition of helping people fleeing their own countries: since 1930 there have been the Kindertransport of children from Nazi Germany, refugees from Hungary, the Vietnamese boat people and Ugandan Asians.

It has been going on much longer than that, as a new website with its own online database reveals. Englands Medieval Immigrants has found evidence of over 64000 named individuals known to have migrated to England between 1330 and 1550, during the period of the Hundred Years’ War and the Black Death, the Wars of the Roses and the Reformation.

The evidence they have uncovered shows that the people entering England come from many locations, including distant countries. “It is also clear that these people were drawn from a far broader variety of social and economic backgrounds than just the upper echelons on which modern research has concentrated.” What sources have they used to find this out? “The greatest, and most valuable, is undoubtedly the records of taxes paid by the alien population of England from the mid-fifteenth century onwards. From 1440, a series of specific taxes, known as the ‘alien subsidies’, were levied upon first-generation immigrants resident in most parts of England”.

It’s been estimated that aliens made up around 1% of the population, more like 6% in London. In one year alone, 1440, the names of 14,500 individuals were recorded at a time when the population of England was only two million. The records revealed “a relatively wide geographical dispersion of the immigrant population, with individuals appearing not only in the major towns, ports and other economic centres, but in villages and smaller settlements across the country.” Most people, wherever they lived, probably had some direct contact with these foreign nationals, and the project is revealing how much they integrated or clashed with English people. Professor Ormrod, who has been involved in the project, said “The research provides a deep historical context for modern debates about the movement of peoples and the state’s responsibilities to regulate immigration.” 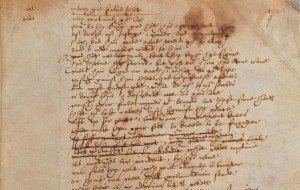 The Sir Thomas More manuscript, kept at the British Library

The play The Book of Sir Thomas More contains a series of scenes covering the events of the May Day riots of 1517, within the period covered by this project. Immigrants from Lombardy in Northern Italy are being threatened by Londoners who accuse them of taking jobs and money from the locals, and want them to be deported back to where they came from. The same arguments were being put forward at the time the play was written, with respect to Huguenot migrants. The play was never completed and exists in manuscript form in the British Library. In a series of speeches written by Shakespeare, Thomas More makes the argument for the humane treatment of those forced to seek asylum by being expelled from their home land. It’s surely never been made more persuasively.
Grant them removed, and grant that this your noise
Hath chid down all the majesty of England;
Imagine that you see the wretched strangers,
Their babies at their backs and their poor luggage,
Plodding to the ports and coasts for transportation,
And that you sit as kings in your desires,
Authority quite silent by your brawl,
And you in ruff of your opinions clothed;
What had you got? I’ll tell you: you had taught
How insolence and strong hand should prevail,
How order should be quelled; and by this pattern
Not one of you should live an aged man,
For other ruffians, as their fancies wrought,
With self same hand, self reasons, and self right,
Would shark on you, and men like ravenous fishes
Would feed on one another….
Say now the king
Should so much come too short of your great trespass
As but to banish you, whether would you go?
What country, by the nature of your error,
Should give you harbour? go you to France or Flanders,
To any German province, to Spain or Portugal,
Nay, any where that not adheres to England,
Why, you must needs be strangers: would you be pleased
To find a nation of such barbarous temper,
That, breaking out in hideous violence,
Would not afford you an abode on earth,
Whet their detested knives against your throats,
Spurn you like dogs, and like as if that God
Owed not nor made not you, nor that the claimants
Were not all appropriate to your comforts,
But chartered unto them, what would you think
To be thus used? this is the strangers case;
And this your mountainish inhumanity.

Here is Sir Ian McKellen, who once played the part of Sir Thomas More, delivering these speeches. If you do not wish to hear his explanation and preamble, the speech begins around 2 mins 30 seconds in.

For those receiving this post by email, to see the video go to the full blog, to which you will find a link at the end of the post.

7 Responses to Shakespeare, Sir Thomas More, and the refugee migrants