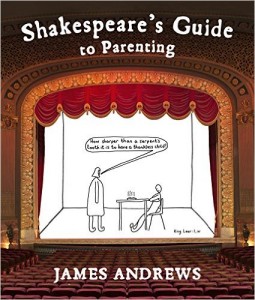 Shakespeare rarely describes a really happy family: in The Taming of the Shrew and King Lear the sisters compete vigorously, their fathers failing to understand their daughters, in Henry IV the king misjudges his young son Hal, Juliet’s parents both disown her when she shows signs of independence, and so on, and so on. There are few mothers in Shakespeare’s plays, Volumnia in Coriolanus being the most ferociously ambitious. The most-loved parents are often the ones who aren’t there, like Hamlet’s father, Viola’s in Twelfth Night, or Helena’s in All’s Well That Ends Well. All too often Shakespeare’s characters seem to be adrift. Even when they have close family ties the children are let down by their parents. The Comedy of Errors is unusual in that at the end, by a series of comic coincidences, a whole family is reunited. It’s rather odd that Shakespeare used this device at the very beginning of his career, then came back to it at the very end in The Winter’s Tale after putting his characters through sixteen years of loss and heartache. It’s still a sober ending, remembering the death of Mamillius.

Shakespeare looks at family life from the points of view of both parents and children. Parents are often exasperated by the obstinacy of their offspring, and as a parent himself it’s easy to imagine that Shakespeare sometimes found it difficult to be a father. 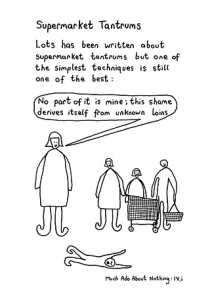 I’ve just been sent a new book that’s made me laugh out loud more than once as I’ve browsed through its pages. James Andrew’s Shakespeare’s Guide to Parenting takes Shakespeare quotations and pairs them with cartoons of situations in modern family life. It’s very much on the parents’ side, and grouped by the sort of situations they will almost certainly find themselves in. Quoting the book’s publicity, it’s “a humorous compilation of parenting wisdom from the Bard, cunningly extracted from his best-loved plays… Forget Super Nanny and the naughty step – this handy pocket-sized book will help long-suffering mums and dads know exactly what to do, and say, in every parenting eventuality”. It also casts quite a new light on some familiar and not so familiar quotations from Shakespeare. If you’re looking for a gift for a new parent, take a look at this delightful little book.

This entry was posted in Legacy and tagged family, James Andrews, Shakespeare's Guide to Parenting. Bookmark the permalink.