James Shapiro on Shakespeare in 1606 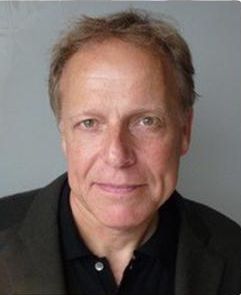 Back in 2005 James Shapiro published his book 1599, about a single year in Shakespeare’s life. According to Jonathan Bate, who reviewed it for the Telegraph, It was “one of the few genuinely original biographies of Shakespeare”, the year an “inspired choice”.”It was a year when Shakespeare’s equal gifts for history, tragedy and comedy were on display: the year of Henry V, Julius Caesar and As You Like It. They were acted against a backdrop of high political drama: a severe mess in Ireland, rumours of another Spanish Armada, a Bishops’ ban on subversive satirical poetry.”

Shapiro examined contemporary books and documents to try to work out more about the world in which Shakespeare lived. He read extensively: everything published in that year, letters and other documents. No wonder it took him 15 years to write. He asked all kinds of questions. Knowing that Shakespeare’s company played at court over the Christmas holidays, he found out what visitors might have seen when they arrived at Whitehall Palace. Bate paraphrases: “a needlework map of Britain, a portrait that was ugly or beautiful according to the perspective from which you looked at it, a wind-up clock in the shape of an Ethiop riding upon a rhinoceros, and an array of other curiosities.”

1599 was a very well-documented year in Shakespeare’s life, but the same is not true for his earlier years. In this article Shapiro explains that Edmond Malone, a serious scholar frustrated by a lack of documentary evidence about Shakespeare’s life, “began sifting the plays for allusions to contemporary events and court intrigue,” which encouraged other interpreters to scour the plays in search of clues hidden there by their author. Shapiro writes, “Malone helped institutionalize a methodology that would prove crucial to those who would subsequently deny Shakespeare’s authorship of the plays (after all, the argument runs, how would anybody but a court insider know enough to encode all this?).” “You shouldn’t”, he says, “really read his life out of the works”, but it was a method used for centuries. 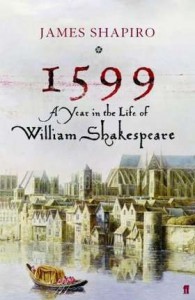 If you’ve read 1599, you won’t have forgotten that the book opens with one of the most dramatic episodes in Shakespeare’s theatrical life. The demolition of the Theatre north of the river after their lease had run out, the moving of its timbers over the Thames, and the building of the Globe on Bankside. In most biographies, this is dealt with in a couple of paragraphs, but Shapiro has the luxury of being able to speculate on exactly what this might have been like.

“As darkness fell on 28 December, the old frame of the Theatre, loaded onto wagons, with horses slipping and straining from the burden of hauling the long half-ton, foot-square oak posts, began to make its way south through streets carpeted with snow”.

Shapiro’s method of writing, inevitably, means that he has to imagine events in Shakespeare’s life. But by putting just a single year under the microscope, and using known, verifiable facts as background, he is able to put Shakespeare into the context of his times effectively. It won him several awards, and encouraged him to move onto his next big project, 1606. This has taken him only ten years, with a break to write Contested Will about the authorship debate. 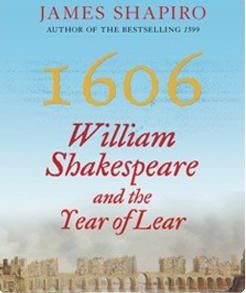 1606: William Shakespeare and the Year of Lear is just out, and would appear from its title to follow the same award-winning formula, this time covering an early year from the reign of James 1. While the conflict in Ireland seemed to dominate 1599, 1606 is presumably overshadowed by the Gunpowder Plot of November 1605. Shakespeare tackled not just King Lear but also Macbeth and Antony and Cleopatra, plays with a very different feel from those in 1599, reflecting changes in Shakespeare’s own life as well as that of the country. Shapiro is currently promoting his new book with a series of talks and book-signings. On Saturday 3 October he will be at the Shakespeare Centre in Stratford-upon-Avon talking about the process of researching and writing about Shakespeare with a man who knows more about it than almost anyone else, Stanley Wells, and on October 7 he will be at the Folger Shakespeare Library in Washington DC. This link goes to a podcast of Shapiro in discussion about the book.

For those of you unable to get to either of these, here is a link to James Shapiro’s website that contains lots of information about his work, and here is a clip of Shapiro himself talking about the new book. Those of you receiving this by email may need to click on the link to the full blog in order to get the video.

This entry was posted in Legacy, Shakespeare's World and tagged 1599, 1606, Contested Will, Edmond Malone, James Shapiro. Bookmark the permalink.

5 Responses to James Shapiro on Shakespeare in 1606